“Hello?”
“Do you see anyone?”
“Shh!”
“Well, do ya?”
A head poked out from the open door. “No. There’s no one here.”
“Gavin, how could that be?” A red-headed boy followed the first out of the doorway.
“Do you think we’re late?” Another voice spoke from the doorway.
The boy called Gavin turned and spoke to the others. “Don’t think so. If anything, I figured we would be early.”
All three cautiously entered the room.
“Look here,” the red-headed boy pointed to the table and chairs. Sandwiches and a pitcher of water set on the table.
“Food and drink. We must be in the right place,” the third boy spoke.
“Our author just must be late,” the red-headed boy replied.
“I think you’re right, Bryan,” Gavin said. He slapped Bryan on the back. “Let’s sit down. I’m kinda hungry.”
Gavin and Bryan sat down.
“Come on, Philip.” Gavin motioned to the other boy still standing. “Join us. None of us has eaten since dawn. You must be hungry, too.”
Philip smiled and sat down.
For several moments no one spoke while they ate.
“Well...” Philip pushed away from the table. “What do you think they are going to ask us?”
“I thought that Cheryl said it would be about The King’s Ransom,” Gavin answered.
“She did. Remember she told us not to reveal any of the book’s secrets,” Bryan added.
“Should we go over what to say,” Philip asked. “I don’t want to say the wrong thing.”
“We could practice, I guess.” Gavin looked over at the door. “Doesn’t appear to be anyone close by.”
“When we introduce ourselves, should be use our titles?” Bryan asked.
“No bloody way!” Philip shook his head. “Only Prince Gavin. Ours would give away the ending of the story.”
“Okay. Then maybe Gavin could tell about the setting of the story,” Bryan offered.
“Right. I’ll tell how the book is set in Wales around the 5th century.”
“You can also tell them that St. David’s Head is a real place on the western coast,” Philip added.
“Yea, and be sure to tell them about Cardigan Bay. I may die there.” Bryan said.
“You’re not supposed to tell that!” Philip punched Bryan in the arm.
Gavin glared at each of them. “I’ll tell about those places, but first I have to let our readers know that my home Pembroke Castle and Manorbier Castle are also real and still standing today.”
Philip and Bryan nodded.
“Don’t tell them about the ghost at Manorbier Castle,” Philip reminded him.
“I won’t.”
“We have to tell about The Wild Man,” Bryan said.
“Just so we don’t tell too much about him,” Gavin said. “It’s okay to say that The Wild Man is our friend and accused of murder.”
“Yea, and we can tell how the three of us swear on the Knight’s Oath to help him,” Philip butted in.
“Right,” Gavin said.
“Can we tell about the witch?” Bryan asked.
Gavin and Philip both shook their heads.
“What about saying something about our author?” Bryan tried again.
“We could do that,” Gavin agreed.
“She must like King Arthur.” Philip explained. “We’re the second book she’s written that takes place during his time.”
“That’s right. She also wrote about Queen Guinevere when she was around our age.” Bryan added.
“It’s called Guinevere: On the Eve of Legend,” Gavin chimed in. 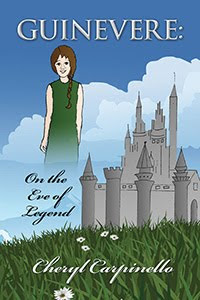 Philip walked over the to window. “Shouldn’t someone be here by now? I mean, after all, it’s supposed to be an interview.”
Gavin shrugged his shoulders. “I wonder if we got the day or the time wrong?”
“I don’t know, but it is getting dark outside. We need to think about getting home.” Philip pointed out the window.
“It’s not even supper time, the sun can’t be going down already, not in the spring!” Bryan joined Philip at the window.
“Unless it’s not spring.” Gavin came over also. “Look how low the sun is on the horizon. It’s not spring! It’s the middle of winter!”
“Well, no wonder no one’s here to interview us,” Philip stated. “We not supposed to be out until the spring. We are early.”
All three looked around uneasily.
“Do you think they’ll notice that some of the food and water is gone?” Bryan whispered.
“What do you think? Let’s get out of here while we still can,” Gavin led the way to the door they came in.
“What do we tell Cheryl?” Philip asked as they slipped through the doorway.
“Nothing!” Gavin and Bryan replied.


Sorry. My crew showed up early. Look for more from them this spring!

Cheryl Carpinello
Beyond Today Educator
Posted by ccarpinello at 12:01 AM

Email ThisBlogThis!Share to TwitterShare to FacebookShare to Pinterest
Labels: cheryl carpinello, guinevere: on the eve of legend, king arthur legend, middle grade adventure, the king's ransom, young knights of the round table

These characters sound delightful, Cheryl. Glad they at least got to have a snack!

Thanks Pat. I hope they are as entertaining in May! Appreciate you stopping by.

Love the way this was written! Can't wait to hear about the rest of the characters I. The spring.

Loved the innovative introduction to your characters! Glad you're putting places like Pembrokshire on the map!

Thanks Finding ME. Glad you could stop by!

Hi Maggie. Thanks for stopping by. I skipped over to your web page and Love the design!
I plan to visit Pembroke Castle in the very near future. Can't wait to see the beautiful country of Wales.

Remind me again in the spring because I don't want to miss this one. Very cute introduction!

Be glad to Sharon. Thanks for stopping by. Visit me on FB and send me your email address.

Glad you like my website, Cheryl. The first book I wrote, by the way, is set in Pembrokeshire and my son's name is Gavin.

Fabulous cast! Glad to see other folks' characters run away from home now and again!