Some writers fear the dreaded POV (point of view) change when writing. Others go crazy with POV changes, sometimes in the same paragraph (that's a big no-no, by the way).

Mysteries are more likely to have multiple POVs since it's fun to be in the head of both the good guy and the villain. There's another use of changing POV in mysteries: the eyewitness flaw. Anybody associated with trials can tell you the worst witness in the world is the eyewitness. People see what their own biases and prejudices dictate. Eyewitneses also have terrible memories, and can't estimate height and weight worth a darn. Unreliable to say the least.

Another multiple POV method is called the Rashomon Effect, in honor of the great Samurai movie of the 50s, directed by Akira Kurosawa and starring the wonderful Toshiro Mifune. Isn't that a great poster for the film? A Wiki article lists several more examples of the technique used in popular culture.

This quote from Wiki is quite good: The Rashomon effect is the effect of the subjectivity of perception on recollection, by which observers of an event are able to produce substantially different but equally plausible accounts of it. 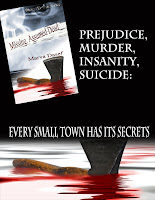 In my mystery, "Missing, Assumed Dead," several characters are relating to the main character, Kam McBride, what had happened in the past (a flashback). To avoid simple telling, I switched to another character's POV. I delineated these flashbacks into scenes, and even made them italic to set them off from the narrative.

The fun part is that the characters are relating the same incident to Kam, but each one has a slightly different view of the events, usually making themselves a bit more heroic than the other people in the same scene. This allows the reader to be suspect of the truthfulness of the characters.

In the film, a crime occurs, and the film maker presents it four times, each from a different character's POV. Needless to say, the versions of the events vary, sometimes wildly, from each other. By the end of the film, you still don't know exactly what happened since none of the characters can be fully believed.

In addition to the contradictory retelling of the events by the different characters, there are two additional flashbacks. By the time they appear in the book, I hope the reader will be looking at everyone with suspicion.

Here are a couple of excerpts from "Missing, Assumed Dead," illustrating the Rashomon Effect in action. Two characters, Ray and George, describe their meeting to discuss the disappearance of Salvadore Vasco, the missing man of the title. Same event, but a big difference in their perceptions.

Ray went up the three steps into the Courthouse and turned left into George’s office. The self-appointed police chief sat behind his desk with his boots propped up on it. He raised his eyes from the Zane Grey novel he’d been reading.

“Why sure, Ray. I’ll head up tomorrow morning for a welfare check.” George stood and walked around his desk. He patted Ray’s shoulder to comfort him. “You go on home and don’t fret. George is on the job.”

What a different direction the story takes depending on who's telling the tale.

When Kameron McBride receives notice she’s the last living relative of a missing man she’s never even heard of, the last thing she wants to do is head to some half-baked Oregon town to settle his affairs. But since she’s the only one available, she grudgingly agrees.

En route, she runs afoul of a couple of hillbillies and their pickup in an accident that doesn’t seem...accidental. Especially when they keep showing up wherever she goes. Lucky for her, gorgeous Deputy Mitch Caldwell lends her a hand, among other things. Her suspicions increase when the probate Judge tries a little too hard to buy the dead man’s worthless property.

Working on a hunch and trying to avoid the Judge’s henchmen, Kam probes deeper into the town’s secrets and finds almost no one she can trust. With Mitch’s help, she peels away the layers of prejudice, suicide, murder, and insanity. But someone in town doesn’t like her poking around, and when they show their intentions by shooting her through the police chief’s office window, the stakes are raised. Kam must find out what really happened to her dead relative before someone in this backward little town sends her to join him.

And she thought Oregon was going to be boring.
Posted by Cellophane Queen at 12:00 AM

How true with regard to POV of the eyewitness. We think we see what happened when what we've recorded in our brain is what we think we saw.
a key reason why legal thrillers are always in vogue on the big or small screen.
PD

Yes, the reader gets all sides of the story with your POV switch, but you wrote it so well it doesn't confuse the reader. I like this method of telling the story. Missing, Assumed Dead is a favorite of mine.

Thanks, Ms. Rose. I did have some early readers who were stymied by the technique. They'd tell me that my facts didn't gibe between two different accounts. I'd say, that's the point.

I think the TV show, Cold Case, uses the technique very well and in every episode. Is that still on? I know it's re-syndicated to other channels. I think their story telling techniques are superb.

I read Missing, Assumed Dead this past weekend and loved it! I love to switch POV's (logically and clearly of course, so that an editor's wrath doesn't flow around my head)because life itself is told in different POVs. None of us ever see the whole story in real life, of course, because we're not privy to the complete POV of those around us. But that's a gift we have as writers. Bit by bit and piece by piece, all the POV's converge and head for the punch line!