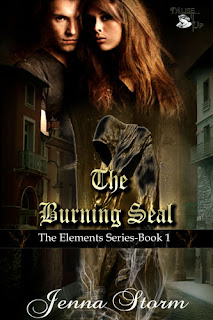 Detective Danni Keegan is plunged into a dark, demonic world where survival depends on deciphering the connection between ritual killings, and a demon terrorizing her for a “gift” she wasn’t even aware she possessed. She must unravel her dreams of another woman who lived during ancient times and battled a bloodthirsty demon—the same demon who now hunts Danni. The loss of her body and soul looms imminent as her only chance to destroy the demon depends on changing her new partner’s convictions. He is a sinfully sexy man, who exudes power and self-assurance with the ease of breathing and has an iron-willed determination not to believe in the paranormal.

Excerpt:
Danni Keegan pulled back the wispy curtain to peer through the thick rivulets of rain and search the swaying trees and bushes. She put her fingers to the glass and welcomed the chill as it traveled through her body. Maybe the cold would paralyze her tragic thoughts, end the feeling of dread, the vengeful tide that sought to drown her.
Her hand came off the glass and returned to the curtain where her nimble fingers fidgeted with the lace. For weeks now, the doomed feeling had fed on her, no better than raging piranhas hungering for fresh meat. She was the fresh meat. Every day the fear escalated, chewed off more of her flesh; exposed more of her vulnerability.
Get control of yourself. You didn’t make it as a cop by fearing the dark, or letting a feeling rule your head. Yet, her uneasiness gnawed, the cause was elusive, unsupported by evidence. Were Lucy Brighton’s and Chelsea Marlin’s unsolved homicides warping her sanity?
No matter how tough she acted, it was impossible to view ravished remains and not mourn lost lives. Question your own mortality and blame yourself for not stopping the homicides. Was she confusing her edginess with guilt that the killer remained free to hunt new victims?
Her fingers beat the glass in a staccato tempo which matched her heart’s unsettled rhythm.
No. This evil feeling, it was blacker.
More menacing. More...enduring.
She cast a wishful glance at the wide-cushioned sofa and the television. Her bagel and cream cheese lay neglected on the coffee table along with the horror novel she was reading. Anchored to the window, she scanned the looming trees and thick darkness for a shadow that didn’t fit. A forceful wind scraped tree limbs against the condo's roof and the windows wept from the torrential downpour.
She leaned forward and focused, as if she could frisk the shadows with her eyes. The bushes along the sidewalk shook in a way that was at odds with the direction of the wind. A clump of white bolted from tangled branches and frost-burned leaves. Realization dawned and the sight of the familiar lithe body made her smile, partly from relief, mainly from her foolishness.
The porch was clear except for a very drenched, very vexed cat. A stray who sporadically allowed Danni to mother her.
She hurried to the door and twisted the bottom lock, but when it came to the deadbolt she wavered,  her fingers refusing to close over it.
Don’t. Open. The. Door.
A warning slithered through her body, stroked her apprehension and added high-octane fuel to her fears. More like a premonition. Blood. Destruction. Innocence lost. She stared at the top of her fluffy-socked feet and scrunched her toes against the hardwood floor.
"This is stupid. Letting poor Independence drown in this storm because of a feeling."
Flexing her hands, she thought of her gun tucked in the nightstand drawer; thought about getting it. To what, shoot at trees and darkness?
She twisted the lock and stepped out, playing hopscotch with the growing puddles on the small cement porch. Frigid wind and freezing rain pushed at her. She sucked in a breath, pulling her robe tighter. The sensation of standing on solid ice seeped through her socks. Before she could cajole Independence inside, the cat darted to the right, into the heart of the storm.
“I’m not chasing you,” she called out and shoved her hands into her robe’s pockets, shuffling from side to side on cold, wet feet.
Damn. Now she’d have to change her socks and throw her damp robe into the dryer.
A warning sparked from the rustle of dead leaves. Overgrown bushes at her left shook.  Branches snapped. The cautionary spark exploded into a bonfire of fear. Her breath halted. Thoughts seized. Everything froze except time.


Posted by MuseItUp Publishing at 7:17 AM

Sounds like an intense story with a great protagonist.

Terrific extract. I feel for Independence. Hehe. Love the nail biting tension and the touch of humour.