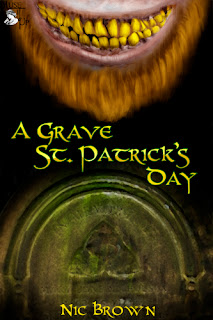 
A Short Story by: Nic Brown
Genre: Horror Fantasy
Release: March 16, 2012
Cover Designer: Mike Zambrano
Pages: 26
ISBN: 978-1-927361-48-1
MORE INFO/BUY PAGE
Back Cover:
Stuart Boling doesn’t believe in magic or the supernatural. But when a visit to his family’s grave site leads him to stumble upon the pot of gold at the end of a rainbow he starts to change his mind. Now he must face its strange guardian, a malevolent leprechaun.  Stu learns that he’d better be careful what he wishes for as the creature brings him face-to-face with the demons from his past, made into monsters of the flesh.  If Stu doesn’t figure out the leprechaun’s secret he may just join his family in the grave.

Excerpt:
Then as abruptly as it started, the wind stopped. Stu dropped his arm just in time to see the leprechaun, suspended in the air about ten feet above him, look down and wink.
At that moment Stu felt a presence. He was no longer alone in the cemetery. There were three figures moving in the darkness of the nearby trees. They ambled slowly up behind the leprechaun as he gently floated back to the ground. It was his family. They were alive and coming toward him.
“Kelly!” Stu rushed forward past the leprechaun and grabbed his sister in his arms. She was wearing her favorite purple dress, the one they’d buried her in. She looked confused and didn’t speak. That was okay. After all, she’d been dead.
He set her down and put his hands on her shoulders. “Kelly, it’s me. It’s Stu. You’re alive.”
She bit him.
She grabbed his left arm and sank her teeth into it. Stu screamed and tried to get her loose from his arm but she was locked onto it tight.
“Kelly!” Stu was shocked, but he had been trained to fight and he’d taken to that training like a duck to water. Without even thinking, he smashed out with his right arm, catching his sister squarely in the side of the head with all of his might. Her head snapped back and she stumbled away from him. Blood, dark and black, trickled thinly from her mouth. He’d hit her in the left side of her face and now that cheek hung in bloody tatters. A small part of his mind wondered why she was bleeding, embalming removes the blood from a body, but that tiny, rational thought was lost in a sea of shock and horror. Kelly’s beautiful face was destroyed, her tongue rolling around inside her mouth. Several of her teeth were clearly broken off. Her head lolled to the side and he could hear bones popping and cracking. The jaw hung down loosely, as though no longer fully attached to her head.
Stu grabbed his arm. Despite the pain and the unbelievable strength of the bite, she hadn’t broken his skin, thanks to the denim jacket. Still, it had been close.
“Jesus Christ!” Stu turned to the leprechaun who was lying on his back on the ground, clutching his sides and laughing, as his mother stood swaying slightly off to one side. Stu couldn’t see his old man anywhere.
“What have you done?” Stu shouted and the small figure sat up. The leprechaun was laughing so hard that tears were coming from his eyes.
“I did exactly what you wished for laddy.” He spat between chuckles. “I brought your family back to life. You didn’t say you wanted them to have their souls back though, did you? That costs extra. I just brought them back from the dead.” The leprechaun doubled over in laughter.
Posted by MuseItUp Publishing at 3:35 PM

This is definitely a book to be read with all the lights on!