A Paranormal Professor Speaks Out!

In 1975 I acquired a collection of antique, but damaged manuscripts after a mysterious fire beguiled the dim British authorities for four years.  Somewhere along the frontier between England and Wales, in a crumbled vault beneath a burned mansion; dozens of leather bound journals, diaries, and books were rescued.  Their contents were fantastical: histories, ages of vampiric accounts, coven wars, and abstract chronicles. The police, of course, uneducated in such matters of the occult or the unexplained, found the material rubbish against their modern case in need of evidence and forensics.
Fortunately, in my subsequent studies and adventures, I have found that truth is indeed stranger than fiction. You must forgive me the cliché, but my analysis and preservation of these personal antiquities has brought me to new heights of bizarrity, both on the page and in the flesh.  I thought I was a wise, aware professor knowing beyond the day-to-day world before I came to read of this twisted Vampire Family.   My pride was in err.
After several lengthy years of study and a very slow restoration process on the oldest documents, I succumbed to an offer of assistance from a student named Theodore Plunkett.  A scholar of ancient languages, Theodore’s detailed list of degrees and credentials were too numerous for his youthful appearance.  His intelligence was vast; yet he was a personal master at comprehending and restoring the fantastic tales of Antonio Welshire and his mad family’s descent into the dark world of vampirism.  From patriarch Antonio’s brutal human days to the coven’s near destruction by the rival Lilithan vampires and the ambiguous Mestiphles’ meddling appearances and disappearances; this Vampire Family’s history is very well documented through some centuries and bare and bleak in others. Some journals are utterly disturbing in their tales of blood and mayhem while other diaries are strangely heartfelt, bittersweet, and uncomfortably endearing.
The fire that brought these texts into my possession was education blessing enough-the lifetime epitome of Tut and Troy to most scholars.  Some library men would be content to sit behind their musky parchments and read the decades away.  I, however, have had the unique privilege of authenticating these documents as truth.  Of course, that wasn’t until many years later; when Theodore arrived at my office door looking as young as the day we first met.  On the plane to Philadelphia, I never suspected I would arrive at the doorstep of sisters Samantha and Victoria Welshire.  I had read over five hundred years of their tall tales; yet here the startling beauties were, living and breathing before me fangs and all.  Only then did I begin to realize the full extent of this familial coven.
The academic community may disagree with my claims; but this dark, sensational and unbelievable underground lifestyle has afforded me considerable gains.  Today I live a quiet life among the Welshires, and their vast knowledge of history and the world has blessed me intellectually as well as financially.  In this simple, ignorant time obsessed with youthfulness and beauty, I’ve seen immortal creatures age, know love, feel pain-even die and regain their humanity.  I myself have been able to change; embracing surgeries and procedures I would not have considered before coming to know the Welshires.  With no evil or nefarious means, this vampire knowledge and power has made me a new man inside out.  It’s something I could never have fathomed before these burned books first came my way.....
-
Lore:
Forward by Professor A. James, Fate and Fangs: Tales from the Vampire Family Books 1-7 On Sale now with Muse It Up Publishing. 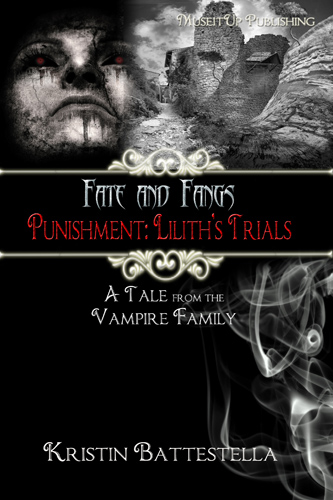 Hi Kristen,
Great interview with Prof James. What an amazing education he had. This is a terrific introduction to your novel.
Congratulations on a terrific series.

Hi Roaslie! Thanks for taking the time to come by and comment.

Yes, the Professor is a strange fellow. He's just so unbiased in his occult expertise and yet he factors directly into the narrative himself- perhaps with a vampire lady friend! No, no conflicts of interest at all! ;0)