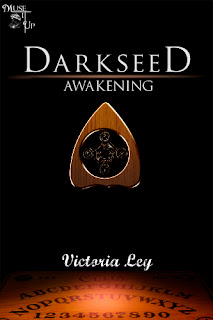 Christina picked up the cardboard and held it carefully. She sat quietly for a few seconds, as did Sarah whilst she let her friend collect her thoughts. “Bloody hell!” Christina dropped the card so suddenly Sarah jumped, and the taller girl sat
back and pointed to the card. “Sarah! The writing I saw...”
Sarah gasped. “Oh my God! Do you think it’s ‘Stuart’ who led us to the cupboard?” She reached forward for the card to make out the name for herself, but Christina grabbed her wrist.
“No,” she said softly, “don’t touch it.”
Sarah was taken aback by the warning, and watched dumbstruck as Christina looked from her to the card. “It didn’t say Stuart. There weren’t any words.”
“But you saw it?”
“I didn’t. I saw letters.” Catching her friend’s expression, she proceeded gently.
“Consecutive letters, Sarah. ‘S,’ ‘T,’ and ‘U’. Guess what comes next?”
“The alphabet? Why?” The look on Sarah’s face told Christina she needn’t answer. Realisation was occurring, and the smaller girl’s eyes enlarged as she breathlessly concluded, “A Ouija board!”
“They were using it when the tree came through.” Christina nodded. “This could’ve been the last thing they saw.”
“What? How the hell could you know that?”
“Because I’ve just realised what the stain is.”
Sarah stared at Christina for a long time before finally looking down. The rotting card had left a trail of rusty flakes from the cupboard to her feet, and as she mentally linked the stain to the boys deaths, her stomach rolled. Bile pushed itself through Sarah’s throat and into her mouth, and she gagged as she tried to suppress it. Instinctively covering her mouth with her hands, she pulled them back quickly and heaved again as she was fronted by the sight and smell of the old, dried blood that clung to her palms. Christina looked at the floor in silence as Sarah sprang to her feet and ran across the carpet, managing to open the bedroom door with her elbows before escaping out into the bathroom. Folding over the toilet, her lungs burned with every contraction, but she encouraged it, and it was only when the sound of vomit splattering into the pan floated back into the bedroom that Christina joined her.
Posted by MuseItUp Publishing at 9:53 AM