I’m happy to share a couple teasers from my YA multicultural fantasy EARRINGS OF IXTUMEA. 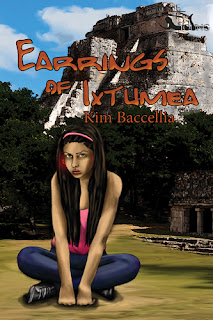 Earrings of Ixtumea
by Kim Baccellia
Young Adult Paranormal
BOOK DETAILS
Fourteen-year-old Lupe Hernandez dismisses the legend about her Mexican grandmother's magical earrings as a silly fairytale, despite recurring nightmares of human sacrifice. But when the earrings thrust her into the parallel world of Ixtumea, she must confront the very thing she shuns the most -- her cultural heritage.
I chose this scene to share as it’s the first time Lupe meets the Spider Goddess.  On Earth, Lupe hates spiders so the idea that she has to work with a Spider Goddess is kind of ironic.  She later learns much from the goddess.
Lupe slowly got up off the ground, shaking her head in disbelief. She felt as if she’d woken from a weird dream. But the painful scrapes on her body told her otherwise.
Clasping her medallion, she stared once more at the place where Teancum had just stood. Nothing remained of his presence.
A dull empty ache gnawed at her. She wanted Teancum. She missed his touch, his smile. How could she find Ixchel without him?
Then something to the side caught her attention. No, it couldn’t be. Shielding her eyes, she took another look.
A crumbling rock building of some kind came into view. It looked old and forgotten. Two pillars guarded the entrance. Rust colored rocks lined the sides. On the ground scattered flower petals trailed toward the collapsing building.
Curious, she picked up a petal. When she rubbed it between her fingers she got a whiff of licorice.
She followed the trail of marigolds. A stone door stood slightly open. The off-white granite seemed out of place with the broken up cobble stones.
Her curiosity piqued, she approached.
A humming echoed in her ears. Lupe touched her earrings and flinched. They burned her fingers. So she’s in here. Her earrings vibrated even louder.
What might be lurking inside? She trembled in fear. Lupe inhaled deeply and ventured in. Cold air hit her, shocking her body. Total darkness had her disoriented for a moment. Her eyes readjusted. The dripping water echoed.
She touched a wall and encountered a slick finish, slimy and wet. She put her hand to her nose and grimaced. Yuck! It smelled like rotten eggs. She didn’t want to rub the offensive substance on her clothes. How gross would that be? She’d probably smell like fermented egg salad by day’s end.
As she removed her hand, loose dirt and pebbles slid down the wall. She leaned over and caught a glimpse of faint light. She followed the flickering beams, hoping to find the source.
Small dark forms hung further down the walls. Lupe took a tentative step. A flutter caused her to look up. As her eyes adjusted she made out groups of something huddled together.
One detached itself and flew overhead. Eew! Hundreds of bats covered the walls. Their membrane wings beat frantically together. The bats protested her disrupting their sleep by emitting a shrill cry. Lupe ducked as other bats followed, screeching upward.
She wanted to run out, away from the disgusting bats. Didn’t they carry rabies or something? Okay, I’m really starting to freak out. But once again Kish’s warning flashed through her mind. How both Ixtumea and her real world depended on her.
She grimaced at the bats. Okay, I’ll do this, but I don’t have to like it. She moved on.
Farther down, a large hole appeared in the ceiling. Hazy light radiated from the gap. Everything had a yellow tinge to it, intensifying the creepiness. Lupe followed the light into the cavern. Her sandals sloshed through liquid. The narrow pathway opened up. She stepped into a cavern, the darkness making it hard to see all the walls. A giant spider-web stopped her in her tracks.
She stared wide-eyed at what hung down from the ceiling. A huge web, its thin opaque strands, funneled down onto a small lake. The ends barely touched the black water of the underground lake.
Ohmygod! She felt the blood drain from her face. If she hadn’t seen it herself she wouldn’t have believed it. The gigantic web reminded her of one of Abuela’s lace tablecloths that covered the ofrenda back in her bedroom.
Intricate patterns weaved back and forth, cascading gracefully. Gaping holes were shattered throughout, destroying the symmetry of the design.
The damp cave gave Lupe chills. Rubbing her arms to get warm, she stared at the massive web. Dew glistened like jewels on the strands. In the middle of the web a large shadow appeared. It looked like a huge stain on otherwise pure fabric. The black shape glided down the thin strands, making its way toward her!
Her heart seized in her chest.
A voice called from within the spider web. Like an older woman’s voice, deep pitched and soothing, it called, “Do not be shy, Lupe. C’ome c’loser.”

This next teaser is from a deleted scene.  Malvado calls on Chiza, to spy on Lupe while she’s in Ixtumea.

“You know what needs to be done.” Malvado’s face wove in and out of the web in the cave of Ixchel.  Using the web as a means of communication was frustrating but time was running out.  He had to use whatever he could to get Lupe to him or else all his plans would turn to dust.
Chiza glanced around, her hood covering her face.  Malvado silenced a chuckle. It would prove funny for the goddess to return early and take care of this pathetic villager.  He could use some entertainment right about now.
“But, my lord, if anyone finds out I will...”
Malvado narrowed his eyes. “It’s too late for that now, isn’t it?” He stretched back in his fur-lined throne and yawned. “What makes you think you are so special?” He leaned forward.  “Do this simple task and you will be richly rewarded.”
Chiza’s top lip quivered. A drop of sweat dipped down her face. “Thank you, my lord.”
Malvado sighed, disgusted with her. “Go and get Lupe to trust you.”
“What about Abish?” Anger clouded Chiza’s features. “You know I should be the head maiden, not some huafanita-orphan from up North.”
An image of putting this obese self-important maiden to slow torture played through his mind.  Chiza rambled on; each word she spoke another knife tore through her flesh.
“Kill her.” Malvado yelled into the web.
Chiza stopped. “What?”
“You heard me, just kill her. Then you will have the calling you so crave.”
Chiza glowered. The sight made Malvado sick to his stomach.  Another knife joined his fantasy, along with a high pitched squeal from Chiza. Oh, how long do I have to listen to this witch?
“Yes, my lord. I will do it.” Chiza’s eyes narrowed. “Believe me, after I’m done with her, no-one will question the true Revered One.”
Ah, so that’s what she wants?  Malvado turned away, faking a cough. Let her dream, as long as I get what was promised to me.
“Go and fulfill both our destinies.” Malvado flicked his hand and turned away.
Chiza glanced over her shoulder.  “Someone is coming. I have to go.”
She covered her face, rushing out of the cave.
Usually Malvado would punish such behavior but the fat maid disgusted him.  Once she fulfilled her duty, then he’d play out his fantasy.  For now, he would wait.
A cold chill filled his chambers which had nothing to do with the maid’s departure.  He pulled his jaguar pelt closer, avoiding the presence that had joined him.  He cast his gaze down, knowing that looking into the eyes of the god Tezcatlipoca would mean utter madness.  Still, his hands quivered.
“How much longer, my son,” Tezcatlipoca’s voice pierced through Malvado’s soul.
“Not much longer, my holiness. Not much longer,” he said.
Tezcatlipoca stepped closer to the web.  A sour smell permeated his whole being.
“Good.  Once we have completed the sacrifice all will be yours. Just have a little more patience.”
Malvado smiled. “Yes, my lord.  I have all the patience in the world.”

EARRINGS OF IXTUMEA is available for the  Kindle for $1.99:

Comment and I’ll send some bookmarkers!
Posted by MuseItUp Publishing at 1:00 AM

HiKim, Love the idea of the spider web. What a cool idea, interesting characters and I love the names.
Thanks for sharing the deleted scene. Malvado seems like a nasty bit of business. :)

Thanks for commenting, Rosalie! If you'd like some bookmarkers, email me at ixtumea@gmail.com and I'll send you some next week!