Hey, everyone. Cyrus Keith here, and I’m glad to meet you all. I suppose you’re wondering why I called you all here. That part is easy: I’m sharing with you an excerpt from my EPIC-Award-Winning debut novel Becoming NADIA, available right here at MuseItUp Publishing, as well as all your favorite eBook outlets.
I suppose I should have worn a red velvet smoking jacket and lit up my pipe while I affect a horrendous faux-British accent and explain the de rigeur method of construction, juxtaposed against the surreal qualities of the inner metaphor conflicted with the existential properties of the story, wrapped around a large gold brick. But then I’d probably get one of those “Honey, do you know where the kids are?” kind of looks before you went and clicked on something you could actually understand. So, no.
I’m just gonna sit here in jeans and a comfortable shirt and sip a coke while I just say I had a lot of fun writing this, and I’m geeked that MuseItUp Publishing chose to enter with me in contract on it. That, and I’d love for you all to read it and enjoy it as well.
This particular excerpt I pulled out as one of the more exciting bits. Jon and Nadia are just finding out there’s more to the whole picture of their meeting than what lies on the surface, and this is right at the beginning of their rather odd relationship. It asks a series of questions and sets up the rest of the book quite nicely (as far as I’m concerned, anyway). Also, I didn’t want to give away too much of Nadia’s secret at this point. After all, what’s the fun of a good “Oh, My God!” twist if you already know it’s coming? So, without further ado, let’s take a look at Becoming NADIA:
* * * * 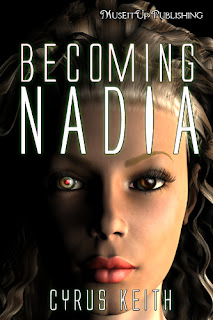 Before she knew it, Nadia was running with Jon Daniels back the way they came, futilely trying to explain why some of her best friends attacked the two of them in an airport. "Maybe they thought you were trying to kidnap me," she panted as he dragged her out of the terminal and flagged a cab.
"Okay. Maybe so. But how did they know where to find you?" Jon waved his arms at an approaching driver. The taxi swung in to the curb and he opened the door, pushing Nadia in first. He got in and slammed the door, stabbing the lock down afterward. He gave the driver a Manhattan address as the taxicab drove away.
Looking out the rear window, Nadia saw Red Hicks and Roger Glass stumble out the terminal door. They looked around desperately, and Nadia saw Red point at their cab. Then she lost sight as the car swept around the curve of the terminal drive and out toward the freeway.
"I told Steven I was still at the gate for the Iran flight, remember?"
"Granted; but why didn't your producers just call you and schedule another flight? Who was the guy with the red hair?"
"That was Red Hicks, my script man…" Nadia felt her voice catch in her throat as her mind race toward the same conclusion that she knew Jon was reaching with his next question.
"All right, then. Why would your producers send your script man all the way across the country to get you? And what was that thing the woman was holding to your head?"
"Okay, I don't know. Look, this is all happening too quickly for me right now. Could you just tell me now if you're kidnapping me so I know if I have to, like… karate you, or something?" She tried to hold her hands up in a threatening way, but somehow couldn't manage to feel dangerous enough.
He smiled sardonically at her display. "You can't sandbag me that way. Where did you learn how to fight like that?"
She pondered for a long moment. "I don't know. I never thought about it, I just…did it. I don't remember ever taking any lessons…" she faded away into silence again. She turned her face away from Jon so he would not see the tears of confusion and fear rise up in her again.
This day was just so wrong, on so many levels; she couldn't even begin to explain it to anyone. Twenty-three surgeries… "Jon?"
"Yeah?"
"Who am I?"
She felt his arm over her shoulder and found it strangely comforting. "I'm not sure," he said. "But I aim to find out."
Posted by Cyrus Keith at 5:28 PM

Wow, Cyrus = this sounds like it's a great read! Congrats!

When she finds out who she is, you'll be howling in your seats. Great excerpt, Cyrus, for a well-deserved Epic-Award!

Woo Hoo! What a ride!

Thank you, all! I'm posting an excerpt from Unalive tonight!