First kisses are not always what you expect them to be. Often exciting, sometimes awkward, and—yes, it happens to the best of us—even bad. The one thing a first kiss should always be is memorable. That's why I've decided to share the first kiss between Katora, the main character of my YA fantasy ELIXIR BOUND (available August 31st), and the lushishly long-lashed Hirsten. For more about ELIXIR BOUND visit my website www.katielcarroll.com. Enjoy! 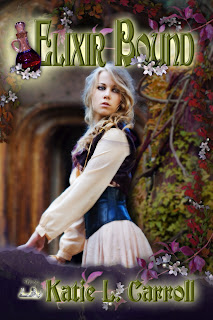 Hirsten followed Katora to the wagon. The light from the fire wasn’t bright enough for her to see well. She climbed into the back and rummaged around in the dark. The essence was harder to find than she anticipated. She heard Hirsten searching somewhere behind her and laughter from the others seemed far away. She picked up the corner of a blanket, crawled under it, and groped around. Her hand touched something warm and alive. She yelped and crawled away.
The blanket wrapped around her face. She couldn’t see anything. She struggled to drag it off and managed to tighten the tangle. Her breath came in short, ragged pants and she felt lightheaded. Then she heard more laughter, closer this time, and strong hands pulled the blanket off her. Katora filled her lungs with fresh night air. Hirsten’s face was right in front of hers. He tucked an errant piece of hair behind her ear, which didn’t help Katora breath any easier.
“You okay?” he asked.
“I’m fine. Just fine.”
Katora scooted backward until she touched the rails of the wagon. Her breath calmed when her proximity to Hirsten lessened. His back was to the light. She could see him rub his hand through his hair but not his expression as she did it.
“Sorry I laughed at you. It was just the way you were flopping around like a fish out of water.”
He turned his head enough for her to see a smile play at his lips. She scowled, which forced him to look down at his hands in a remorseful way. Katora found it impossible to be mad at him. Growing up with so many siblings, she knew one way to keep from being embarrassed was not to take herself too seriously. She wasn’t always good at it, but she forced a little bellow of a laugh to try and lighten the mood. Hirsten’s face lifted with a big grin. In a single, smooth motion, he slid next to her.
“I’m glad to be with you,” he said. “On this trip, I mean.”
She turned to face him and he leaned in closer. His dark eyes sparkled as they reflected the little firelight that reached them. She should back away, but she didn’t. He slipped his hands around her neck and Katora’s hair tingled at the roots. Their lips touched before she could react. Instead of pulling away, she closed her eyes and kissed him back.
It was an absurd thought to have while she shared her first kiss with Hirsten, but she wondered how he kept his lips soft. In comparison, hers must feel rough to him. She planted a hand on the floor of the wagon to steady herself. It knocked into several glass bottles, one of which tipped over and broke. The sound startled them both and ended the kiss. Hirsten glanced behind her.
“It looks like you’ve found the essence.”
“Hirsten. We can’t…”
“Why not?”
His face remained very close to Katora’s, which felt warm from the kiss.
“We’re on a quest,” she said. “We can’t let our guard down. We have to stay alert and professional.”
“I know,” he said as he stared at her. “Your eyes look green tonight.”
She didn’t know how he could even see her eyes. Maybe he couldn’t, which would explain why he thought they were green. Her eyes were blue. No one had ever called them green before. Why did it matter? And why did he have to keep distracting her like that? She needed to focus on the task of finding the nectar.
Hirsten whispered in her ear, his breath tickling her skin. “I’ve never known anyone, besides my father and me, who has felt the energy of the maps. Not even my brother.”
Katora’s face warmed even more. Did that mean Hirsten thought she was special? She didn’t want him to make her feel special. The praise made it hard to for her to voice ground rules about their behavior she’d rather not discuss.
“Please don’t kiss me again.”
“I’ll try not to, but I can’t promise I won’t.”
In the dark, she sensed rather than saw the intensity in his eyes. For some reason, she didn’t mind him refusing her request, and she usually hated when people disagreed with her.
Posted by Katie L. Carroll at 5:00 AM

Very nice first kiss. Love the action throughout. Not static in the least.

Katie, nice job of drawing the reader into the new emotions between the characters. Sounds like a wonderful young adult!

Oh, a comment from the mysterious Unknown. Thanks for stopping by!

Thanks, Sara! That's so sweet of you to say.

A great choice for an excerpt Katie . It won't be long till this YA Fantasy hits the shelves. This is a terrific glimpse for readers to meet Katora.

Thanks, Rosalie! You would certainly know, since you helped shape the writing into what it is today. :)

Glad you enjoyed it, Cheryl.

Exciting expedition set in a beautiful world. Katora's struggle over her decision makes this journey and the characters on it that much more believable. Can't wait for the next book!