Hallways and Handguns is a novella by Nathaniel Tower. The story is set in a high-achieving middle class school in the Midwest. From the beginning, it is clear that even the best schools aren't free of problems. In fact, Rosehill is plagued with major issues. As the story unfolds, a young girl commits suicide, a boy overdoses on drugs, a teacher is accused of inappropriate conduct, and a school shooting takes place. Through it all, the students somehow find a way to come together, even though there are so many things constantly pulling them apart.

Here are two excerpts from the book. The first shows the "relationship" between a student and teacher, and the second highlights the overdose. 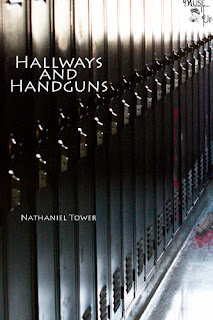 Derrick could feel Victoria’s presence just steps away—her slow movements, her body gyrating, his lower body swelling—but he had yet to rid himself of Christie. For fear of being exposed, he now kept his eyes away from Victoria, peripheral vision not included. The last thing he needed was for Christie of all people to notice he was checking out a seventeen-year-old girl. Nothing could justify an action like that. It was inappropriate and out of the question, and he was unsure why he even felt it. There was nothing stale about his wife or about their relationship, and she radiated a beauty similar to Victoria’s, although more mature. Occasionally, he did find himself thinking of Victoria as he made love to his wife, but, for the most part, he was satisfied with everything his wife had to offer. Derrick knew now, just as he knew when making love with his own wife, that it would take a great deal of strength not to look at Victoria as she pranced by, but it was for the best. Perhaps, by not looking, he could free himself of the spell she had cast on him last year when she first entered his classroom as a transfer. Although this moment always made his day exciting, his inobservance would remove the guilt he felt as she rounded the corner and headed down the stairs.
* * * *
Victoria, now even with Mr. Caldwell, looked straight ahead, tears welling, betrayal sweeping over her. This was what she had waited for all day, and Mr. Caldwell wasn’t even going to glance at her. All because of that bitch Christie. Was he ashamed? Embarrassed? Was she not pretty enough for him today? Had she misread his feelings? Was he infatuated with all his female students? Or did he just not want anyone to find out what they had together? Regardless, his behavior was inexcusable. Given the details of their relationship, this was infidelity. She was not something to be ignored. She vowed that if he did not give her some cry of recognition, more than a glance, before she made it to the end of the hall, then their secret relationship was over, and she would never again traverse these parts of the hallway.

“Dammit,” he yelled, as the powder cut through his nose hairs. The second batch stung, a phenomenon he could not explain, but a sign that his escape was at hand. With the straw now removed from his nostril, he inhaled that stale bathroom air, but this time he found nothing disgusting in its texture. The air smelled better to his nose, tasted better on his tongue, felt more refreshing in his lungs. This air, the same air as before, now had a life-giving quality to it, and he felt this new life seeping through his entire respiratory system. He stared at the last line of powder, still resting on the porcelain, almost blending in to the point of invisibility.

Mark walked away from the urinal, leaving that third line sitting alone. He examined his pale face and swelling nose in the mirror. Dammit. A trickle of blood slid out of his nostril. The stinging stopped as he placed his finger on the nostril opposite, pressed tightly, and shot a mighty breath accompanied by a string of blood out of his nose and onto the mirror. The blood stained the mirror in a snakelike pattern, distorting the view of his pallid face. He took another deep breath, inhaling the remaining blood back into his nose, leaving him with a taste of a defeated life. A sweeping numbness began to overtake his body, and Mark forgot all about the assholes that had driven him here.

Smiling a strange and distorted smile, Mark strolled back to the urinal, locating the nearly invisible powder. He raised the straw, this time placing it in the other nostril. Now almost eye level with the bacteria-infested whiteness, he took one final deep breath of finely cut cocaine, the kind that only the son of a powerful attorney at a mostly upper-middle class school could afford.

As quickly as the stinging had gone away before, a blackness overtook his eyes, and soon, just as the door creaked open, his darkly-clad body collapsed to the cold, grimy floor. 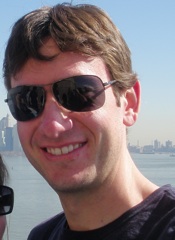 Nathaniel Tower writes fiction, teaches English, and manages the online lit magazine Bartleby Snopes. His short fiction has appeared in over 100 online and print magazines and has been nominated for the Pushcart Prize. His story "The Oaten Hands" was named one of 190 notable stories by storySouth's Million Writers Award in 2009. His first novel, A Reason To Kill, was released in July 2011 through MuseItUp Publishing. Visit him at www.bartlebysnopes.com/ntower.htm
Posted by Nathaniel Tower at 1:00 PM

Powerful excerpts, Nathaniel. Schooldays at Rosehill sounds like the place to get an all round education... of the gritty side of life.