Hello again, readers! Pleased to be here again. Cyrus Keith, at your service. Last night, I showed you an excerpt from my EPIC Award-winning novel Becoming NADIA. Tonight, I’m happy to present a smattering from the second installment in The NADIA Project and my sophomore offering, Unalive.
I love leaving my readers with a hook, and you can ask anyone who’s already read my work how much fun I have with it. When I finished the first book of the series, I thought that was it, to be honest. The bad guys were set at bay, the good guys won the day, true love won out, and— Wait a minute:
1.      We have a two-megaton living weapon of mass destruction running around loose on the planet.
2.      There are characters whose stories have yet to be told, namely those of Jenna Paine and… okay, we’ll let at least one thing be a surprise.
3.      The bad guys are still there. Sure, they took a bloody nose in the first book, but the serpent still has a head. You know, the part with the fangs? Yeah, we gotta do something about that, don’t we?
I picked this excerpt because it’s from one of my favorite parts in the book. And as a matter of fact, I enjoy reading my own work. If I didn’t like it, I sure wouldn’t be writing it, would I? Anyway, there is so much going on at this point, the general tension is so high, all it would take is one more stick, and the whole stack will go up in flames. Let’s take a look at Unalive:
* * * * 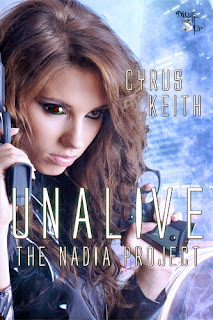 Seated at a desk against the far wall was a solitary lab technician, a petite young woman with short cinnamon-colored hair. She sat with her back to the door and seemed oblivious to the intruders in her area.
They crept forward, their steps masked by the background noise of the equipment. Jon's heart slammed against his chest like a trip hammer as he scanned the lab area, looking for any threat hidden among the rows of cylinders.
He stepped up to the first. Through a window in the top, he could see a vague shape in the darkness of the cylinder. When he bent close to the lid and peered in, a light came on inside, possibly triggered by a proximity sensor. His stomach did flip-flops as he realized what lay there.
The form was humanoid, or would be when it was complete. The skin was either transparent, or not yet formed. Sightless eyes goggled at nothing; there was no mind to understand what they saw. In shape, it could only be female, although the organs he could see told him this was no human. White blood pulsed through arteries and veins still exposed to the environment within the cylinder.
He'd seen enough. Here was all the evidence he needed to bust the organization of the Pinnacle wide open, and here was someone who could lead him up the ladder. He strode to the other end of the lab. The technician was so engrossed in what she was doing, she never turned.
He came right up to her and touched her on the shoulder, intending to turn her around and put her on the floor so she could be trussed up. But he no sooner had a hand on her shoulder when something grabbed his arm and gave a twist. Jon's world went crazy as he flew through the air, bounced off a wall, and landed on his stomach. A knee pressed hard into the back of his neck, pinning him to the floor. He heard the snick of a safety catch right behind his ear as a familiar voice shouted at Sharon. "Drop the gun, sister! Drop it or his brains are all over the floor!"
Posted by Cyrus Keith at 5:30 PM

Thanks, Rosalie. I personally think this one is even better.