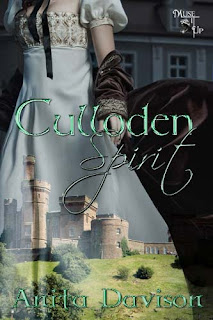 CULLODEN SPIRIT BY ANITA DAVISON
VICTORIAN HISTORICAL ROMANCE
BOOK DETAILS
I chose this excerpt as it's the first meeting between the hero and heroine, whose relationship gets off to a sticky start - literally -  and gets worse before it gets better.

Ahh.. what a great meeting. Carrie is not a happy camper. What a great moment you have captured and shared. I can almost smell the fruity aroma and feel the sticky mess.

You had me in the moment. Great cover.

Great meeting! I loved the chemistry between these two.