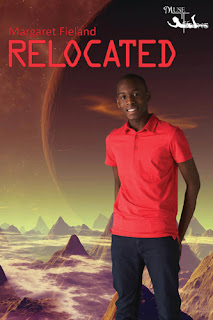 Back cover:
When fourteen-year-old Keth's dad is transferred to planet Aleyne, he doesn't know what to expect. Certainly not to discover Dad grew up here, and studied with Ardaval, a noted Aleyni scholar. On Aleyne, Keth’s psi ability develops. However, psi is illegal in the Terran Federation.
After a dangerous encounter with two Terran teenagers conflict erupts between Keth and his father. Keth seeks sanctuary with Ardaval. Studying with the Aleyne scholar Keth learns the truth about his own heritage. After Keth's friend's father, Mazos, is kidnapped, Keth ignores the risks and attempts to free him. Little does he realize who will pay the cost as he becomes involved with terrorists.

When I went to choose these excerpts, I wanted to choose ones that did not give away details of the plot, as one of the key aspects of the story is the series of discoveries that Keth, my main character, makes. Yet I needed them to be interesting.

Excerpt 1: The beginning of the novel.

“What do you mean I must undergo a psi exam? The Terran Federation legislates against any use of psi." The speaker, a human woman with wild gray hair, glared at the immigration official.
I gazed at the official. Like most Aleyni, he stood over six feet, slender, with extra wide hands, and thumbs able to bend all the way back. His head appeared more oval than humans, too, and he showed almost no external ears. His skin appeared almost black, like Dad’s and mine, and hers appeared pale. His dark skin provided a welcome spot of color against the general gray of the space port interior. The temperature felt pleasant enough, though; nicely warm instead of the chill of the Terran Federation space station circling above Aleyne.
He could have been reading a laundry list. “Madam, Aleyne is a sovereign planet, not part of the Terran Federation, and if you want to clear immigration you must undergo a psi exam.” He pushed a data cube toward her. “Either sign the consent form and undergo the exam, or go back up to the space station.” He added, “Take it or leave it,” in Aleyni. No one else noticed.
She threw the data cube on the floor, stomped, and it shattered into fragments. “I won’t do it. I don’t want any aliens screwing around in my head.”
The official stared at her for a moment. “It’s against our ethics to screw around.”
The woman crossed her arms. “I don’t believe you.”
“You can return to the space station and take the next ship out.” The official’s face revealed nothing, and his gray eyes stared straight at her. His hands hung loose at his side. I considered him a model of polite behavior, considering. I would have punched her.
The woman stared at him. Her head tilted up, because she barely made five feet. Her face, which wore a ferocious frown, turned bright red. Maybe she disliked dark skin, or maybe she simply hated Aleynis.
“I’m going.” She spat the words, turned, glared at us, and marched down the corridor. I glanced back and noticed her arguing with a Space Force officer. The expression on his face would have curdled milk.
Dad prodded me. “Keth, come on.” He grabbed two data cubes, scanned them, and signed both. The official passed both of them through his reader and put one through a slot. “How old is the boy?”
“I’m fourteen Terran standard years. That makes me sixteen in Aleyni years. The Aleyni year is shorter than ours.”
“You need to consent for yourself.” He passed me a new cube and I signed.
The official threw it away and handed me another. “Read first and then sign.”
I sighed loudly and read the whole thing, both the top half, in Aleyni, and the bottom, in English Common Speech. I started to compare the two, noticing how much clearer informed consent appeared in the Aleyni version, when Dad prodded me. I signed the form and returned the cube to the official. “Okay, I read it.”
The official smiled and pushed it through the slot after Dad’s.
I wasn’t scared, since Dad told me about the need to take a psi exam. The Aleyni checked for any kind of plant or animal, or whether we planned a terrorist attack. Dad said Federation anti-psi fanatics attacked a couple of times recently, so I understood why they checked carefully.
The examiner set me in a chair. He asked me again if I consented to the exam. When I said yes, the examiner put his hands on the sides of my face, looking into my eyes.
His hands burned hot against my skin. A thousand ants chewed through my brain and a voice whispered questions I couldn’t quite make out. I tried to take a breath, but my throat tightened, and I gasped aloud. I squeezed my eyes shut and tried to stop shaking. I shook my head, trying to make the voices go away, and the examiner removed his hands and stared into my eyes for a moment. The buzzing voices stopped, leaving my head feeling as though it would burst open. The examiner smiled at me and passed me through the checkpoint. A couple of minutes went by before my stomach stopped heaving, but hammers still pounded inside my head

We trooped back into the house to the courtyard, where I found Noki and Orodi  laying out second meal on a rectangular table with benches on either side. Orodi smiled at me. I blushed and smiled back, and we sat down. I ended up opposite Orodi, which caused the others to grin and nod their heads.
Shaffa nudged me, passing me a loaded plate and a glass with cold tea. The plate held a vegetable stew and wheat-like grain. I took a few bites and put down my spoon.
I gazed across the table at Orodi. My heart thumped. I needed to say something. Orodi looked pretty and sweet. “Mazos says I can come tomorrow afternoon to start learning glass blowing. In the meantime, would you like to go for a walk this afternoon?”
Orodi smiled, and her eyes crinkled at the corners. “There’s a park around the fountain in the center of the city.”
Shaffa swallowed his bite of stew. “It’s lovely, lots of flowers and trees, and hidden grottoes simply perfect for two.” He slapped me on the back. “You’ll love it.”
I frowned as Shaffa. “Isn't three or four more usual?” Embarrassment filled me, but I asked anyway.
Shaffa grinned at me. “Two is a good start.”
Shaffa loaned me his bicycle, a sort of mauvish pink like his sister’s. Orodi jumped on hers and started down the street, with me wobbling after her.
Don’t believe what they tell you when they say you never forget how to ride a bicycle. I hadn’t been on a bike in years -- Washington, D.C, had too much traffic and no bicycle paths -- and it showed. Fortunately, the other cyclists gave me a wide berth, and I steadied by the time we reached the park
“I’m sorry I’m such a poor rider,” I lamented as we pulled up to the park, ashamed of my poor biking skills, and wondering what Orodi thought of me now.
“You’ll improve,” Orodi smiled at me, and I realized she didn’t mind.
We parked our bikes in the rack in front of the park entrance. Orodi took my hand and pulled me along one of the paths into the park. “Come on, we have to visit the fountain first, and you need to take a drink. Afterward we can go explore a little.”
As Shaffa said, they made a park from the oasis, with a red ground cover, short and thick, and beds of flowers. Several paths led into the park, winding out of sight behind purple rocks. The umbrella trees provided welcome shade.
I stared at our clasped hands, enjoying her soft skin against mine. Orodi’s hand appeared broader than mine, but my fingers were longer. When I glanced up, she smiled at me.
“You’re going to kiss me. I know the perfect spot.”
My mouth dropped open and my face flushed. Orodi laughed, and I observed the mischievous glint in her eye. Excitement bubbled up my throat, but nothing came out of my mouth. We walked along in silence until we reached the fountain.
The fountain had a large basin made of shiny purple stone. Water spouted from a hole in the center, reaching a height of eight feet before splashing back down. Scattered along the rim, men and women dipped their hands in the water and drank. I trembled as I gazed into Orodi’s eyes, wondering what would happen next.
Orodi pushed me up to the edge. “You first.”
I leaned over, scooped the water, and slurped out of my hand. The cool, sweet water trickled down my throat.
Orodi leaned over, drank, smiled at me, and led me down one of the many paths winding away from the fountain. We ended up in a secluded grotto with a bench carved into the purple rock and we both sat down.
“My water tasted sweet. Did yours?”
I nodded. “The sweetest water I ever tasted.”
“It’s supposed to tell you if the other person likes you or not.” She smiled. “Mine tasted sweet, too.”
I wanted to kiss her badly, but I didn't know what to do. I’d never kissed a girl before, and I didn’t want to do anything wrong. Orodi leaned over and kissed me. I put my arms around her and kissed her back. Her lips felt soft and warm. I opened my mouth in surprise and her tongue darted in. Our tongues touched, and my whole body tingled. By the time we stopped I could barely breathe. When I looked around, the whole landscape sparkled, and the colors appeared brighter and clearer than ever before.
Orodi tugged on my hand, pulling me to my feet. “Come on, let’s go somewhere more private.” I glanced around, afraid I would find everyone staring at us, but they were too busy kissing each other to mind us. Orodi led me around the fountain and down another path to a bench cut into large rocks. The rocks, purple and ten feet tall, formed a curved wall. The perfect private spot for two. I put my arms around Orodi and we kissed again. We sat and held hands. I don’t remember what we talked about.
We walked back out of the park, retrieved our bikes, and started back to her house. I grinned the whole way back.
“It’s a good thing you kissed me, or we might still have been sitting there when the sun went down,” I said as we put the bikes away.
I noticed the mischievous glint in her eye again. “I know.”
Posted by MuseItUp Publishing at 8:00 PM

Good choices Margaret! Nice tempting glimpses without revealing too much of the plot. :)