Back when the economy tanked it took with it many small publishing houses. Swimming Kangaroo was one of them. Though Dindy has kept all the titles previously published available in both eBook and trade paperback, she no longer takes any more submittals and even closed down the SK website. So the second book, Resonances, had to look for a new home.

Up to that time, I had never written so much as a summary, much less a synopsis. So it took me a while to get all that down. With much instruction and advice from Lea and the MuseItUp groups I submitted to a couple of places but they didn’t pan out. So there I was with book II in my hand when Lea decided to open her own publishing house. I was so excited when she accepted the manuscript. I think I had already Facebooked, Tweeted, and sent out a wave of email before I even had coffee or signed the contract that morning. 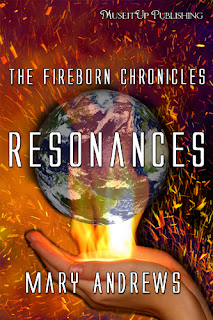 Excerpt of Book Three coming up shortly
Posted by MuseItUp Publishing at 7:00 AM

Mary, another great excerpt. Resonances is where I joined the Fireborn. You introduce a couple of cool characters here, who do amazing things. I can safely say this is before things get really interesting. hehe.