When I was in high school I remember reading an epic  poem by Carl Sandberg. It was called THE PEOPLE, YES. Near the end of it was a phrase that really struck me. I actually wrote the words down. They are:

This old anvil has seen many broken hammers...
Time is a great teacher...
The fireborn are at home in flame...
Who can live without hope...

This is where my title came from. All of my characters are at home in flame. They come from bad places to live and die in service of the greater good. 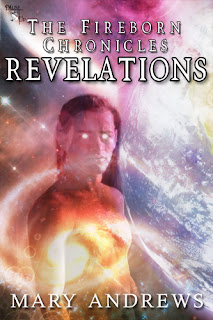 Alandra’s tired eyes focused on the Oracle Triad as they turned in unison to face her. “What’s so important that I have to come to you in the middle of the night?”  She shuffled her bare feet on the cold floor and tugged her robe closed for modesty’s sake.  “Well?”
The three scrawny old men stared at her with an air of expectancy.
Alandra sighed and opened her mind to them. “Show me.”
A universe of stars flashed into existence and coalesced into a familiar configuration; eight planets and a single sun—the old Sol system of long ago, before Earth’s demise.
In unison, the Triad spoke with sonorous voices transcendent of time. “You know this solar system?”
Alandra nodded and watched the image in her head shift and draw her beyond its outermost perimeters.
“You must act now.”
A gargantuan rock, cold and desolate, tumbled lazily toward the system. Alandra brushed strands of hair from her face. “What is that?” She focused harder to better study the mental image. “An asteroid—a comet?”
“It has begun.” Still in unison, their tone lowered ominously. “A body from without threatens our dimension’s Earth just as it did yours centuries ago.”
Alandra measured its path in horror. “Oh no, not again.”  She slammed her mind shut to stop the accelerating image. With a flash another appeared. Buffeted by turbulent winds, encircled by explosive sparks of gold and yellow and white, her brother, Ira, stood alone in the night upon a snowcapped mountain. He stared at her through the maelstrom, his long untethered black hair alive and lashing in the wind. A bolt of lightning ripped across the sky between them. His crystalline eyes flickered, aglow against the sudden mad darkness that followed. His soft voice echoed with a sense of urgency across her mind, “Now!”
Alandra gasped, finding herself once more in the room with the three aged Oracles.  She spun to leave. “I’ll tell the Overlord.”  Racing from the room in blind terror, she barely managed to slide to a halt before a Hive communication access panel. Slamming her palm against it, she struggled to catch her breath.
“State your business,” a bored voice demanded.
“The Overlord,” Alandra gasped. “I must reach the Overlord.”

I think most people believed that the end of the Oracle prophesies arc would be the end of the series. Naw. I have a universe to play in now. Why would I leave it? Stay tuned, this is a Schwarzenegger moment—“I’ll be back.”

THE FIREBORN CHRONICLES: REVELATIONS
RELEASES JULY 27
GET 20% OFF IF PREORDERED AT PUBLISHER SITE: http://museituppublishing.com/bookstore2/index.php?page=shop.product_details&flypage=flypage.tpl&product_id=536&category_id=231&option=com_virtuemart&Itemid=1&vmcchk=1&Itemid=1

FOR MORE INFO, BUY SITES AND EXCERPTS GO TO
http://FirebornChronicles.com

Posted by MuseItUp Publishing at 7:30 AM

Great excerpt really sets the tension at FULL ON!
A whole universe to play with... what a lovely concept. :)