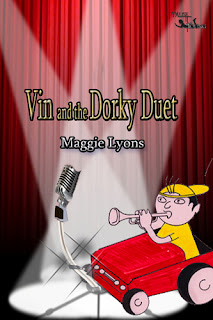 Back Cover:
Vin and the Dorky Duet

When he walks through the door and sees the sharky grin on his sister’s face, Vin rightly suspects Meg is hatching a plot. Worse still, he’s central to the outcome. Meg tells him everyone expects him to play her duet for trumpet and piano at the student concert. Vin is horrified. His only escape is to persuade another trumpet player to take his place. Meg has the hunky Brad Stewart in mind, and she challenges Vin to introduce her to him. To do that he must first befriend Brad’s nerdy brother, Eyeballs, the last person Vin wants to be friends with until Meg’s promise of a David Beckham autographed soccer jersey changes the seventh-grader’s mind. He has five days to accomplish his mission—Operation BS.Vin’s game plan, thwarted by exploding fish tanks, magnetic compost heaps, man-eating bubble baths, and other disasters ultimately succeeds, but not exactly as he expects …

During break I went to the library, a favorite nerd hangout I avoided as much as possible. I walked slowly around the stacks, pretending to look for a book until I spotted Eyeballs sitting by himself in a corner. You couldn’t miss him. His feet stuck out from the desk and his red and purple plaid socks glowed so much they made my eyes bug out. As he read a book, two inches away from his nose, he made notes with one hand and held down the pages with his other hand because a ceiling fan was flipping them. That gave me my brilliant idea.
“I’ve got the perfect paper weight.” I sat next to him and fished Uncle Jack’s key chain out of my pocket. I slapped it on Eyeballs's book. The grey whales bobbed crazily around in their mini-ocean.
“Eeuw! What’s that?” Eyeballs squinted at the page through the glass bricks on his nose.
I wanted to say, "A key chain, you moron," but that wouldn’t have been a good idea, especially because Eyeballs wasn’t looking at the key chain. He was staring at a gob of green goo that inched across the page. The ball had cracked, spilling the whales’ ocean. Eyeballs picked up the key chain with a paper napkin, dropped it on the floor, and dabbed at the page with another clean napkin. Who else but Eyeballs would have had paper napkins in his pocket?
“You’ve stained my library book.”
It surprised me that a nerdy person like Eyeballs could say anything so obvious. He looked at me as if I’d totally destroyed a sacred object, blown up a statue of Einstein or something.
“You could try using bleach. My mom swears by it.” I knew as soon as I’d spoken I shouldn’t have said that.
“First, perhaps you haven’t noticed, but I don’t have any bleach.” Eyeballs’s voice hit me colder than the gym shower. “Second, you can’t use it on paper. When I get home, I can try to get it out with French chalk and an iron.”
“I’m sorry, Eye … er … Binkley. You can keep the key chain.” The heat in my face reached melt-down, dangerous enough to clear the entire library, which I sprinted out of, leaving Eyeballs staring at the beached whales.

Dewi and the Seeds of Doom

Peering from side to side and looking over his shoulder every now and then, Dewi trotted on tiptoes down a corn row to the back of the greenhouse, where he found two boxes of corn kernels. One box was labeled “Cornus normalus picked today” and the other was labeled “Cornus ghastly messus picked today.” Dewi scooped up a few kernels from each box and put them in his knapsack. He was halfway back to the door when he heard footsteps coming toward the greenhouse. One foot dragged along the ground and the other clunked in a weird tango: sch—schlep—schlep—clunk, sch—schlep—schlep—clunk. Dewi crouched behind the corn. A lopsided shape lurched through the doorway. It belonged to a hunchbacked dwarf who was talking to himself.
“Peegor, fetch that test tube. Peegor, did you throw that dead rat out? Peegor, did you fan the corn? I swear that old fart will be the death of me. I’ve a good mind to quit right now. I don’t care if his royal pain-in-the-neckness threatens to stuff me full of rat tails. I wish you’d rot, Baron Snot. Ha-de-ha-ha!” The dwarf raised a leg as if he were about to kick someone in the rear end, or worse. Then he wobbled and fell over.
After muttering a few fantastically rude words, he picked himself up, limped to a faucet, and filled a watering can. He began to water the first row of corn, hobbling down one side and up the next. Still crouching behind the second row of corn, Dewi breathed in to make himself thinner. The dwarf was getting closer. Dewi held his breath. This wasn’t easy, because a bee had landed on his nose. He crossed his claws and tried not to sneeze.
The dwarf was only seconds away when the bee flew off the dragon’s nose. As he followed the bee out of the corner of his eye, Dewi noticed a plant pot right behind his tail. Quiet as a snowflake, he picked up the pot and threw it as far from the greenhouse door as he could. It smashed through a pane of glass at the end of the building. The dwarf dropped his watering can and schlep-clunked at top speed down the corn row toward the broken glass. He was so close when he rushed by that Dewi could smell three-day-old blood pudding and onions on his breath.
Posted by MuseItUp Publishing at 1:00 PM

Hi Maggie,
Great excerpts.. you have to hate it when the whale's ocean escapes just when you want to impress Blinky. I feel for your main character.
Hunchback dwarves, exploding fish tanks, magnetic compost heaps, man-eating bubble baths.. a perfect combination. LOL.
These are wonderful examples to entice readers!