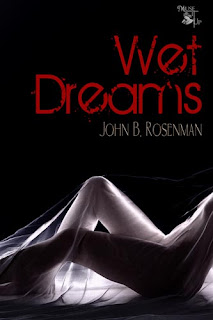 So often, we like to think we are rational, loving creatures when unknown even to ourselves, we are just the opposite: mad, cruel, selfish, and lustful.  We pray to God and secretly worship the powers of darkness.  In my story, “Wet Dreams,” a couple rents a mansion in the country for the summer to mend their troubled marriage.  Will they succeed?  It all depends what happens after they make love and close their eyes.  Yes, in dreams lie salvation, but it’s also true, as Goya wrote, that “The sleep of reason produces monsters.”

An hour later, he lay back naked and basked in the afterglow. Karen herself turned off the lights and snuggled happily against him, both their bodies covered by a single sheet. Like him, she was exhausted and drenched with sweat. He listened to her breathing slow and descend toward sleep.
Mirrors. We're surrounded by mirrors here.
Eyes closed, he thought of their coupling, entangled bodies, which they had seen reflected from many positions: he above her, then behind, Karen above, and then receiving him sideways. He started to smile but found himself imagining their own images watching them in the shadows like second selves. Who knows, perhaps their alter egos would wait till they slept and then creep into their bodies and possess their souls. And, in the morning, when they awoke...
Where had he gotten such a weird idea? He tried to puzzle it out, but sleep soon stole upon him.
Sometime later he awoke, smelling perfume. Something exotic—jasmine? Whatever it was, it must be his imagination because Karen wasn't wearing any. But it was so sweet and fragrant, so...
He had an erection.
He grunted in surprise and pulled down the sheet, feeling himself. Yes, he was hard, fiercely rampant. His penis jutted boldly out, throbbing with lust.
Turning to Karen, he pulled the sheet off her. Through a window, moonlight speared her naked form.
“Karen.”
No answer, so he lowered his lips and kissed her breasts, then nibbled and caressed a nipple. She moaned. His lips descended along her stomach, and his tongue soon explored her musky depths. Gently, her hips began to rock against his mouth.
Pulling back, he knelt between her white thighs…hesitating. What was he doing? She wasn't even awake. But he could smell her arousal, as well as that strange, sweet perfume. Lowering himself, he entered her, feeling her legs rise and lock about his waist. No, there was nothing wrong with this. Even in her sleep, she wanted him!
He began to move, his blood singing with lust. She was so wet, so warm and slippery. It felt so damned good, that he drove himself feverishly into her and bit her earlobe, drawing drops of thick, hot blood.
As he did, she seized his back and tipped him over, moving so that she was on top. He started to laugh, to chide her for her deception, but in the moonlight, he saw it was not Karen above him. Karen was blonde and slender, not this dark, voluptuous woman with huge breasts and erect nipples who laughed in passion and ran her hands through the long lush waterfall of her black hair. He watched her arch her neck toward the ceiling, her throat trembling. And all about them, suddenly, their images sprang forth despite the darkness, gleaming with sweat in the bright mirrors. As they all moved, the waterbed rocked and flowed like the sea, blood-warm and eternal.
“Oh, Rex!” She moaned. “Hurt me a little.”
“What?”
She looked down at him, her dark eyes glittering, her face beautiful and bewitching. “I said ‘Hurt me,’ dammit!”
He started to say he wasn't Rex and didn't even know her, but then he found he did, that he had known her for a long time. “Beg me to hurt you, Laura,” he ordered. “Beg me to do whatever the hell I like.”
“Oh, yesss!” Something appeared in her hands, a rope which she looped about his throat and started to pull tight.
“Oh, no, you don't!” he gasped. Rolling, he spilled her off and struggled till he was on top again. Yet she still gripped his throat with the rope, pulling the ends so tightly he could barely breathe.
“When you cum, darling,” she laughed, “you'll also go. It'll be like computing the value of pi, which is to say, the best and longest orgasm of your rotten life! Too bad it will also be your last!”
“Sorry,” he snarled, “but I'm the one who punishes. And Laura, I'm afraid you've been a very naughty little girl!”
He raised his hand, determined to hit her face and breasts. He knew just how to strike so as to cause a maximum of pain with a minimum of marks. Slap! How the bitch's face would contort. Slap! Smash those sweet, firm tits! Try to strangle him, would she? He started to swing, stopping as his inward view shifted. What was he doing? This wasn't Laura; this was his wife Karen. And he was...
Confused, he wavered back and forth, half of him wanting to destroy, the other half struggling to save. Karen. Laura. Love. Hate. Protect. Hurt. And his soul, balanced like smoke on a razor's edge.
Posted by MuseItUp Publishing at 1:30 PM