Those Pesky Adults by Andrea Pelleschi

You’re writing a brilliant story for children or teens. You’ve come up with a fantastic plot full of peril and emotional angst. You’re characters are engaging and three-dimensional. Your voice is spot-on for that age group. Yet one thing keeps getting in the way.

These pesky adults actually live in the same world as your young characters. They might be parents, teachers, storekeepers, security guards, or dangerous criminals. How do you handle them?

The first thing to remember is that the main character in your story must solve his or her own problem. This is crucial, not just for middle grade and young adult stories, but to for all stories. It can be very tempting to let an adult step in and save the day. In real life, this is often what happens, but your story isn’t real life. It’s fiction, and while it mirrors real life in many ways, it’s not a documentary. As the writer, you’re taking your protagonist on an emotional journey, and for the journey to be complete, your character must defeat the bully, find her missing parents, or get the part in the school play without adult intervention.

Can an adult help them along the way? Absolutely. In the award-winning novel Speak, the art teacher becomes a mentor to freshman Melinda as she deals with a rape she experienced over summer break. She doesn’t talk to the teacher about the rape, so he has no chance to intervene, but he encourages her interest in art and helps her find an outlet for what she’s been through. In the end, she finds the courage to speak about her rape all by herself. Yes, an adult helped her get to that point, but she’s the one who had to actually do it.

The Harry Potter novels are filled with adult characters. From Dumbledore to Voldemort, they are a large part of Harry’s life, both hindering and helping Harry on his journey. Is it realistic for Harry to have to fight Voldemort at the end of the series? Perhaps not. But J.K. Rowling set up Harry’s world so that Harry, and only Harry—who was a young boy at the start of the series—can defeat Voldemort. Sure, there were much more experienced and perhaps more powerful wizards in Hogwarts who might’ve done a better job, but then it wouldn’t be Harry’s story any longer.

That is the challenge for writers. To include adult characters, but set up the world and the situation so that only the young main character can solve the big story problem.

Okay, you’re thinking, teachers and wizards and evil villains are one thing, but what about parents? It’s a lot harder for young characters to avoid their parents’ watchful eye, or worse yet, their tendency to step in and fix everything.

One way of handling parents is so common that it’s almost become cliché. Kill them off. In Ella Enchanted, Ella’s mother dies in the beginning of the novel. In the Harry Potter novels, Harry’s parents are already dead. In Crispin: the Cross of Lead, the story begins at the funeral for Crispin’s mother.

Another way of getting rid of parents is to ship the main character off somewhere else or set them off on a quest. In the Princess Academy, Miri goes to princess school. In A Single Shard, Tree-Ear sets off to deliver his mentor’s pottery to the emperor. In A Wrinkle in Time, Meg teams up with her brother and some mysterious neighbors to find their missing father.

In my novel, The Carousel Ghost, I didn’t kill off 14-year-old Kate’s parents. I just didn’t place them in the story in any meaningful way. They were there as background noise. When Kate was at home, she was in her room or alone in the kitchen. When she wanted to investigate the mystery that is consuming her, she does so without their knowledge. She either says she’s with a friend, which is true, or doesn’t mention what she’s doing. Because they’re not important to the plot or to Kate’s emotional journey, they’re just not part of the story. (I also made sure to make them fairly lenient parents who trust Kate to be off on her own.)

But let’s say you want to keep parents in the story. Go for it. Make them as meddlesome as you’d like. In fact, you can even make their interfering nature part of your main character’s journey. Maybe a teenage boy has to tell his father to quit fixing his problems for him. Or maybe Miranda’s mother is so worried that Miranda won’t be successful that she tries to help too much, which causes a lot of tension between Miranda and her mother. Then Miranda’s journey is to deal with her worrisome mother.

Whichever way you choose to treat adults in your story, just remember to always keep your main characters in the forefront, struggling to solve their own problems and completing their own journeys.

Andrea Pelleschi has been editing and writing children’s books for over 12 years. As an editor, she's worked on everything from coloring and novelty books to picture books and textbooks. As a freelance writer, she’s written primarily nonfiction, but her passion is scifi, fantasy, and paranormal. She has an MFA in creative writing, and The Carousel Ghost is her first novel with MuseItUp Publishing. Currently Andrea lives in Ohio with her cat Ella, who, unlike her namesake Cinderella, never does any housework. 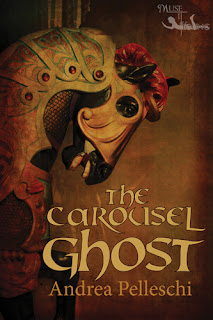 I'm in total agreement with keeping the main character in the spotlight. It would be too easy--and cheesy--to use the parents as a kind of deus ex machina for all problems.

I'm working on a middle grade project right now. While I didn't kill the parents off, I decided to make them a major hindrance. They have good intentions--the mother more so than the father--but I'm using them as an obstacle for the main character to overcome.

It's tricky to deal with adults in stories for young people. Making them an obstacle is a good idea and something I'm sure a lot of kids have to deal with!

Thanks for your blog, Andrea. I see that I am not the only one who has expereienced difficultly in knowing how to deal with adults in YA stories.

I am playing around with a story in which the parents are the motivation behind some of the choices the protagonist makes. These choices cause him some problems that he must ultimately solve.