A common complaint of writers is (accurately) that it's impossible to summarize an entire novel in a 250 word query. Which is the absolute truth: any novel that could be summarized in 250 words wouldn't be a novel worth reading. But this member was upset at how many unique and intriguing aspects of the novel's worldbuilding were going to get glossed or omitted. No doubt when writing your own query you got frustrated by the limits of the form, the character shading that got stripped down to stereotypes, the careful setup that got reduced to a trope.

Take a deep breath and play a game of pretend: your next door neighbor called you, frantic, begging you to take her to the emergency room. You grabbed a copy of your novel off the shelf, where it was magically just sitting there bound and printed and with a cover, and drove her there. When you got there, you realized you didn't have your wallet, and the ER staff told you it would be five hours. You're hungry. There are vending machines, but you don't have any money.

You start re-reading your book and loving it. While you're doing that, I come sit down in the waiting area. Finally I say, "Are you reading a book?"

Instead of telling me, "No, I'm sewing buttons on pickles," you humor me and say, "Yes."

That's when you have a wicked idea: if you can SELL me your book, you'll have money for the vending machines and you won't be so hungry. You have a stack more books at home, so it's not a big deal to sell me this copy. The only thing you'll need to do is convince me to buy it.

But what you're not going to do is something like this: "Middle Earth is the home to five major races, each of which explores a different iteration of the human spirit."  And you're not going to say, "The underlying theme of my novel is death, but it's explored slantwise by showing the nuanced ways in which individuals respond to the lure of power."

This stuff may be vital to the story (and in fact, it is vital to the novel I'm talking about) but it's not vital to the pitch. The pitch needs to be a separate entity. Because queries are not synopses or Cliffs Notes. They're sales letters.

With that in mind, I think you would say, "It's about an ordinary guy who just wants to live his life, but instead he's forced to protect, and ultimately destroy, the one artifact an evil wizard wants most in the world."

I'd probably sit up and and say, "How'd that happen?"

You'd say, "Well, he had no idea what this ring was when he accepted it, but it was forged three thousand years ago by the Dark Lord in order to enslave the different races that live in Middle Earth, only now this guy Frodo has it. It will give him a really long life, but it's going to turn him into a horrible person if he tries to use it. And the only way to destroy The One Ring is to carry it right into the kingdom where that Dark Lord is. And he knows Frodo is coming."

It's not about giving an accurate portrait of the story. It's about teasing us and making us just as hungry as you are. You don't really care about conveying the nuances of Frodo's relationship with Sam as much as you care about making me shell over five bucks so you can get a sandwich.

Make yourself feel better: look on your bookshelf at your favorite books. Re-read their back cover copy. Think about how much it leaves out. But those few paragraphs still interested you enough to get you reading, right? Even if they didn't convey the subtleties of the character's growth?

It's okay. Take a deep breath. Sell your book.

Jane Lebak's first novel The Guardian will be re-released this September by MuseItUp Publishing! She is also the author of Seven Archangels: Annihilation (Double-Edged Publishing, 2008) and The Boys Upstairs (MuseItUp, 2010). At Seven Angels, Four Kids, One Family, she blogs about what happens when a distracted daydreamer and a gamer geek attempt to raise four children. 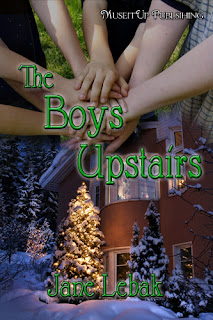 Posted by MuseItUp Publishing at 8:09 AM

I am saving this one. That is the most perfect query pitch analogy I've ever heard. Thank you.

I secondly that motion. This is excellent. The best analogy I've seen ever. Makes me wanna buy the book too! Kudos!

Thank you so much for the advice. Queries are so rough and help is always appreciated.