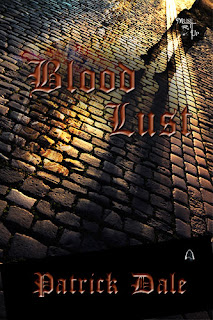 
A seemingly isolated murder triggers the unravelling of a seam of corruption leading to the highest levels of police hierarchy.

When a prominent family is struck by a senseless murder, Quinn is drawn back into undercover duty to ferret out the killer. Thinking it to be a fairly simple case of homicide, he soon learns that things are not what they seem as more people die and apparent answers become nagging questions. A crime boss is drawn into the melee and violence escalates. Mistrust grows between Dan, his captain, and the police commissioner when a seam of corruption is revealed. Quinn’s quest leads him to an amazing discovery far from the city before he can solve the ultimate mystery of Blood Lust.


Excerpt:
He was on his way to the Ferrari when Angel hailed him down. “Quinn? Before you go, I need to talk to you.”
“Again? I thought we’d had our conversation, Captain.”
“We need one more—one I think you’ll be interested in. Fred Cowell has an idea we want to get your take on.”
Fred Cowell, Metropolitan Police Commissioner, didn’t run anything by cops other than division chiefs such as Captain Angelina Louise Caldrone. What could he possibly want from the likes of a former homicide detective—especially one who couldn’t follow the rules?
“My take? Come on, Angel. At least shoot straight with me. What the hell could he want with me?”
She gave him a silly grin. “I’m going to let him tell you himself. He’s waiting upstairs in my office.”
Dan hit the elevator button. “Well, hell. Let’s not keep the good man waiting.”
He trailed Angel into her office, torn between smoldering lingering lust he’d felt for his former lover and a healthy distrust of anyone who maintained an official position in police circles. Cowell sat in Angel’s seat, smiling at him.
Uh-oh. This can’t be good.
“Good morning, Detective Quinn. I understand you have good news regarding Doctor Moreland.”
Quinn did his best to return the smile. “Yes sir. Sera’s opened her eyes and indicated she can see and hear me.”
“That is very good news. I hope you know my prayers are with her every day. All our prayers.” After nodding at Angel, he said, “That affair was a gruesome thing to endure, and she’s a wonderful person.”
Affair?
Quinn answered, “Yes, it was pretty bad, but she’s on her way back to us. Now, Angel said you wanted to run something by me?”
“I did. We did. Quinn, I won’t waste time mincing words. You’re the best at what you did, even considering the pain in the butt you were at times. We need you in the department, but I understand you feel your career is over. I’ve got an idea for a way you can live the life you want and be an even more effective homicide detective at the same time.”
Quinn couldn’t help the sarcastic laugh he gave Cowell. “With all due respect, Commissioner, how the hell would I do that?”
“An ‘Army of One,’ I think the recruiters call it. I want to give you a chance to be a division of one—undercover, no chain of command other than reporting when you need to, directly to me by way of Captain Caldrone.
“And no specific assignments. A stealth agent, as it were. No publicity, no waiting for approval from your supervisors, just good, quiet detective work that brings in bad guys who work the community harm. And this does not go through Jeff City.”
“Wow. That’s a mouthful and a half.” Avoiding the one-and-a-half-century bone of contention between state and city meant true anonymity if he did it.
Remembering his original meeting with Sera and the task she’d put before him back then, he mentally sifted through all the things that could go wrong. There were some rough spots, mostly concerned with how he’d interact with the regular force in gaining data he’d need to do this. “Worth considering.”
Angel’s face lit up. “Really?”
He laughed. “Sure. You folks don’t know it, but this is close to what Sera offered when she was setting up Biscayne’s foundation. It worked, though not well enough to keep her from suffering and those other little girls from dying. How soon do I need to say yes, if I decide to do it?”
“Soon.” Cowell’s face shrank into his customary scowl. “We have a case right now that will not go well if we have to resort to our traditional system.”
Dan took a stab at it. “The dead gay you’re holding Marlin for?”
Cowell nodded.
“I thought you had an airtight case against Fish.”
The commissioner scowled. “On the surface, we do. But we’re not buying that this creep could have done it. So, what do you say?”
This offered a chance to help his snitch out. Better yet, a chance to do real police work free of the cumbersome trappings of officialdom. “Yes.”
“Yes?”
“Yes, I’ll do it. I have a few conditions that go with it, but you can count on me giving it my best.”
“Conditions such as?”
Dan grinned. “All in good time, Commissioner. I’ll not hold you up for anything you’d take offense at. I assume my pay will be the same as when I left the force.”
Angel interjected, “No, you’ll be given a raise. And a title. On paper, you’ll be the equivalent of a lieutenant, though nobody will know that other than the three of us and a faceless office accountant who’ll handle your pay.”
“Sounds like you’ve thought it all out. Well, then, I’d best get started. Oh, yeah, I will share this with Sera.” He couldn’t help the wicked grin he added to his final words. “But I have it on good authority that she’ll not tell anybody about it.”
Quinn walked out into the bright sunshine of an unusually brisk fall day, his feet tripping along as he sniffed the clean, crisp breeze. Even it, with low humidity and positive evidence that St. Louis’s air quality had become cleaner than ever, served to make this a day to remember.
He’d gotten his love back. Well, not quite back, but she was on the way. Now he’d gotten his job back, only it, also, was better than ever. He had a case to solve, and life was good.
Of course, that was before he discovered the parking ticket he’d gotten while parked in the commissioner’s reserved spot. Rather than grumbling, Quinn laughed out loud, realizing he’d found a way to fix even that little irritation.
Ah yes. Life is good!
Posted by MuseItUp Publishing at 7:01 AM