I don’t do scary, so sweet will have to do.

When I was in the first grade I had to have an emergency appendectomy two weeks before Halloween. This is back in the day when surgical patients were kept in the hospital for a week, then home for two weeks of bed rest, not like today when they have you walking the halls about ten minutes after you’re out of surgery. Actually being “sick” was kind of nice. All the neighbors brought  dinner and my favorite goodies. It was like having a birthday party that lasted a whole month.


Even though I was “sick” my mother never passed up an opportunity to further my social skills. I learned two important lessons in etiquette while I was recovering. First, you always say thank you for the “lovely” meals someone took the time to prepare for you, even though you wouldn’t eat some of them if you were starving on a desert island. Two, if someone gives you a book, toy or game and you already have it, keep that information to yourself and say “thank you.” 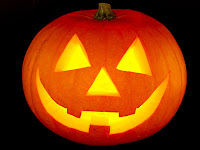 The gifts and attention were entertaining, but I was very upset that I was going to miss out on all the cool Halloween activities at school—especially the Halloween festival that was legend in my town. I was going to miss the cakewalks—my favorite—and lobbing ping pong balls to win goldfish in a bowl. On top of all that, the doctor said I could not go trick or treating. Worst of all, I didn’t get to be anything for Halloween. I was crushed. Even Mrs. Emmon’s delicious lemon tarts could do nothing to raise my spirits. I told my parents I was going to sleep and I didn’t want to wake up until the day after Halloween.


My mother was a wonderful, caring person and took her children’s happiness to heart. Even though  she didn’t sew, she borrowed a neighbor’s sewing machine and, in secret, made me a black cat costume. No store bought costume for this woman. If I couldn’t go out trick or treating, she was going to bring the trick or treaters to me. 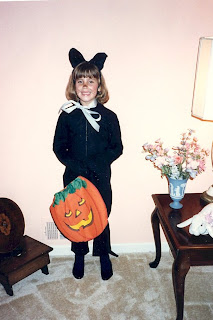 It was a warm night for late October in Ohio. I sat on our big front porch on a bench decked out in my new cat suit, a huge basket of candy beside me. My pumpkin trick or treat bag hung nearby on the railing. All of my friends dropped by for apple cider and pumpkin doughnuts  before they started their door to door pursuit. Each friend dropped one of their candies into my bag and took one for themselves out of my basket. All in all, it was a good night. My mother single handedly saved Halloween for me that year. Yes, the seams in the cat suit were a little irregular, the zipper may have been crooked and one leg was shorter than the other by a few inches, but it saved me that day.


Some forty years later, I still have that black cat suit. My daughter wore it when she was six. When the next generation of trick or treaters shows up, it will be waiting for them. If it only gets worn once every 40 years, it should last another five generations!

Christy McKee is a contemporary romance writer. Her first novel is Maybe Too Good to Be True was released by Muse It up Publishing in August, 2012. 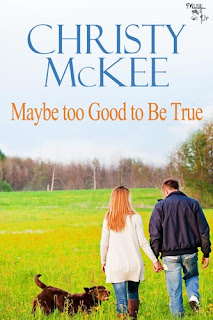 Gabrielle March has always known her place in the world and it is clearly not in the ranks of the rich and famous. Now she’s about to get an amazing gift from someone who is rich and famous that will rewrite her past, change the course of her future and put her life in danger. As someone who’s always considered herself merely a spectator in life, Gabrielle will have to break out of the confines of that mind set to make her dreams a reality. All she needs is a mega dose of courage and some positive thinking— two traits in short supply—to finance her own video production company and take her rightful place in a world that should have been hers all along.

After surviving the divorce from hell, corporate king pin, Pierce Hastings, is back in the game. Finding the right woman was not happening until the exasperating, opinionated, utterly charming Gabrielle March invades his life. He’s baffled that a woman so outwardly bold and confident harbors such self doubt and low self esteem beneath her skin. Pierce wants to spend the rest of his life with her but first Gabrielle must learn to love herself and believe in her amazing talent. Known as the “fixer,” Pierce wars with himself to remain “hands off” until Gabrielle figures things out for herself and chooses to become the woman he knows she can be.


Pierce answered him with a glare. What the hell was wrong with him? What difference did it make what she thought of him? Until a few weeks ago, he had never heard of Gabrielle March. So why had she suddenly become so important to him?
"I think our Gabrielle has gotten to you little brother. What a pleasant change it is for you to be the one cooling your heels."
The crunch of gravel drew their attention to the driveway. When Elizabeth’s blue Mercedes came around the curve, Pierce abruptly turned his back to the driveway and leaned against the porch railing.
James snorted with laughter. "Wouldn't want the lady to know she'd been missed would we." He sauntered down the steps to greet Gabrielle.
"Did you have a nice afternoon?" James opened her car door.
Pierce swiveled to face them but remained on the porch, propped against a sturdy post, his strong arms folded across his chest. "You missed some excellent water skiing this afternoon, Peaches."
Gabrielle came even with him on the porch. "Really? Why I'm surprised you need skis at all," she sniped. "I assumed someone like you walked on water."

Available at Muse It Up Publishing

Hi, Christy! How sweet of your mom to make sure you still had Halloween.

Thanks, Susanne. She was a very thoughtful woman!