Halloween...where does this custom originate?


So, Halloween is being promoted aggressively in Australian shops this year. Alongside aisles of Christmas decorations we have elaborate pumpkin lights, lamps, figurines, chocolates, cobwebs, witch motifs etc etc.


The trick or treat custom has been gaining popularity here too. Ten years ago having children arrive dressed up as ghouls and wanting sweets was a rarity. Now it's wise to be prepared.

Looking at the origins of the commercial hype the blame tends to immediately be focused on the American hysteria generated during Halloween. This trend towards Trick or Treating seems to come from the USA but the preoccupation with Halloween dates from a different continent and custom base.

There are several sources of celebration. So although the American's have taken the commercial side, they are only borrowing from previous traditions. We in Australia are competing for the precious commercial dollar and are following hard in their footsteps.

Despite the origins, some stories are quite dark and scary, fairies swapping children in their cots... etc, the spirits of the dead returning... the children seem to enjoy dressing up and overdosing on sugar.

As long as they don't bounce off my walls when they have consumed their ration of sugar, it's okay with me! 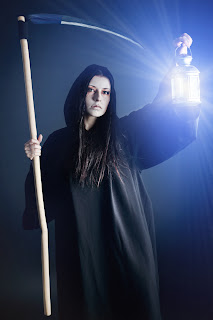 The idea behind Trick or Treating comes from the old custom of collecting foodstuffs for the feast to celebrate Samhain.

Believing Samhain was a time when the door to the otherworld opened and allowed the spirits of the dead to revisit their homes, people prepared feasts, inviting the spirits to share their repast.

The open door also meant nasty creatures could pass through as well, and to protect against them costumes were often worn. The collection of goods from families was hoped to bring good fortune for the giver, and the idea of collecting in costume became part of the custom. 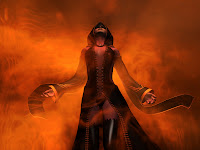 The Christian church's All Hallow's Eve/All Saints Day was the day that the souls of the dead could pass on.

Until that time they wandered among the living, and on All Hallow's Eve they had a chance to avenge any wrongs done to them while living.

Thus wearing costumes or disguises became popular so the spirits didn't recognize people. The custom of baking soul cakes and 'guising'... trick or treating began to be common too. 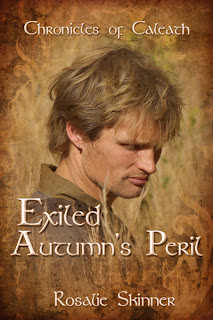 As a treat, no tricks involved, I am offering Book One in the Chronicles of Caleath, FREE on Amazon for five days leading up to Oct 31st.

If you have not yet discovered this epic fantasy science fiction series... take this opportunity to join Caleath and his adventures FREE.

Posted by Rosalie Skinner at 9:00 AM

Wow, great treat. :) And thanks for the information, too! My daughter has actually been asking me about the origins of Halloween.

I wrote a story about the origins of Halloween. It's in the hands of Jeanie Pantelakis :)

Hi Rachel, I always felt it came straight from the USA.. but discovered there is a far more colourful background. One I can embrace, though inviting spirits of the dead to dinner isn't quite my idea of good company. :)

Otin...congratulations. There are so many different myths and legends surrounding the time of harvest, I imagine you have a great story there.