In celebration of Halloween, a holiday known for elaborate costumes, we have a special interview conducted by music journalist/artist Shivaun Corbin from Janie Franz' book Sugar Magnolia. Shivaun is talking with one of charismatic rocker Daniel Madux's backup singers, Madge, who's been studying costume design. Let's see what they have to say about Halloween costumes.

Shivaun: Madge, hun, it's so good to see you again. It's been, what, a year since we first encountered each other at Daniel’s mansion, Sugar Magnolia.

Madge (kisses Shivaun on the cheek and takes a seat): It's been ages! You're looking good, girl. (Leans in close) So, why are we here? Did you hear some juicy gossip about Daniel?

Shivaun (laughs): No. We're here to talk about costumes. Halloween costumes in particular. Since you're an expert, I thought the readers here would love to find out what you know.

Madge: Hmm. You know that Halloween really is an ancient holiday. It dates back to the Celts in Britain, Ireland, and even France. They celebrated a festival called Samhain (pronounced sow-in) about 2,000 years ago. They wore costumes, usually of animal heads and skins, some say to fool the spirits who were said to be walking those lands on dark nights at that time of year. Others say it was to somehow identify with animal beings or to honor the dead who’d passed the year before….. Shoot, Daddy Walter better not hear me talking about pagans like that.

Shivaun: Well, didn't the church come into the celebrations?

Madge: Well, yeah. Around 1000 AD, the Catholic Church wanted to replace the Celtic festival of the dead with something that was sanctified. So they made Nov 2 All Souls Day and All Saints Day Nov 1. They had parades and bonfires just like the pagans but dressed up as saints, angels and devils. There was a Middle English word… Let me think…. Alholowmesse meaning All Saints' Day. That soon became All-hallowmas or All-hallows. The day before that holiday, the eve, was called All-hallows Eve and shortened to Halloween.

Shivaun: So how do we go from costumes of saints and angels and devils to, say, a Green Lantern costume or a gypsy dancer?

Madge: Masquerade Balls or Masked Balls were popular in the 15th century among the royalty, especially in France. They weren’t especially for Halloween but almost any royal event that required extra pageantry, like a wedding for instance—and not just the royal family: ladies-in-waiting, minor lords, etc. Some were just elaborate dances.

Shivaun: And those costumed affairs spread to England then?

Madge: Oh, yes, and much later to the landed aristocracy here in America. Costuming became a big deal for the theatre and Hollywood and eventually found its way into Sci-Fi conventions where costumes became quite detailed copies of movie and graphic novel characters. Some even were from well-read books like the Harry Potter series.

Shivaun: But aren't other groups very detailed oriented about costuming?

Madge: Oh, yes! The Society for Creative Anachronism, a medieval organization, prides itself in the authenticity of its members' costumes. Everything is usually hand-sewn. No use of zippers or plastic buttons. It has to be of the period.

Shivaun: That's true for some other re-creators, too, right?

Madge: Absolutely. There are Revolutionary War and Civil War groups, Voyageurs, and black powder re-creators who have to have period costuming.

Shivaun: Have you thought about doing costuming for some of them?

Madge: I would---if they offered me the right price. But I enjoy theater and movies more. The wide range of eras we can draw from and still create something new and fresh.

Shivaun: Would you want to design your own fashion line someday?

Madge (snorts): You mean Rock Star Chic? I wouldn't dream of it….. Well, maybe one day I might draw from all the eras I'm playing with right now and find my costuming voice…. Say, what are you wearing for Halloween?

Shivaun: I haven't a clue. I have two invites and I don't know what the heck I'll come up with.

Madge (leans really close): Oh, let me costume you, baby. I'm thinking of something in leather.

Shivaun (clears her throat): I think our readers have a clearer idea of where Halloween costumes come from now.

Sugar Magnolia by Janie Franz is available from Muse It Up Publishing in a variety of digital formats. 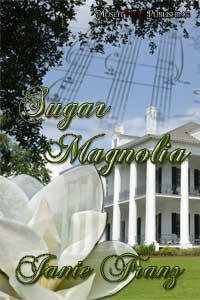