I don’t see dead people. I hear them. I talk to them. Boy, you should try that. Talk about people looking at you like you’re a freak. That’ll do it.

Take today in math class. We are taking this test, see. I’m concentrating real hard on this problem trying to figure height or something. Then I hear this.

I jerk up in my chair, looking around for the guy doing the talking. I glance at the kids on either side of me. Nothing. I look up at my teacher. He’s glaring at me.

“Great,” I whisper. “He probably thinks I’m trying to cheat.” I bow my head and focus on the problem again.

I shake my head in hopes of tossing the voice out, but it doesn’t work. I should know better.

Every time I rebel against them, I end up in trouble. Just what I need now while I’m trying to take this test.

“Would you be quiet? I’m trying to take a math test,” I whisper fervently.

“Oh sure, that’s okay for you to say. I’ll never take another test again.” His voice broke up, kind of like bad radio reception.

“Not my problem,” I whisper, but putting emphasis on each of the words. I can feel the stares of the kids around me. Great.

“Look, I haven’t talked to a dead person yet who didn’t say that. Kind of goes with the dead part. I can’t do a thing for you. Believe me, if I could, and if it would get rid of all of you, I would. Now leave me alone. You’re going to make me fail this test.”

I hear him snort, like he has to blow his nose, if dead guys really do that. Then comes the kicker.

“I just want another chance. I promise I’ll do better.”

“I’m going to say this once more. Not my problem. Now leave.” I wrote three exclamation points on my paper just so he would get the picture.

Okay. I’m fed up with this guy. I can’t even remember the formula for whatever I’m trying to find. I am definitely going to fail math if this guy keeps on yapping.

Out loud I say, “Bud, I don’t give a damn if it isn’t fair. Just shut the hell up so I can get this test done!”

Did you get the part where I said “out loud”? Yep, that earned me an F on the test AND a trip to the AP’s (that’s assistant principal’s) office. I couldn’t even defend myself there. What was I going to say? “Excuse me, I’m sorry I blurted out loud in class in the middle of a test, and I’m sorry for swearing, but you see, this dead guy wouldn’t shut up.” Yeah, that would have gone over well. Nope, I just had to sit meekly back and say politely, “It won’t happen again. Had to be the stress over the test.” You get the picture.

He sends me to my next class with several of the same kids. As I take my seat, I see a couple shaking their heads. I just shrug and mumble something like “Idiot dead people.” No one goes out of their way to talk to me. I think they’re afraid whatever I have will rub off on them, or that I’ll go bananas or something.

And when my parents get home, and I tell them what happened...Well, I may be the one shouting
“It’s not fair!”

It would be one thing if I talked to famous dead people. You know like that Elvis guy my mother still drools over? I mean, really? Like the guy would be seventy-something today! Anyway, if I talked to him, I could give my mom a personal message like “Sorry we never got to hook up.” That would be something, don’t you think?

No, the dead people who talk to me are just dead nobodies. Nothing exciting to say. Nothing going down. They’re just hanging out, waiting for I don’t know, to be more dead, I guess. Or, to see how much trouble they can get me in. If I could just ignore them. My mother told me that all the time when my older brother would pick on me. “Just ignore him, Rose.” Yea, easier said than done. I’ve even tried communicating by ESP hoping to keep my temper. That didn’t work either.

So now I sit here in my bedroom trying to work on my history project on ancient Egypt. You know, the kind where the teacher puts you in a group, and then no one in the group does anything. Yep, that’s my luck. The project is due the day after tomorrow, and I’m the only one who has done any work. After what happened today, I’m having a hard time focusing, It’s easier to sit here and daydream.

OMG! Do the dead have no respect?

And just who is this guy? This isn’t the same voice. That’s nice. Now I have an army of dead people invading my brain. Too bad they can’t do this project for me.

Who is this idiot?

“Listen. I am done with dead people today. This is my room, my space, and I don’t want you in here. I’m not sharing my things with dead people! And my name is Rose, not Roose.”

“Look, I’ll make you a deal. You do my homework, make my bed, and clean out my closet, and we’ll talk.”

I wait. Nothing happens.

I must be going nuts. OMG. Who tries to deal with a dead person?

Will this guy never give up? I cover my ears even though I know it won’t do any good. Why can’t I at least talk to interesting dead people, instead of these whining ones?

Sitting at my desk, I’m determined to get to work. I glance at my King Tut ticket stub on the wall. Now that would be one dead person I’d talk to, especially about this project. At the age of nine he ruled all of Egypt. And his tomb wasn’t discovered until 1922, more than 2500 years later, by that man Carter.

I touch the picture next to it. You know, the one where Ankhesenamun and Tut on the back of the Golden Throne. He is sitting in the throne; she is standing facing him, her arm outstretched, touching him. I’m not a romantic, but when I look at that picture, I can feel their love for each other.

Yep, I could talk to Tut, but I’d rather talk to his wife, the mysterious and beautiful Ankhesenamun. The Lost Queen.

Sometimes I imagine myself as her talking with Tut. Mostly we talk about what’s happening in Egypt, and what we have to do today. I show my support for him with a simple touch of my hand. Other times, we talk about where we’ll be buried. They did that, you know. Had their burial chamber ready sometimes years before their death.

On days when I’m feeling depressed--and today looks to be one of those days--I imagine saying goodbye to Tut as he dies. I assure Tut that we’ll meet in the After Life. Then I go to bed and wonder what it would be like to wander the earth looking for my husband’s spirit or ba. I wonder if he looks for her.

I turn around and scream. I look at the picture and then scream again. 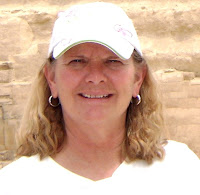 Author Cheryl Carpinello writes Middle Grade/YA Arthurian Fiction. Her latest book The King's Ransom (Young Knights of the Round Table) is a 2012 Silver Award recipient from Children's Literary Classics. It is available from the Muse bookstore and Amazon.

The above story is from her next MG/YA novel that takes readers from Medieval Wales all the way back to Ancient Egypt.

Visit her blog Carpinello's Writing Pages for children's book reviews and author interviews. Her web site Beyond Today Educator contains information on the Arthurian Legend and her Medieval writing workshops.

I like the sound of this one, Cheryl. Do you have a release date yet?

Hi Pat. Looking to have the 1st draft finished by the end of this year. Planning on late 2013 for a release.

Sounds great so far!! I know several teens who would eat this up!

Thanks, Emily. Glad you stopped by!