As a writer, I’m always mining my own life for material, but nothing I write is truly autobiographical. In Elixir Bound several of the characters are inspired by real people (and one is even named after a real person). Note I said “inspired.” It’s not that I actually wrote a book about people I know. Even if Elixir Bound didn’t take place in a made-up world, it’s still far from a memoir.

Like real people, though, characters should have more than one side to them, and they should have faults. Maybe you know someone who is super sweet and generous with her time. She doesn’t lose her temper very often (and here comes the flawed part), but when she does, watch out! The flip switches and she becomes a crazy person.

Okay, I’m exaggerating a bit here, and the person I know isn’t nearly that bad. But the character inspired by this real person is that bad because the story calls for her to be that way. Characters are often larger than life, and that’s a good thing. They should be. (Larger than life doesn’t necessarily mean loud or in-your-face. It could be a character is shy, and the larger than life part is that they are so shy it is debilitating.)

Reading gives us the chance to live vicariously through a character. I like when I see myself in a character, but I like it even better when that character is an exaggeration of any self I can imagine (good or bad). So provide your readers with interesting, dynamic characters that are more than the real people that inspire them.

Katie began writing after her 16-year-old sister unexpectedly passed away. Writing was a way to help her sister live on in the pages of a story. Her debut YA fantasy Elixir Bound is about Katora Kase who must decide if she will become guardian of a secret healing Elixir and bind herself to its magic. It is available from the MuseItUp bookstore, Amazon, Barnes and Noble, and other ebook retailers. Her picture book app The Bedtime Knight released earlier this month from MeeGenius. For more about Katie, check out her website www.katielcarroll.com. 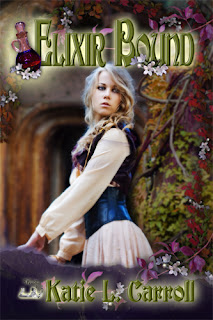 Katora Kase is next in line to take over as guardian to a secret and powerful healing Elixir. Now she must journey into the wilds of Faway Forest to find the ingredient that gives the Elixir its potency. Even though she has her sister and brother, an old family friend, and the handsome son of a mapmaker as companions, she feels alone. It is her decision alone whether or not to bind herself to the Elixir to serve and protect it until it chooses a new guardian. The forest hosts many dangers, including wicked beings that will stop at nothing to gain power, but the biggest danger Katora may face is whether or not to open up her heart to love.

Posted by MuseItUp Publishing at 8:31 AM