Writing romance in your mystery and vice versa by Maggie Toussaint


Writing romance in your mystery and vice versa
by Maggie Toussaint

The realm of mysteries has clearly defined categories. There are thrillers, cozies, police procedurals with hard-boiled detectives, paranormals, and more. Authors stretch the mystery genre to make it their own by adding elements such as arts and crafts, animals, ghosts, music, vampires, and busy-bodies, to name a few.

But what happens when an author blends a hearty dose of romance into the mystery world? Does that change the classification of the book for editors and bookstore placement?

To answer that question, we must put on our editorial hats and determine the driving force of the book, romance or mystery. Full length books invariably contain supportive subplots, such as a secondary mystery or a secondary character romance, which further cloud the “what is it” book genre. Let’s examine the genres of romance and mystery in more depth.

Romance readers expect interpersonal conflict in the story. They enjoy traveling along with the hero and heroine (or the main characters if it is a same sex love story) to experience the emotion of falling in love. They worry if the couple will overcome their trials, they rejoice when the couple finally gets it together. The given in romances is the happily ever after resulting from the triumph of love. That’s true no matter which genre of romance you read.

In a romantic suspense, the love story between two characters is the over-arching story line. Suspense elements raise the stakes for the main characters, placing obstacles in their paths, oftentimes threatening their lives. Finding love and committing to each another provide the happily ever after and conclude the story momentum for a romantic suspense. The danger element, though integral to the plot and highly entertaining for the reader, will usually conclude first.

To write a romantic suspense, the majority of the scenes relate to the romance, a lesser amount of the scenes will boost the suspense. A rule of thumb that is often quoted in the romance world for a romantic suspense is that the blend is about 60 percent romance and 40 percent suspense. A story with a higher percentage of suspense will cross genre boundaries into the mystery world.

Changing gears, a mystery with a strong romance subplot will devote more scenes to the mystery and less to the developing relationship. Depending on the mystery genre, sex and violence may occur off-screen, so that the author builds up to the moment and then allows the reader to use their imagination to fill in the blanks.

Within a mystery, a protagonist, the story lead, actively seeks an answer to a crime or puzzle. The antagonist, or the villain of the piece, can be a known threat with no proof of wrongdoing or he/she may be an unknown, acting in such a concealed way that the reader tries to determine who-dun-it before the protagonist solves the puzzle. Authors throw in red herrings to misdirect the protagonist and the reader and to heighten the story tension. The driving force in a mystery is finding the answers the protagonist needs.

Adding a romantic relationship to a mystery often raises the stakes for the protagonist. He/she is torn by wanting to protect the other person and fearing that the other person’s motives are suspect. The romance adds emotional depth to the lead character, forcing him/her to act out of his/her comfort zone, and increases the level of story conflict.

In series mystery with a romance subplot, even if the protagonist finds comfort or happiness in a relationship in a story, that partnership is doomed to have severe ups and downs in subsequent books. The romance will continue to serve as a means of conflict because conflict drives a story. Though romance is present in the story, it occurs around the framework of the mystery, and no happily ever after is promised.

In a stand-alone mystery, a romance subplot may end well, though it is not the focus of the plot, the mystery is.

To recap, a mystery with a strong romance subplot has the majority of the scenes devoted to figuring out who-dun-it and how they did it; the romance subplot adds tension and conflict to the story but does not promise everlasting love. A romantic suspense is driven by the love story between two individuals; the suspense subplot adds to the conflict and tension of the story by forcing the characters to make choices under pressure.

A happily ever after is implied or stated in a romance novel.

A sense of justice is served, along with a triumphant protagonist, accompanies the ending of a mystery. Both endings are satisfying to readers. To determine if your book is a mystery with romance or a romantic suspense, define the main plot and ensure that the majority of scenes are devoted to that story line.

The balance point for one author

The best thing to do is to write a great book that fits squarely in one genre. However, if you’re like me and your stories come out a blend of romance and mystery elements (or other genres blended with mystery), rest assured that it is still possible to get published, but most likely you will have to work harder to find the right publisher.

When I first began marketing my work, I received mixed criticism, until finally one day an editor asked point-blank if the story was a romance or a mystery. I popped right up with an answer, “It can be whatever you want it to be.” Imagine my surprise when the editor came right back with, “What do you want it to be?”

That was an eye-opener. Editors don’t have time to tell you what your story is. I took a look at one of my stories, making an Excel spreadsheet and noting which scenes supported the mystery plot and which supported the romance plot. The split was about 50-50, but the blend was bad, with the romance scenes frontloaded and the mystery scenes backloaded, which led to an aha moment.

Yes, it’s important to make your characters three-dimensional, but it’s equally important for the author to exert firm control so that each segment builds upon both plots. I guided the rewrite of the story with the same mindset as disciplining a small child. A firm stance and positive reinforcement for getting it right goes a long way toward training yourself how to write marketable books.

Though this advice is for blended genre authors, these tips should come in handy each time you sit down to compose or edit. Every sentence you write should be the very best you can make it. Don’t think to yourself that my writing is better than a crappy published book I read the other day; make sure it’s as good as a great book you recently enjoyed.

Find a way to keep yourself on task as you write or edit so that your finished product is a better fit for an already established genre category. Failure to write to an established bookselling category, unless you are the next J.K. Rowling or Diana Gabaldon (authors who broke the rules and still made it big), will result in a file folder full of rejection letters. Once you break in, you will find that published authors have slightly more leeway to bend the rules.

Conflict is the story engine in fiction. Whether you are writing a mystery series with a romance subplot or a romantic suspense series, each book must delve into a new aspect of interpersonal conflict. Tension can arise from the setting (his house or hers), from their immediate family (nothing like kids and pets to add spice to your characters’ lives), from extended family (a relative in need of food, shelter, or money), from their careers (no time for fun), or even from the couple’s disparate viewpoint on long-term commitment.

The spreadsheet idea works well for authors who are more typically known as “plotters,” because they tend to work well from an outline. Authors who are “pantsers,” as in they write without much pre-writing routine, may respond better to different methods of tracking the story scenes. Pantser friends of mine have used brightly colored sticky notes or note cards to help get them organized after they spit out the first draft.

All over but the shouting

When it comes down to it, I enjoy writing both types of stories. That dichotomy makes me a mystery author and a romance author, but most of all, it makes me a storyteller. 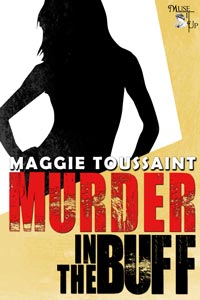 MURDER IN THE BUFF: Blackmail photographs of Molly’s father and several town leaders cavorting with a nudist have a new meaning when the woman is murdered. Reporter Molly Darter is on the case, trying to save her dad and rebuild her life after she caught her husband kissing her sister.

The digital mystery is available now!
Buy it here:
Muse It Up Publishing
Amazon.com
BarnesandNoble

A scientist by training, a romanticist at heart, Maggie Toussaint loves to solve puzzles. She writes cozy mystery and romantic suspense books, one of which won Best Romantic Suspense in the 2007 National Readers Choice Awards. She has four published romantic supsense books and four mysteries, including her campy cozy from Muse It Up Publishing, MURDER IN THE BUFF. Visit her at www.maggietoussaint.com and http://mudpiesandmagnolias.blogspot.com/ .

Posted by MuseItUp Publishing at 10:02 AM

Thanks for a very clear breakdown of this sometimes bewildering genre, Maggie. I write romantic suspense, but in retrospect some of my stories have been hard to categorize as such because of the percentage of romance versus mystery. I use a spreadsheet, but not as a plotting device. It acts as a record of scenes after the first draft, prior to starting the revision process. I can see where it could be very helpful to add a column for tracking the balance of the romance and suspense focus of scenes.

My computer thinks its on vacation and doesn't want to work. But I'm doing my best to wrangle it into submission.

I wrote this article because I needed to be able to articulate the difference between my romantic suspense novels and my romantic mysteries. And whenever I get stuck plotting a book, I refer back to it for inspiration. Blending anything is always a delicate job, but once you get the mix right, the engine runs just fine!

So glad you dropped in with a comment. Wishing you all the best with your writing.