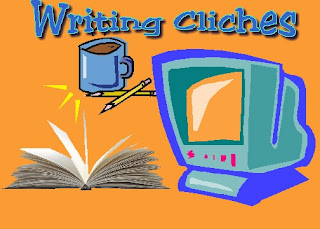 For some reason clichés are not approved by editors when checking my stories. I don’t know why. It makes writing as easy as pie. These familiar expressions are as good as gold when it comes to taking a short cut in your storytelling.

Instead of writing a paragraph about how bad the storm is, I can just say the rain is coming down in buckets. The reader knows exactly how bad that is. However, after sending this in to the editor,  the phrase will appear red-lined in the manuscript and a comment will show up in the margin gently reminding me that I should not use a cliché. But seriously, if I want to describe how hot the weather is in a story, why can’t I say it was hot enough to fry an egg on the sidewalk? That really does explain the heat factor!

When push comes to shove, a cliché is the way to go for me. For instance, when the coroner arrives at the death scene, why can’t he say the victim kicked the bucket? That is so much more colorful than saying he’s dead.

It makes me madder than a wet hen when I realize I have used clichés in my writing. For Pete’s sake, I KNOW the editors won’t let me use them, so I try to be conscious about it when I write and re-vise the chapters.

Still and all, once in awhile a cliché does slip into my writing. The solution is to carefully read through the story and concentrate on finding the little demons. To tell you the truth, I don’t always recognize them.  I submit the manuscript for editing on a wing and a prayer that I have caught every cliché and I won’t have the editor tearing her hair out when she reads it.

There’s no time like the present to change and recognize clichés in my writing. How about you? I plan to be as sharp as a tack when putting words down on paper so I can make it easier for me and my editor to get through the manuscript.

I’m not trying to pull the wool over your eyes. I'm vowing to do better on using clichés. Just notice how much I’ve improved already!

I use them in dialogue at times because I feel like that's the way people talk.

Well, Mike beat me to it. People use cliches. Therefore, characters use cliches. Not every other word, of course. But enough to sound real. (Which is also another reason to let the dialogue carry the story line more than the narrative, now that I think about it.) But just re-phrase a cliche if you're stuck for a description. Say it's hot, but you don't want to say an egg sizzled. Okay, don't. Say "Steam sizzled up from the sidewalk." Makes you feel pretty warm, doesn't it?

You hit the nail on the head! Seriously though, in Texas we use so many cliches, sometimes I forget that's what they are.

Yep, I myself use cliches in conversation, so obviously my characters are going to. But you know what they say, "avoid cliches like the plague!"

Cliches? YOu hit the nail on the head with this one!

Entertaining post, J.Q! There are several websites dedicated to clichés. Used judiciously, they can give just the right touch to dialogue, and even to prose, and it's fun to come up with new variations on old themes. But sometimes the old ones are the best.

That's a good peeve, J.Q! I wish there was a cliche checker that you could run, like a spell checker. When you read your own work, sometimes you can't see the wood for the trees :)

Hi Gail and Jim, You make a good point to use the cliches in dialogue. It does give an insight into your character's personality.

Thanks, Susan and Helena, I think we miss the cliches because we use them in our own conversations.--Giggled at your cliches...

Pat and Mike, thanks for commenting. I think using cliches in the right places connects with a reader.

Suzanne, oh yeah, I hit the nail on the head. Isn't that fun? I had a riot writing this piece. Thanks for stopping by.

It is unfortunate that editors do not realize when I use cliches, I use them in a new and ironic fashion, rendering them new. They never buy that explanation. Will begin seeking to eliminate the excess salt to my french fried purple prose.

Hi Sherry, Yes indeed. Editors don't buy my explanations for my using them either. Love your line of excess salt to my french fried purple prose. Thanks for leaving a comment!

LOLable, JQ. We use the "little darlings." as you call them, because people in real life do. They work. They paint a picture with no unnecessary words. They are the bain of my existance and I try to put the breaks on their use, but hey...they are so neat!
Thanks for your defence of cliches, JQ. Do you think readers hate them the way editors do?
Speaking of, it's back to the editing cage for me.

A good fun post, JQ. We all use them and it's such a challenge re-writing a sentence to get rid of them. I also use too many little homilies such as 'where there's a will there's a way'. My mother was very fond of the pithy saying and i've absorbed a lot of them. Anne

Cliches are perfect snippets of writing, that's why these expressions have lasted through the ages. Everyone uses them because they no better way to say what they mean.
Writers shouldn't. We try to be original and find expressions that will one day slip into general use and become cliches too.
Wouldn't it be wonderful. I'd be over the moon.

Hi Marsha, I'm not sure if readers hate them or even notice since cliches are woven within our everyday conversations.

Wendy, I never thought about the possibility of little ole writers like me coining a phrase that could make its way into readers' lives. That would be amazing. Good thought. Thanks.

You know, JQ, I think my writer's eye is getting sharper, because I detected three whole cliches in your excellent blog. Maybe even four. Really, it's the bee's knees. I'm sure I would have laughed even more if I had caught more of them.

Anyway, a really great post. And that's no cliche.

Oh John, there's no messing with the cliches, eh? You made me LOL! Thanks.