My name is Kim Cresswell and I have chronic pain.

At some point in our lives most of us have experienced some form of chronic pain—back pain, headache pain or arthritis to name a few.

In October 2000, I fractured my right ankle. Although the fracture was minor, within days my foot turned grayish-black and was swollen at least 10 times the size. Along with it came severe pain burning pain as if my skin was lit on fire, stabbing pain, prickling and tingling. I knew something was very wrong.

A trip back to the doctor confirmed I had developed Reflex Sympathetic Dystrophy (RSD), a rare and painful chronic pain disorder that mainly affects woman in their forties and has been around since civil war times.

After researching the disorder a rollercoaster of emotions hit me.

Sadness...anger...disbelief and fear. My life would never be the same.

RSD is a debilitating disorder involving the skin, nerves, blood vessels, and bones. The sympathetic nervous system reacts to a stimulus for example, an injury, in my case a fracture. Blood flow is effected and to prevent you from further using the injured limb, the limb swells.

Pain is constant, unrelenting and is characterized by burning and is enhanced with every movement, every breath.

Swelling is sometimes localized, unrelenting, and progressive. Swelling intensifies the pain and promotes stiffness which can be the beginning of atrophy and deformity.

Stiffness like swelling, is progressive and results in less motion of the joints, which again, results in increased swelling and pain.

Discoloration indicates circulatory changes which diminishes the nutrition of the tissues of the skin, ligaments, bones and tendons. The result is thin, shiny skin, pencil-like fingers or toes and changes in ligaments.

The sad reality is 70% of people who develop RSD and don't receive immediate and proper treatment end up in a wheelchair for life or commit suicide (usually due to depression).

I am one of the lucky ones.
I received treatment within the first few weeks consisting of numerous rounds of IV drugs, and dozens and dozens of sympathetic nerve blocks (horrible long needles inserted into my back). It took three years of pure hell to be able to walk without a cane, to walk down a set of stairs and to this day, I still struggle with chronic burning pain and the feeling of walking on broken glass.
Click here to learn more about RSD.

But one of the greatest things happened after I developed RSD...

I returned to my first love, writing.

My life would be better!

REFLECTION is my debut romantic suspense and was released in January. 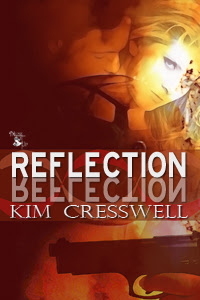 Florida investigative reporter, Whitney Steel, has lived in the shadow of her legendary father long enough. To prove herself she needs to find the “Big” story.

Now it may kill her.

After receiving a lead pointing to the world's first cloned human, now a small child, Whitney vows to unravel the truth. However, sifting through the facts proves to have dangerous results, including death threats and murder.

When she's nearly killed, but is saved by undercover FBI Special Agent, Blake Neely, he refuses to let her get in the way of his own objective—at least not right away.

Caught in a lethal game between a billionaire obsessed with genetic perfection, his hit man’s thirst for retribution, and a Colombian drug lord fresh out of prison determined to make Blake pay for his twin brother’s death over a decade ago…

Can they save an innocent child before it’s too late?

I had never heard of that, Kim. I'm glad you were one of the lucky ones.

Hi Jerri. Believe me I had never heard of RSD until I ended up with it but I'm glad it brought me back to writing. :)

This month's Muse posts have really held some eye-openers. I'm glad you were fortunate enough to get help before before it progressed.

I've never heard of RSD but I understand nerve pain. I have CMT which affects peripheral nerves, then causes muscle wasting in lower arms and legs. I am also fortunate that a generic drug called Gabapentin controls the nerve pain. I've been using a wchair since the age of forty-five.

Like you, I discovered a love for writing. I'm going to check out your book.

Best wishes and many prayers that your pain can be eased.

Thanks, Leona. Sorry to hear you have CMT. I'm also taking gabapentin which does help with the nerve pain. I also have Fibro so it's been an interesting journey. So glad you discovered your love for writing too! :)

I'm sorry to hear about your terrible pain, Kim. You talk about it with so much fortitude. I'm glad something postive came out of it, with your novel. Good luck with your writing.

Kim, you're an example of good coming out of bad. But goodness, I'm so sorry for you to have endured this. I'd never heard of RSD either. Thank God for drugs that can make a difference. Good luck with sales.

Thanks Marsha and Helena. It's hard to believe RSD has been around since the civil war and so many haven't heard of it. Awareness is a wonderful thing no matter what the disorder or disease. It gets people talking. :)

Just came across your post here from seeing in Google Alerts... wanted to reach out and share that many more RSD/CRPS people than ever before are getting help... many stories and much of the information is on our site... some from mirror therapy, some acupuncture... have talked to some that used Hyperbaric medicine... and even some that tried Hemp Oil to great success .. the therapy we think shows the most promise is called Calmare... some RSD/CRPS peope are going down to zero pain from it... and many to 1/10 or 2-3/10 which is a HUGE improvement! Thanks...