Giant In A Wheelchair

My book, Tex, The Witch Boy, is a paranormal thriller, murder mystery, comedy, romantic tale about high school bullying. Sums it up quite well. 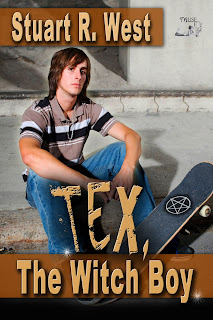 But there’s an important element about the book I haven’t yet addressed. Probably because it’s been too painful. The main character’s father is in a wheelchair. Tex’s dad suffers from Multiple Sclerosis. He’s based on my father.


One of the goals I set out to do upon writing Tex, The Witch Boy, is show how it’s possible for someone with a physical disability to live a full and normal life. Tex’s dad is a loving, independent, capable parent holding down a well-paying job. My dad was the same way.


I didn’t agree with my dad on politics, religion, societal beliefs, pretty much anything. Hey, I was a teenager. That’s what we do.


But, in many ways, he was my hero. Every day he’d roll his wheelchair into work, sit behind a desk, keep a stiff upper lip, not complain about his lot in life, make it home by 5:30, and still have time to be a dad. How’d he do it? I don’t know.


Some time back we had a falling out. Can’t even remember why, in hindsight.  Yet, my wife, daughter and I took a vacation to Florida to visit my “snow-birding” parents. Through a convoluted turn of events, my mom broke her leg and it fell upon me to drive my dad back home to Kansas.


What a trip. I heard stories I’d never heard before (um, repeated quite frequently), tales about my brothers I had no idea about. Questions were asked and evaded, jokes were told, topics were brought up I thought I’d never talk with my dad about.


We stopped to use a public restroom. It was the first time I saw him truly hurting. I had to escort, help, lift, aid, guide him. I watched as he wrestled with his body, pain across his face, attempting to do things he used to be able to accomplish by himself. I realized how truly vulnerable he was. But not once did he complain or whine. Here was a man who gave himself completely over to his family despite his physical handicap and pain. Nothing was going to stop him even though it became painfully obvious matters were finally out of his hands.


“What’re you talking about, Dad?”


“I wasn’t able to toss a ball around with you. Things like that.”


I looked at him and laughed. “Dad! For God’s sake, you know I’ve never even liked sports! You always were there for me!”  I clapped him on the shoulder. We were never a very touchy-feely family. But it was a big moment. It meant the world to both of us.


I’m glad we had that moment. I got to know him like I hadn’t before. My dad died shortly after that memorable trip.


In Tex, The Witch Boy, my dad lives on. Tex’s dad is a handicapable, frustrating, prideful, stubborn, loving father. He was easy to write.

Soon available at the MuseItUp bookstore and other venues.


Tex, The Witch Boy Trailer: http://www.youtube.com/watch?v=B6YA8yjNVMc
Coming in June, 2013 via MuseItUp Publishing: Tex And The Gangs Of Suburbia 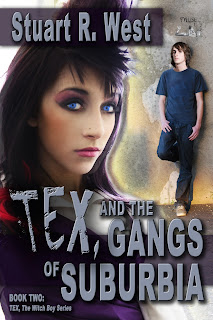 After working as a graphic and production artist for the last 23 years, the company for which I labored shuttered its doors in July of 2010, finally allowing me the time and mental energy to tackle something that I'm passionate about.

“Tex, The Witch Boy” is the first in a trilogy detailing the adventures of Tex and his friends. They're all young adult, paranormal murder mysteries dealing with current teen issues. The second book, Tex And The Gangs Of Suburbia, will be published by MuseItUp in June, 2013.

I'm married to a professor of pharmacy (who greatly appreciates that I now prepare dinner for her) and have a 20 year old daughter, who hasn’t yet decided what to do with her life. But that’s okay…it took me 25 years or longer.

I really liked Tex's dad in your book and wondered if he was based on someone in your life.


What a great tribute to your dad.

Thanks, Tammy! I do think my dad would've liked it.

I loved your post, Stuart. Your car journey is one of those memories to treasure, and your description of it is really touching. I'm glad you got that time with your dad before he died.

Thank you, Helena. At the time, the trip seemed like it'd never end. Now I wish it'd gone on longer.

Hi Stuart, I enjoyed your post. As a wheelchair gal myself, I can empathize with what your dad went through. My CMT was slowly progressive,so my four children were out of high school before I had to use a wchair.

I'm glad you had time with your dad. He will live forever in your book. I am looking forward to reading the trilogy.

Best wishes and good luck with your writing.

You go, Leona! I'm always thrilled to hear tales of folks rising above the blows life's dealt them. Sounds like you're more than up to the challenge. Nothing gonna' get in your way! And, thank you!

What a great story! I'm so glad you and your dad resolved your differences in the end. Thanks for sharing it with us.

Beautiful post, Stuart. How fortunate you are to have resolved the conflict with your dad. For you to tell him, he was there for you must have given him much joy and comfort. I'm not much of a cryer, but this brought tears to my eyes. Good luck with your series. It sounds really intriguing.

Marsha! I'm not much of a cryer either, but, um, this was a dog-gone tough post to write! But, you know, since I'm a man and everything, I'm not allowed to tear up. Wait...got something in my eye...

You did him proud, honey. Because this post proves -- he raised a man.

Thanks so much, Joylene!

Mickey B and the Blog of Wonder said...

I really relate to this post, not because of my father, but because of my son. He suffers from severe depression and is being treated for bipolar disorder. Still, life goes on and he is just as normal as any other kid, although I had to learn that lesson in the emergency room. I used him in my novel, too, but without the things that make him feel different.

Hey, Michael! Of course your son is normal. He's depressed and bipolar. Doesn't have to stop him from being awesome. Just keep parenting. That's what we all (hope) to do.

A beautiful story. It's so wonderful you had that time with your dad. I have your book to read and am looking forward to meeting Tex and his friends, along with his father.

Aw, thanks, Beverly! Very kind words. Much appreciated and I hope you enjoy the book.