Seventh Grader Learns About William Tell - Up Close and Personal


Miss Wickware is a 7/8 grade history teacher at Langdon Middle School.  Story on the street is really bizaare things happen in this classroom and fingers point to Miss Wickware, herself, as the prime suspect.  Is it witchcraft?  Is it magic?  Is she from another planet?

Take Billy Cooper, for instance.  He draws the name of a famous historical legend that lived in the fourteenth century and, somehow, ends up in the front yard of this William Tell character - it’s just a dream, of course – or is it?  Dream or not, Billy finds out exactly why William Tell is a legend.

Some facts about the legendary Mr. Tell:

A married man with children.

William Tell lived in what is now Switzerland, but at the time there were three small cantons (farming states) that would make up most of central Switzerland.  They were Uri, (this was William Tell’s home land), Unterwalden, and Schwytz.

Austria invaded these cantons and started confiscating their lands.

Rutli Oath – A pledge from the countrymen of Uri, Unterwalden, and Schwytz for when the time was right they would attack and take back what was theirs.

William Tell had to shoot the apple off of his son’s head because he refused to pay homage to the Governor Gessler’s hat that was placed on a stick in the middle of the town of Altdorf.

When he successfully did shoot the apple of his son’s head, he was arrested and was to spend the rest of his days in a dungeon under Governor Gessler’s castle. 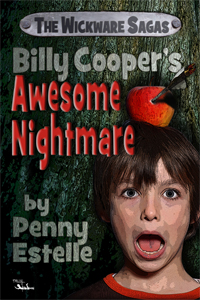 Billy Cooper’s Awesome Nightmare is the first story in the Wickware Sagas.  Others, coming soon, involve Molly Pitcher, Sybil Ludington, Francis Scott Key, and the Orphan Trains.  I can’t express enough how much I learned when researching these legends in history!  It’s been fun and educational writing the Wickware Sagas!

Thanks for stopping by today.  I will draw the name of one commenter and send a copy of Billy Cooper’s Awesome Nightmare in whichever format is preferred.

Stop by my website and see what other stories I have written.  I love visitors!
www.pennystales.com
www.pennyestelle.blogspot.com

As you know I've read your story about the legend of William Tell and think it's a great way to introduce young children to history. They'll love it. I was surprised to find another author at Muse who had chosen the same time travel topic as me, although my novel is for high school students and looks at the legend from a different perspective. This was a fascinating era wasn't it and Switzerland is so beautiful. I enjoyed my time writing in the medieval age as I'm sure you did.

I really did enjoy looking into William Tell. After all, I thought he shot an apple off his son's head and that was the end of it! Who knew!

I was browsing through the IMDB (movie database) and saw there's a William Tell movie in the works for 2014 starring Brendan Fraser. Yeah, I was looking up Brendan Fraser, who I've wanted to adopt since George of the Jungle.

That's the mummy guy, right? I love him!

Thanks for stopping Marva!