Dear Reader: If You Only Knew    or
The Headache I go Through to Figure Out This Story

I would love to say I have a specific process for writing. Confession: I don't.

My head is triggered by a word, a phrase, a picture, whatever. I might even decide, "hey, let's write a story about blahblahblah." And do.

San Diego or Bust came about after Handsome and I attended a convention in San Diego. I had not traveled there since I was a young adult; so everything seemed brand spankin' new to me. We stayed in the Gaslamp Quarter, toured the U.S.S. Midway, ate in Little Italy, sailed in the harbor past the Ronald Regan. Drove out aways to a friend's condo to party. Visited the Museum of Man, car museum, et cetera.

Everything was so awesome and sparkly. I had to figure out a way to put this in a story, not let this setting go to waste. So I began to play my favorite writing game-What If?

Since I write romance, I know each story has these elements: a hook, stuff in the middle to overcome, black moment, and a happily ever after. With this in mind, I wrote paragraphs to answer each What if? Then began tying them together, putting them in the correct order.

Unfortunately, this type of pantsing (because I write by the seat of my pants) takes longer to become the work I want it to be. I have to layer in setting and layer in emotion and layer in descriptions. I use Wordcounter.com to make sure I don't overuse words and then utilize the search and replace feature in my word file so I can write fresher. I get critiques and fix those problems. And then, finally...

I have a story worth submitting. Sigh and big relief.

So how did I do? Here's a teeny excerpt from San Diego or Bust:

My boyfriend is a dirt wad. I just decided.
With a humpf, I dragged my pink tote up the narrow aisle to the plane's exit, accidentally banging it into the seats along the way. The relieving notion of being back home in Sommerville caused the tension in my chest to fade a smidgen.
A quick peek to the exit told me where Davis, my boyfriend, stood waiting for the okay from the ground crew to head out. His glance my way didn't look at all pleasant. Similar to one wrapped in disappointment with a downward tilt of his mouth.
I didn't care much. I just decided.
The words creep, jerk, moron, and “why in the hell am I still dating him??” jumbled my thoughts around. My heart pounded as anxiety ratcheted inside me again.
Maybe I shouldn’t. Maybe I should not put up with him anymore.
The deepest part of me knew I shouldn’t be with Davis Griffith Swansea, III any longer. I was just in denial. Over the past year, I’d had brief, momentary twinges of dumping him; then, he’d go and do something incredibly romantic like bring me Godiva chocolates—“I know how you love these.” Or buy me a new book by my favorite author—“I happened to see this today.” Or whisk me off to an intimate dinner à deux at the latest and greatest bistro--"I know you'll like this place."
My head had gone stupid. 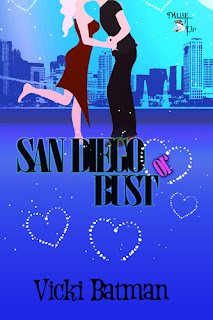 Bio:
Like some of her characters, award-winning author, Vicki Batman has worked a wide variety of jobs including lifeguard, ride attendant at an amusement park; a hardware store, department store, book store, antique store clerk; administrative assistant in an international real estate firm; and a general “do anything gal” at a financial services firm--the list is endless.

She has completed three manuscripts, written essays, and sold many short stories. She is a member of RWA and several writing groups and chapters. In 2004, she joined DARA and has served in many capacities, including 2009 President. DARA awarded her the Robin Teer Memorial Service Award in 2010.

Most days begin with her hands set to the keyboard and thinking "What if??"

Posted by Vicki Batman, sassy writer at 2:00 AM

I start the same way. I hear a phrase or a line of dialogue comes to me. It often takes me quite a bit of noodling to actually come up with the premis that goes with it. Still, that is where the life comes in a story. I have a hard time strictly following an outline. Good post. And for those who haven't read it, San Diego or Bust is a sassy, cute story.

I'm a pantser too. It takes me a bit to get to know the characters inside and out. Maybe I should try asking these questions. ;)
I know this book is going to be great. Can't wait to read it.

Hi, Pam! Don't you just love how something jumpstarts us into a project? It is so invigorating. And I truly appreciate the compliments. squee

Hi, Amber! Pantsers unite!! I heard it takes longer to write like this, but when the mind just runs with the flow, Wow. It is truly magical. I hope you can read and let me know what you think. hugs

Hi Vicki,
I love the 'What if' blab blah and allowing your brain go free with ideas. Great blog. Judy

Hi, Judy! So nice to meet you. I can't take total credit for the What If?? but it does work for me and you are right, it does allow for ideas to flow. Thanks for stopping!!!

I completely understand how one idea leads to a story and then we're off on a tangent of what ifs..Your book sounds cute and fun. Best wishes!

Hi, J Q Rose! Thank you so much for stopping. I'm hoping those tangents are fresh and new ideas too. hugs

I'm glad I'm not the only one writing by the seat of her pants. I love coming up with a what if moment to make my story sing!

Hi, Melissa! Yeah, for pantsers. I had no idea that was an option when I began writing and felt rather...inferior. Then the ugly truth came out! Thanks for stopping today.

Vicki, your "process" sounds a lot like mine. I'll get an idea from a snippet of something, then start the "what-ifs." I'm more of a plotster and do an outline before I begin a book, but I stray from that outline. I don't outline my short stories. I have San Diego or Bust and can't wait to read it. I love all your books.

Hi, Cara! I should have known we'd be like writers and I love your work too. Thank you for loving me. oxox

Hi, Marian! And flow you do so well. Hugs!

What if is how I always start my stories too. :)

Good luck with the release. I wish you many sales.

Hi, Janice! There's lots of us what if-ers out there. How much fun! And truly, thank you for the best wishes. Many to you too.