Dear Reader, I Fell in Love with a Sleeping Prince

When I began writing Quest of the Hart, I knew the prince was going to be asleep for most of the story. As a reverse Sleeping Beauty tale, there was no way I could avoid this. This posed two problems for me.

The first issue was easily overcome. I'd tell part of the story from the POV of the villainess. This was a lot of fun, as I was able to delve into the inner thoughts of why Princess Arabella wanted her brother dead.

The second was more difficult, especially when I realized Prince Devlin and Princess Kaylee really didn't know each other well. In fact, they'd only met days before Devlin fell under the sleep spell.

Kaylee never thought of herself as strong or adventurous, but she would never give up on Devlin. She knew if the tables were reversed, he'd do all he could to save her, not only because of love, but because it was the right thing to do. So how could she do any less? Besides, she'd felt a connection to him the moment she first laid eyes on him.

In the end, a few moments between Kaylee and Devlin before the spell, a dream (or nightmare, if you will) and discussions with Sabrina, work to give you a glimpse into Kaylee's growing love for the sleeping prince. 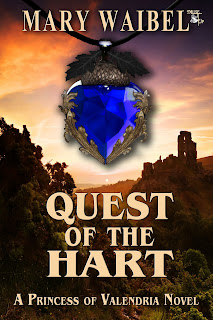 
Kaylee walked through the flower-filled garden, her face tipped up to the sunlight spilling down on her. Bees buzzed happily as they moved from flower to flower, the fragrant scent of the nectar they searched for filling the air. She closed her eyes, spread out her arms, and spun around in a circle, her laughter echoing off the stone walls.
“Open the gate, Kaylee. Let me in.”
She turned toward the voice and opened her eyes. Devlin stood beyond the gate, beckoning her over.
Kaylee skipped across the stone walkway, feet barely touching the ground. At the gate, she lifted the latch, but it was stuck. She tugged and tugged, but it wouldn’t open.
“Devlin! Why can’t I open the door?” Tears trickled down her cheek and splashed on the ground.
“Love holds the key.” He cupped her cheek in his hand and brushed her tears away with his thumb.
“The key to what? The gate?”
She knelt down and studied the lock. It was a simple padlock, shaped like a heart. The odd thing was, no matter what way she twisted it, she could find no keyhole.
“Love holds the key,” she whispered. “But how do I find it, and where does it go?”
Devlin smiled at her and suddenly Kaylee knew what she had to do. She leaned forward and brushed her lips over the heart-shaped lock. An image of Devlin shimmered on its surface then vanished as the lock clicked open and the gate swung wide.
Kaylee rushed forward, eager to be in Devlin’s embrace. But when he reached for her, his arms passed through her and faded into mist.
“Help me, Kaylee.” His voice echoed eerily around her. “Finish the quest. Only your kiss will wake me.”
“Devlin, I tried the kiss. It didn’t work.” She reached for his fading body, hands grasping nothing but air.
“You must finish the quest first. I love you!” His voice was barely a whisper. “Save me.”
“Devlin!” Kaylee lunged forward and the mist evaporated. “No! Wait!”
The sky dimmed and all sound in the garden ceased as a roiling black cloud rolled across the sky. Puffs of white swirled with every breath as the air turned icy and a bitter wind blew.
Kaylee turned. The gate was gone, and there was just a yawning black void where the garden had been.

You can find Mary at:

Quest of the Hart is available at:
MuseItUp Publishing
Amazon
Barnes and Noble
Kobo
iBooks

Good morning, Mary, It's one of the great things about being a writer, I think - being able to take the accepted and turn it upside down. the imagination is a truly wonderful place. Hope Quest of the Hart is doing well. Anne Stenhouse

Thanks, Anne! Taking the accepted and turning it upside down can be quite fun :-)

Ready to full emerge from my editing cave and read this book! :) Can't wait!!!

This one is next on my TBR list...can't wait to read it!

Awesome, Katie! Can't wait to hear what you think about it.