Natasha and Stewart take a leap in time

Natasha - Ah, Heather, you are prompt.  How delightful.

HG - I knew you’d be early. Reading, I see.  Are you enjoying your book?

Natasha - It’s a book of poetry. I’m able to hear Stewart’s voice as he reads to me.  I’m glad you gave me time to think about questions.  I’ve given this a great deal of thought.

Natasha - No. I won’t be cruel. To start, who is your favourite character in Natasha’s Dream?

HG - Stewart isn’t close by, is he?  I don’t want to upset him. I like Stewart, but I must admit you were my favourite in Natasha’s Dream. You were developed so the readers would cheer you on, feel sorry for you and I want to reach into the book, grab you by the shoulders and lecture you.

Natasha. - Goodness.  I’m thankful they can't. I'm not comfortable having strangers touch me. I’ve read the story came to you through a dream. Much like Keeghan is dreaming. Did you have another dream to inspire you for the remainder of the saga?
HG - No.  That was completely my imagination. My husband read the book and told me to keep writing.  The story needed developed further. It’s all his fault.

Natasha - I didn’t expect to chuckle while interviewing you. You are as witty as Stewart.

Stewart - I heard my name.

Natasha - Love.  Allow me to introduce you to the woman that gave you life. Hum. Perhaps that’s the wrong term.  This is not your momma, but Heather.  We are discussing our lives.  My life.  My character is rather bright, Heather. Surprisingly so.

HG - You spent a lot of time in solitude as a child. Reading, and discussing novels, you would be intelligent. The plot required siblings, education and values.
Stewart was written as a sweetheart. Gorgeous, smart, a real catch. The kind of guy any girl would give her right arm to date.

HG - It's not the first time, is it, Stewart?  Natasha, you had to be special to capture his attention.

Natasha - I must mention Goldie.  That lovely dog.  Was Goldie part of your original dream?

HG - No, but it made sense to include her. Animals give the opportunity to add humour to a scene.  To lighten the mood. Growing up with a dog, I was inspired. Smart and with that sixth sense, she was an easy character to write.  If only Goldie could talk. it’s a good thing dogs can’t talk.  Goldie would have ruined the story. Perhaps that will be another novel.

Natasha - We had a delightful visit with William and Keeghan yesterday. The computer challenged me. This small, um, thing, but I was enchanted when William showed me the picture of you and information about you. In particular we looked at books you have read.  Keeghan has read a number of books you have read and we concluded most have a moral. I am curious.  It there a moral to the Natasha Saga?

HG - Yes, every story needs a moral and for the Natasha Saga it’s greed.  Drives me crazy.  People are personally greedy, people running institutions are greedy.  How the world would be a better place if greed didn’t exist.

Natasha - Greed and power. Indeed.
The book is called Natasha’s Dream. How did you come up with the name. Stewart and I have discussed this, but we’d like to hear the thought process behind it.

HG - My husband came up with it.  We discussed a lot of names.  One being Crown of Denial, but when the story turned into a saga, I wanted a name that could carry throughout the saga.  Crown had it’s limitations.  Natasha’s Dream had a double meaning. Natasha Dreams of a different life.  Keeghan is having a dream.  The name connects the two stories.

Natasha - Given the fact I wrote a diary, the name of the next book makes sense. Natasha’s Diary - Any tidbits about the second book?

HG - Well, my editor Teale loved it. I quote “Heather, it was so good. The first book was good, but I'd say this one is even better.  It's just a real pleasure to read.”
Like the first book it may make you chuckle and could bring a tear to your eye.

Natasha - That is pleasing to hear.  What about Natasha’s Hope?  Once again I’m certain I know the answer.

HG - Natasha’s hope.  Natasha’s Hope.  Either works. A verb or a noun.

Natasha - I love double meanings. And the saga will end with Natasha’s Legacy.

An excerpt from Natasha's Dream


“Natasha, allow me to introduce you to my sister, Victoria.”


At ten years of age, with long blonde hair and her brother’s blue eyes,
Vicki would one day be a beautiful young woman.


The young girl smiled, and then turned her attention to the river.
“Momma promised I could swim if you’re able to watch me.”
Without waiting for his response, Vicki tied her hair with a ribbon
and ran into the river, the dog right behind her. Stewart stood and
extended his hand to assist Natasha to her feet.
“As I recall, I’m ahead when racing to the water,” he reminded her
with a wink.
Determined to win a race, Natasha pulled her dress off as Stewart
removed his shirt. Pleased he was not quite ready, she ran down
the slope ahead of him. She tripped in her haste, and was tumbling
to the ground when something touched her foot. She extended her
hand to cushion the landing and protect her upper body. Hands
appeared by her side. Stewart’s hands. He was falling as well.
His chest touched her back, but she didn’t notice his weight on her
body. She couldn’t see anything but the slope of the earth. She
had to get off her stomach. Natasha manoeuvred herself onto her
back. Stewart’s face hovered directly above her. Her eyes locked
on his sparkling blue eyes. She was shocked by the predicament
she found herself in. His hands were close to her waist without
touching her. Just when she thought things couldn’t get worse,
Goldie’s snoopy little nose appeared, sniffing between her face
and Stewart’s.
It would be difficult for Stewart to move without touching her. The
dog looked at her and then licked Stewart’s cheek. Natasha
giggled.
“Stop. Go lay down,” he begged the dog.
With one final motion, Goldie extended her tongue across
Stewart’s cheek and onto his lips. Stewart closed his eyes and
scrunched his nose. Natasha’s giggle intensified. The dog backed
away, settling on the grass beside them. The dog placed her chin
comfortably on her paws and sighed in contentment.
“How disgusting,” Stewart groaned, unable to wipe his face. “I have
been kissed by a dog.”
“I’ve also been kissed by your dog,” Natasha reminded him as she
looked into his eyes.
“You must put me out of my misery and assure me you’re not hurt,”
he pleaded.
“I’m terribly embarrassed, but not hurt.”
“You say you’re embarrassed, yet I believe you tripped me to avoid
a second loss. You intentionally put your foot out.”
About to defend herself, she saw the slight smirk on Stewart’s face.
He was teasing.
“There’d be no need for such an attempt, sir. I would have won that
race. You would have been left in a cloud of dust.”
Stewart’s face lit up. “What an impressive, optimistic opinion. The
truth shall be revealed shortly, I’m certain. I have no doubt I will
defeat you the next time,” he responded with certainty.
Stewart’s eyes sparkled. 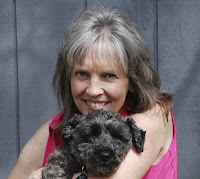 link to my author page on the Muse site

I'd love to hear from you!

Posted by Heather Greenis at 1:00 AM