Portrait of an Author: Interview with Rick Stanton

Rick: Oh, hi! Come on in. Careful going past those canvases. They’re not quite dry. Cadmium takes forever. Someone toss me a rag. Thanks! (Wipes hands.) Sorry about the smell of mineral spirits and oil paint. If you like, I’ll open a window… There. That’s better. Now all we need is some absinthe for atmosphere.

Anyway, I've a special guest today. Meet Pamela Turner, the author who plunged me into that dark, Gothic nightmare she calls “Family Tradition.” Somehow, I managed to convince her to stop by and tell us a little about herself, why she chose me to be in one of her stories, and anything else I can think of.

Pam: Thank you for having me here. Be aware I might plead the Fifth on some of those questions.

Rick: You wish. Okay, so why put me, a struggling artist, in a situation like that? I mean, here I have enough trouble getting commissions or finding galleries to display my work, and you decide to hook me up with this mysterious woman who won’t show her face. In other words, what inspired your story?

Pam: First, let’s clear up any misconception I hate artists. I don’t. Many of my friends are artists, and I’ve done some exhibits myself. Granted, they were non-juried and student shows, nothing big, but ever since I was a child, I wanted to be an artist, particularly an animator.

Anyway, the story was inspired by a picture of a woman concealing her face with an umbrella. It started out as a flash fiction piece about a vampire and an artist. Not that I’m saying the story remained the same after I expanded and rewrote it. But pictures are often a source of inspiration for me, as well as “What if?” situations.

Rick: What are your artistic influences? I mean, you’ve got me painting dark subject matter like vampires and such. That whole “Denizens of the Dark” thing.

Pam: Caspar David Friedrich and Edvard Munch come to mind. Kathe Kollwitz and Narumi Kakinouchi. I wanted you to be more of a traditional artist despite the prevalence of digital art. Besides, Elizabeth wouldn’t have hired you otherwise.

Rick: Am I based on any one particular artist or am I a completely new character?

Pam: You’re based on a couple of artists I know, but your personality and looks are from my imagination. Actually, you have something in common with another artist from a vampire story. (Although I must emphasize “Family Tradition” isn’t about vampires.) I’ve a character, David, who inks drawings inspired by Friedrich.

Rick: “Family Tradition” mentions a dark time in history. Were you worried how people might respond?

Pam: My concern about adding that element was would readers consider it too gratuitous or convenient? I’m sure there are people who would rather forget such evil exists, and that humans can display untoward acts of cruelty. We’d like to believe evil is punished, but that’s not always true.

Rick: Fair enough. But I gotta tell you, Elizabeth creeped me out. Not that I want to give away the ending, but you know what they say about desperate times.

Pam: Both you and Elizabeth were forced into situations you couldn’t control, although I suspect she’s accepted her fate.

Rick: I remember you telling me you were thinking of writing a story from Elizabeth’s point of view, something that takes place in her past and how it affected her and her family.

Pam: I still might. Of course, you wouldn’t be in it. Would that bother you?

Rick: Not at all. To be honest, I’d like to learn more about Elizabeth’s past. Given you write such dark, obsessive characters, I wonder, is she based on yourself?

Pam: Can I help it if my characters are weird, dark, and obsessive? I like this quote about real characters versus reel ones. Readers want to read about people who dare to act like they want to, but can’t, for whatever reason. And I’ve always been drawn to characters who live on the fringe of society.

Rick: Sounds good. Thanks for sharing your insights. 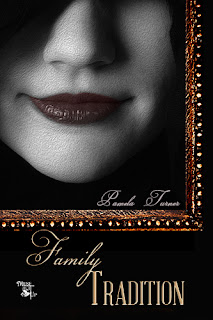 Blurb:
Rick Stanton needs a commission. He faces eviction from his apartment and his latest project is on hiatus. Worse, his muse refuses to cooperate. A recent letter may contain the inspiration he needs. Inside is the photograph of a mysterious woman, her face hidden by an umbrella. But there's no identification, no way for him to contact her. A month later, another envelope arrives, this time with a phone number. Realizing this may be his last chance, Rick calls her. The woman introduces herself as Elizabeth and tells him she wants him to paint her portrait.

Rick agrees, only to learn there are conditions. Elizabeth is a recluse who lives with her two servants in a Victorian manor. She never allows her face to be seen. Not only must he stay at Elizabeth's residence while painting her, he can't leave, nor can he ever tell anyone about the portrait.

Sensing something isn't right, Rick is even more disturbed by the sinister undercurrent beneath the household's genteel facade. It's somehow connected to the family portraits hanging in Elizabeth's living room. Could they be haunted? And why doesn't Elizabeth's housekeeper want Rick to finish the painting?

After writing poetry and short stories, she worked as a freelance magazine writer for two local publications. After two years of interviewing people, she decided to return to writing fiction. In 2004, she won second place in The Writers Place Short/Teleplay screenplay competition for "Cemetery." She followed this in 2011 with the paranormal/urban fantasy Death Sword, published by Lyrical Press.

Originally from Wisconsin, Pam moved to Kentucky where the bugs are bigger and allergies aren't an option but the law. She lives with her family and aforementioned feline. Besides writing, she enjoys reading, photography, playing chess (although she's lousy at the game), physics, aviation, the Tarot, and cemeteries.

You can find her at her site, Haunted Dreams, Dark Destinies

Posted by PamelaTurner at 12:09 PM

Well that was fun. Being given heck by your character.

The cover is one of the best I've ever seen. Very nice.

I thought this a unique twist. I've never seen a character interview the author before. Great Job.

Joylene, so glad you like the cover. Delilah does some great work.

Liza, I can't take credit for that. It was my publisher, Lea, who sparked the idea for her authors. :-)