I’m excited to share some tips about scene revision. To be honest with you, I think my writing group is sick and tired of me writing comments on their manuscripts like “What is the purpose of this scene?” and “I think this scene serves the same purpose as another scene in the story.” The truth is I’m a plot-orientated writer, so notes about scenes come naturally to me.

When revising for plot, I find a manageable approach is to look at the story scene by scene. The basic definition of a scene is an event—or a series of closely related events—that takes places in the same place and time. Each scene will have its own mini story arc (with rising action and a small climax) that contributes to the greater story arc.

Once you have a good draft of your story, you’ll want to evaluate each scene. Some writers find it helpful to write out a very basic description of all scenes as they appear in the book. You might try using one sticky note per scene, so you can move them around if you want (or you can use one of those fancy computer programs that moves the scenes around for you).

In addition to a basic description, I like to add how to scene contributes to the greater story. You want every scene to do one of two things: move the plot forward or help developing a character. It’s okay if a scene does both these things, and many should do both these things.

Most often a scene that moves plot forward will come in the form of bad stuff happening and your characters reacting to the bad stuff (note that the way your characters react will almost always contribute to character development as well). As you want each scene to build, you want the greater story arc to build as well, so you’ll probably start with the smaller bad stuff and work up to the worst bad stuff.

But you don’t want to just have scene after scene of bad stuff happening because that can actually bore your readers after awhile. You need to have some balance. Character building scenes are great for a break. Maybe there’s a quiet moment (or an exciting moment) between two characters that reveals an important characteristic about one of them, or even better reveals something about both characters.

A good example of a character building scene that doesn’t necessarily contribute to plot is the troll scene in Harry Potter and the Sorcerer’s Stone. Harry and Ron unknowingly lock a troll in the girl’s bathroom with Hermione. Then all three of them work together to defeat the troll. When Professor McGonagall catches them, Hermione lies to keep Harry and Ron from getting in trouble. The plot of the book would easily remain intact without this scene, but it’s important because this is the moment where Hermione goes from annoying classmate to friend with the boys.

Now that you’ve got your list of scenes, jot a note about how each moves the plot forward or what character trait it develops (or both if applicable). And here comes the hard part. I know, you’re saying, “Wait! All that evaluating of the scenes wasn’t the hard part!” Nope, the hard part is being brutally honest about each scene.

If you have a scene that doesn’t move the plot forward or contribute to character development, it should be cut or rewritten to contribute one of these points. Also, if you have two scenes (or three or more) that contribute the same thing, you need to cut all but one of the scenes or somehow combine them.

One exception to this is if a scene is what I like to call a topper. A topper scene may have a very similar purpose as another scene, but it takes that to a whole new level. I’ll use a scene from my book Elixir Bound to demonstrate this point. The climax consists of Katora, the main character, deciding whether or not she will become guardian of a secret healing Elixir. Once she makes the decision (no spoilers here!), the next thing that happens tests Katora in her decision. She almost has to decide all over again whether or not to stick with her original decision. So there’s not too much new information being revealed, but more of a solidification of her choice.
Now I’m off to go bug my critique partners about their own scenes! Good luck in revising yours!

About the Author
Katie began writing after her 16-year-old sister unexpectedly passed away. Writing was a way to help her sister live on in the pages of a story. Her debut YA fantasy Elixir Bound is about Katora Kase who must decide if she will become guardian of a secret healing Elixir and bind herself to its magic. It is available from the MuseItUp bookstore, Amazon, Barnes and Noble, and other ebook retailers. Her picture book app The Bedtime Knight released earlier this month from MeeGenius. For more about Katie, check out her website www.katielcarroll.com. 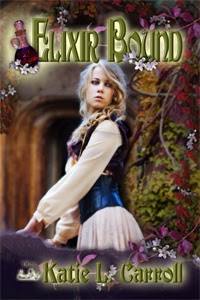 Posted by MuseItUp Publishing at 7:51 AM

I agree about too many bad things happening. I get turned off if there is no respite.

Hi, Suzanne! I definitely find a change in pace necessary during a story. All the scenes shouldn't have one emotional feel to them.

A very informative, helpful post- made even better by the fact that you referenced Harry Potter, lol!

Great post, Katie, though I'm left feeling a bit winded at the idea of all that plotting. I think I do most of it naturally as I write. Thank goodness, but otherwise writing would feel too much like hard work. Lol. I know you really helped me define a couple scenes in Beware of the White. You really know your stuff.

Thank you Katie for a very interesting and informative post. I was in the process of editing a wip...I now see that I have to start all over again!

Interesting article. I'll have to look at my scenes a bit closer now.

This is really good, Katie. I'll be sharing for sure. I had a logish scene in my first book that lovely Rosalie said was a beautifully written scene, very sweet, but really didn't move the story along. I gulped looked at it. LOL It was a great scene, but she was right, so I smushed it down to way smaller and the book ended up being a tighter read. Your CPs are lucky to have you.

Leandra, everything is better when HP is referenced! :)

Thanks, Kai. I do a lot of plotting in my head as well while I'm drafting, but writing out each scene during the revision process can be a really helpful way to visualize the whole plot. It's not necessarily a tool for everyone to use, though.

Hi, Marie! I would say you're welcome, but maybe it's not so welcome advice if you have to start over. ;)

Thanks for stopping by, Beverly.

Hi, Marsha! Rosalie is great (she was my content editor for Elixir Bound). It's so hard to cut beautiful writing, but it often makes for a tighter story.