Isn’t it splendid when a wonderful protagonist comes along? He’s (in the case of my protagonist: Sean Donovan) forty, fit and feisty. Sure, there are big gaps in his conscience, but he’s working on it. Ditto for my female protagonist, Beth. She’s attractive, fit and smart as a whip. There is nothing picaresque about either one, so let’s write three hundred straight pages with these two characters in every paragraph. Lots of ‘he said, she said.’ Wouldn’t that be brilliant?
No.
We, as readers, want more. We want to see what’s swirling around Sean and Beth. It’s like the old joke about the narcissist: “Yes, I am great. But enough about me. Why don’t you tell how brilliant I am?” We need to find out a bit about the people who stroll into and out of Sean and Beth’s lives.
And it’s not just a plot contrivance. We really can come to care about these secondary characters. In Three Wrongs, my character Sean needs information, so he walks into the Canadian embassy in London. Over the course of a page or two he has a chat with this vivacious Communications Officer, who can flirt, withhold information and discretely share (sort of) restricted information. That’s all we get from her for the remainder of the novel.
But we remember her.
We want to know more about Beth and wish she hadn’t left us on Page 90. So it is very exciting when Beth returns—now promoted to Female Protagonist—in Book 2: AMACAT. But in Book 1, Beth serves very important roles. As embassy staff, she reveals information that pushes the plot along. She reminds Sean that he’s a man, one who can have feelings and isn’t just a thief for hire, he’s a guy. And she’s witty. We want to know more about her.
I present another secondary character: Madeleine, who is Sean’s sister. Madeleine’s purpose is to bring out much of Sean’s background: his youth, how he came to become a bad-ass, where his unique skillset came from. And she’s funny and brings out some quirky knowledge about the city of Montreal. Madeleine comes back in Book 2 as well, but she remains a secondary character. We still need to invest in her. We still want to learn more about her, discover if she can eventually find a relationship worth keeping. We like her, so she can certainly come along for the ride.
It’s said that, beginning with Page One, the writer creates a world, using his or her rules to dictate how this new, fresh world will spin. It will be a less-interesting world in the absence of any one of plot, setting, exposition, dialogue, primary characters, atmosphere and, yes, the development of secondary characters. The temptation, if you have an awesome plot, might be to stint on dialogue. That would be a mistake. Similarly, just because you have this amazing protagonist, that is no reason to build stick figures and call them ‘secondary characters. No. Don’t miss an opportunity to flesh them out.
I once wrote a book where I introduced these two little girls, secondary characters, on page 80. By the end of the novel, they had become primary characters and I had to re-write the entire novel. It wouldn’t have happened if I’d relegated them to rough sketches. As soon as I tried to catch more than a glimpse of them, I began to see their value. To be sure, not all secondary characters can or will become protagonists.
But some do.
At the end of the day, do every aspect of writing to the best of your ability. How well you do that could spell the difference between a good novel and a great one. It’s true about dialogue, and it’s true about each and every character you introduce. You’re the writer. It’s your world, your rules. Make it a rule to bring every character to life. They will thank you. So will the reader. 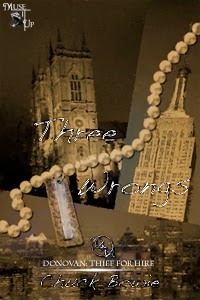 Chuck Bowie graduated from the University of New Brunswick in Canada with a Bachelor Degree in Science. He still lives in on the East Coast of Canada, a few hours north of Maine. Growing up as an air force brat, his writing is influenced by the study of human nature and how people behave, habits he picked up as his family moved nineteen times in his first twenty one years. Chuck loves food, wine, music and travel and all play a role in his work.
His writing will often draw upon elements of these experiences to round out his characters and plotlines. Chuck is involved in the world of music, supporting local musicians, occasionally playing with them and always celebrating their successes. Because he enjoys venting as much as the next fellow, Chuck will at times share his thoughts with a brief essay, some of which can be found on his website. http://chuckbowie.ca
He is working through the second novel in the suspense-thriller series: Donovan: Thief For Hire. It is titled AMACAT, an acronym for the three elements of the plot.
Chuck is married, with two adult musician sons. He and his wife Lois live in Fredericton, New Brunswick.
EMAIL     WEBSITE

Posted by MuseItUp Publishing at 8:09 AM