Janus is the Roman god of beginnings, passages, and changes. Even today, he represents the new year with the month named January after him. A two-headed diety, Janus looks back in remembrance and forward in anticipation of the new. 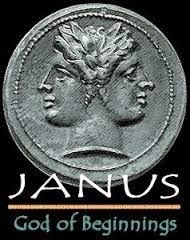 In Roman times, the Winter solstice was thought to occur on December 25. Note that Christians co-opted this date to allow the pagan Solstice celebration to continue, but calling it the date of Jesus Christ's birth. Pretty sure those shepherds weren't watching their flocks at night in December. This was a common practice during the early spread of Christianity. It was far easier to convert the pagans, if their holidays were still observed, even under a different title.

January 1 was new year day: the day was consecrated to Janus since it was the first of the new year and of the month of Janus. The Romans believed the beginning of anything was an omen for the whole. Thus on that day it was customary to exchange cheerful words of good wishes. Happy New Year is a very ancient greeting. It's not just a salutation but a sincere wish of good wishes in the future.

In 2013, I had both good and bad events as does everyone. But the good generally outweigh the bad. My husband and I went on a European tour starting in Rome and ending in London. We'd been to England before, but not the rest of Europe. We barely scratched the surface, so are planning our next trip. This time we'll spend more time in Paris and London.

More recently, I've begun the process of creating audio book editions as well. My first audio book, "Tales of a Texas Boy," made a 2013 publication date by one day.

What do I look forward to for the future? Well, that Paris/London trip for sure. More audio book publications are definitely in the works with my MuseItUp mystery, "Missing, Assumed Dead," in production right now.

New writing has been put aside while I handle the backlog of publications and hit the marketing end of the business. I do have some thoughts on another book in the Witches of Galdorheim series, but something else might send me in another direction entirely.

May the force be with you. Peace be. Live long and prosper. Have a great New Year!
Posted by Cellophane Queen at 12:00 AM