How much do you really know about your neighbors?

My neighbors are awful. They shun us for reasons unknown. Ignore my daughter. Toss squirrel road-kill into my yard. Maybe even steal things at times. Unproven, but doubts linger.

Rather than start a neighborhood war, I decided to write a book about it. Much more cathartic and, you know, safer.

Neighborhood Watch is a tale of suburbia gone mad. A tip of the hat to great past paranoid, supernatural thrillers such as The Stepford Wives and Rosemary's Baby. The horror is subtle, but I hope, creepy. Like ice-picks tap-tap-tapping at your spine. 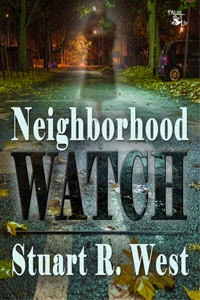 You know the worst of it? My wife's mad at me about this book. It's loosely based on our marriage. We're, for better or worse, the main two characters. Doghouse is putting it lightly.

But the tale had to be told.

These neighbors are real. Most of the characters are based upon people in the neighborhood, alive and dead.

Unlike the lead character, I haven't suffered a mental breakdown in the past. Been on the precipice at times (mostly due to the shenanigans of my daughter), but I've held a tenuous touch onto the cliff of sanity. Hope to keep it that way.

The scariest thing, though, is our basement. What lurks down there. The answer's in the book.

Shut the blinds, forget about the cold weather outside. Warm to thrills and embrace the chills.