I believe in keeping busy. Idle hands and mind are a sure path to an early demise. To that end I’ve always given my all to a favorite activity. In my youth, I ran track, setting a Louisiana state record in the long jump. To this day I still do three or four miles five times a week. I grew up with Elvis and the Beatles and spent twenty-three years in the Navy, where my claim to fame is surviving being left on the bridge of a submerging submarine. That experience set forever the perspective of what was important in life. I’ve been writing and raising tropical fish on and off since I was nine. I still have a collection of stories from the fifth grade. The centerpiece is a sequel to HG Wells’ War of the Worlds, complete with illustrations of US Marines doing to the Martians what the British army couldn’t. One day I may revisit that story along with the sequel to The Time Machine l lost during a move.

Last fall, I met Anne Rice and learned she grew up in the same neighborhood where my mom’s side of the family lived.
Another project is writing screenplays for my books. The Progeny of Evolution series has a one hour TV pilot making the rounds. The seven books have many seasons worth of episodes. The paranormal of True Blood meets the generational intrigue of Dallas with a bit of Wellsian Sci-fi and Orwellian Dystopia thrown in.

What motivated you to become an author?

From the third grade I had all these stories buzzing in my head and struggling to get out. Over the years, the urge to write rose and fell, depending on what else was going on. When I fully retired in the fall of 2007, I cast about for something to do. For two years I tried different things, but nothing fit. Then, with the arrival of an abysmal fall TV line-up I decided to give writing a try. After a couple of false starts, I entered and won a short story contest with a little ditty titled The Girl in the Library (TGITL), the hook of which is the vampire stalking the redhead he spotted in the library is a werewolf doing the same to him. The short grew into The Other Kind, Book One of the series.

What is the greatest joy of writing for you?

Discovering where my muse is leading me. In other words, getting to the point where the story falls into place.

Everything. As my base developed I drew encouragement from their support to weather the dry spells of writer’s block and come up with new ideas.

Who are your favorite authors?

There are many. HG Wells, George Orwell, Harold Robbins, Michael Crichton are prominent among them.

What three words describe you as a person?

What three words describe you as a writer?

When you're not writing, how do you spend your time?

How do you discover the e books you read?

Through recommendations from wife and other friends.

Do you remember the first story you ever wrote?

Yes, Battleground, inspired by a war movie The Halls of Montezuma. I was eight.

The fairy tale Thumbelina made me think of Sci-fi themes about worlds of small creatures interacting with us, or us running across civilizations of larger people.

What do you read for pleasure?

Not much. Mainly texts on writing and screenplays.

A lap top dominates the topography with a printer off to one side. My wife Cynthia smiles from a picture among others of my grandkids and one of me with Richard Simmons. All are lined up across the back edge. On overflowing in-box, untouched in months and filled with nothing important eyes me with reproach from the other side of the laptop.

Where did you grow up, and how did this influence your writing?

I grew up in Metairie, Louisiana, a suburb of New Orleans. I think the shadow of Crescent City culture falls across everything I’ve written, even the sci-fi.

They come from most anywhere. Amy Adams inspired the character for TGITL, which started the chain reaction resulting in seven books, each of which grew from the other. Interest in the process of substance abuse rehabilitation in confluence with TGITL’s strong willed daughter, Cassie White, inspired The Daughter.

Let our readers know why your book is different from others in the same genre:

Ten Reasons Why Progeny of Evolution Books Are Different:

1. My werewolves are lycans and come in more than 50 shades.
2. My vampires don't sparkle.
3. Despite their powerful libidos, my vampires and lycans (The Other Kind) have a deep spiritual side.
4. I built a world from scratch for The Other Kind, a world where they could plausibly live among us. Your next door neighbor could be one.
5. The Other Kind choose mates who are beautiful and sexy only for them, intelligent creatures who set their lovers' hearts and parts afire.
6. My stories are well-written, full of action and excitement, set in a world that is easy to believe.
7. The Other Kind come from all walks of life—college professors, astronauts, corporate CEOs, soldiers, explorers, even attorneys, all with extraordinary powers.
8. The Other Kind can be dark and edgy, but have a loving side and fierce family devotion. Over three generations, they network, form corporations, seek redemption, and battle persecution.
9. My characters evolve from Creation’s vilest expression toward becoming the noblest. Before the adventure is over, they explore space, colonize Mars, travel in time, and learn their place in God’s plan.
10. While they’re erotic, my stories have character development, a plot, some deep thought, and most important, romantic love with a happy ending.

Follow the publisher’s submission guidelines to the letter. Try to learn from each event in your writing adventure, both good and bad. 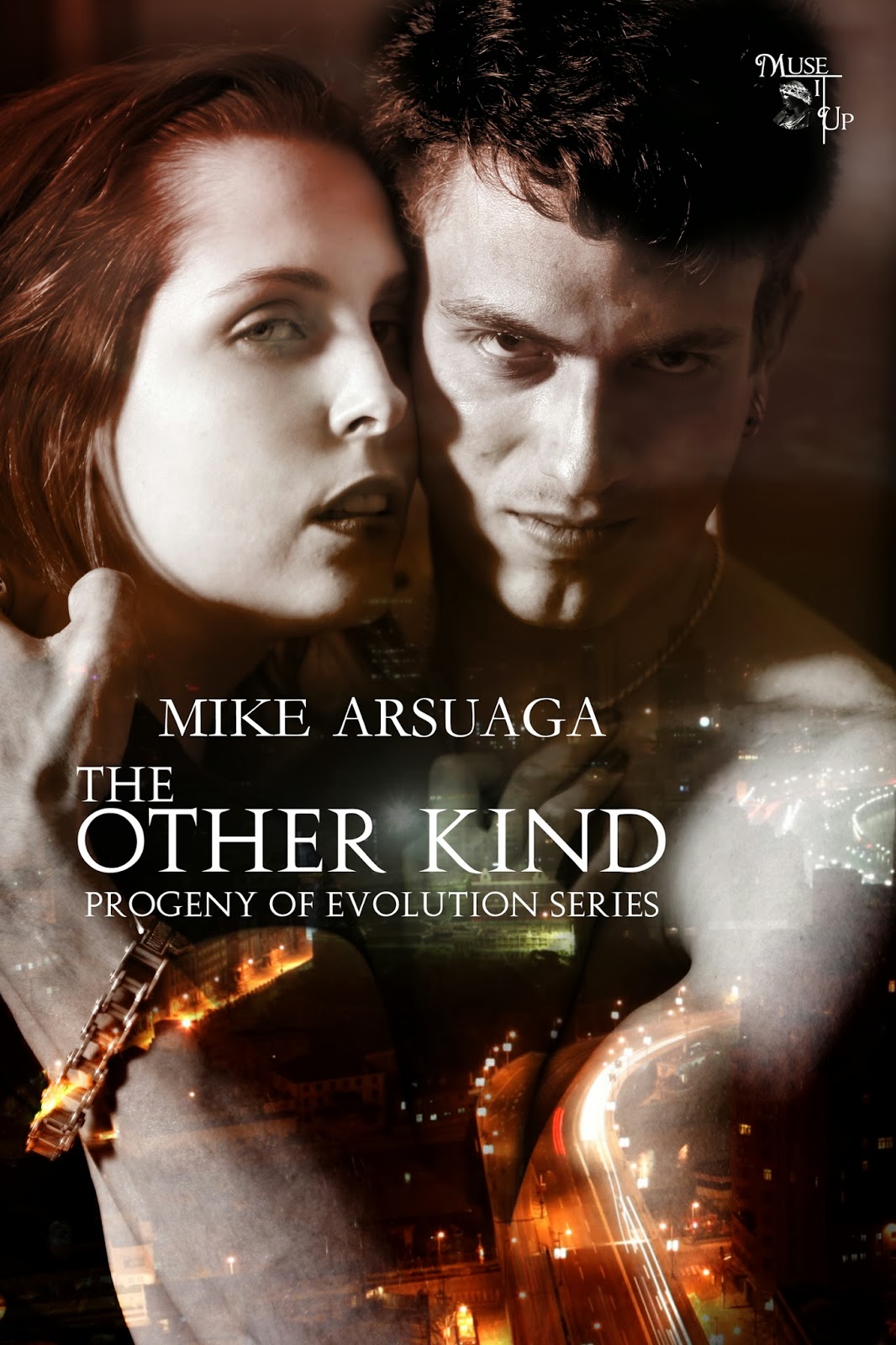 Excerpt from
The Other Kind

Setting the stage: Vampire Jim returned home after rescuing lycan Sam (Samantha) from police custody. With them is human attorney Oscar Young. Waiting at the apartment are young lycan Cynthia and elder vampire Ed, the rest of the support group. Oscar had just answered Jim's question regarding the rules of attorney client privilege. Jim unfolds the scene:

“Am I to understand what we tell you or show you will remain privileged and you can’t disclose it?” I asked.
“That’s correct,” he answered. “I may decline to represent you further based on the information or evidence you provide, but I cannot reveal what you tell me.”
“Even if we are what they say we are?”
Oscar chuckled. “Yes, Doctor White, even if you're a pack of werewolves.”
Encouraged by his answer I morphed, with fangs, pallor and red eyes. Oscar instinctively jumped back but recovered and said with another chuckle. “What an excellent effect. How did you do it?”
By then I returned to human form. “You don’t understand. I really am a vampire,” I said.
Oscar stood and sternly replied, “Doctor White, if you think this is all a joke perhaps you should seek other representation.” He retrieved his briefcase preparing to leave.
A vampire morph is not dramatic. Most of it happens internally, expanding joints and modest bone growth. Except for the fangs I could pass for large pale man with a bad hangover. We needed a more dramatic demonstration.
I turned to Cynthia. “Show him what you can do.”
“Do I have to?” she complained. “This is a brand new outfit.”
“Please, it’s important.” Sam added. “Besides, I sewed in Velcro morph seams.”
Cynthia stood and stepped to the middle of the room. She faced Oscar who paused at the door. Shimmying out of her panties, she kicked them to the side with a last flick of a bare foot. Stretchy lingerie fabrics didn’t tear. Because a lycan grew when morphing, most underwear bound them painfully. Ed’s eyes locked onto the sexually aromatic wrinkle of white material shimmering at her feet. She stood erect with legs apart and hands on hips. As it molded to her butt, the black miniskirt sparkled with sequins, round like half of a disco ball. I surveyed the pleasingly dramatic arching cleft of her spine under the white blouse.
“Okay,” she said. “You asked for it.”
With a ripping of Velcro, the garments separated and fell away. She expanded in all directions nearly touching the ceiling, seeming to fill the room. Arms and legs elongated as if made of modeling clay. A curved fanged snout grew out of the face some said could launch a thousand ships. Upon completing the morph she peered down on Oscar. Casual predation emanated from the height of coal black eyes.
“Convinced now?” I asked above the sound of Cynthia’s low growl.
Bug-eyed, Oscar slowly retook his seat.

Discover Mike Arsuaga and his Progeny of Evolution series.
Posted by MuseItUp Publishing at 12:39 PM