MuseItUp Celebrates July 1st and July 4th for Canada and the United States!! HAPPY BIRTHDAY TO ALL!!! 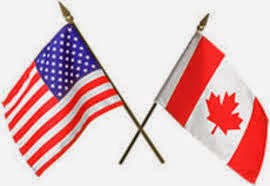 Happy First of July to all my Canadian friends.Being an American I have only celebrated July 4th and I don't know anything about Canada's birthday, but I do know a lot about July 4th. From the time I was a little girl July 4th meant getting together with family and family friends and having a big barbecue. We had hot dogs and hamburgers cooked on the grill by the men who started the grills with lots of charcoal and the smell of lighter fluid was in the air too. The coals would go up with a huge burst of flame and then when they got to the stage where they were only embers the food would go on. We kids would play whatever games we had including having water fights with water pistols, not the high tech kind they have now, but little ones that just gave a little squirt of water. Or we would run around through the sprinklers or just run around. The grown ups were sitting around and talking and of course they were preparing the food. The men would put the hot dogs and hamburgers on the grill and the women would start bringing out the food. In my family there was always potato salad, sometimes several kinds, coleslaw, beans, corn on the cob and salad. Then there was dessert and it was always pies and cakes and cookies and anything anyone decided to bake. Of course there was always watermelon which we would eat off the rinds spitting out the seeds, because they didn't come seedless then.The best part was when we all got a sparkler. The grown ups would light them and we would hold them until they went out.

These 4th of July parties were the highlight of the summer when I was younger, but then I went to camp and we celebrated in a different way. There were usually sparklers and a special cookout, but I missed my family celebrations. As an adult with children we continued the tradition and got together at one or the other's big backyard and had the whole experience. Later when we moved to Long Island we used to go to the beach and have dinner at a place where we could get the hot dogs and hamburgers. Then we went to the beach and watched the fireworks there.However, now we celebrate in a whole other way.

With my immediate family so small we go somewhere else to a big country club and there we have a very sumptuous buffet dinner with every food imaginable and all you can eat. Then they bring out these amazing desserts including a chocolate fountain and a sundae bar. The best is the fireworks display where you can stand out in the open and the fireworks are so close they are right over your head.I have written about this in more detail on my blog. Just look for the 4th of July post. Afterward we usually go home and watch the Macy's fireworks on TV. Outside our windows we can hear the fireworks going off for hours, because in Connecticut fireworks are legal. They sell them at grocery stores and little kiosks set up on the roadsides. They are even at places like gas stations and near Dairy Queens. You can look out and see them in the distance from people who are having their own private displays.

I am looking forward to learning how you Canadians celebrate your holiday.

Posted by Barbara Ehrentreu at 4:40 AM