The Amazing Worlds of John B. Rosenman...

John B. Rosenman recently retired as an English professor at Norfolk State University where he designed and taught a course in how to write Science fiction and Fantasy.  He is a former Chairman of the Board of the Horror Writers Association and has published approximately 350 stories in places such as Weird Tales, Whitley Strieber's Aliens, Fangoria, Galaxy, The Age of Wonders, and the Hot Blood anthology series. 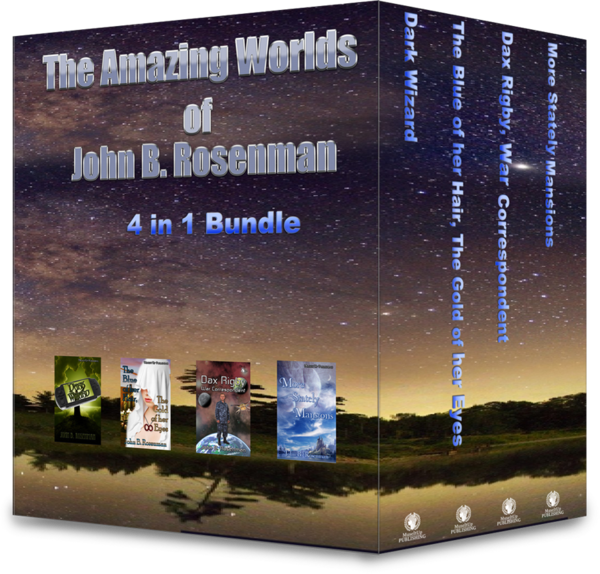 John's newest release is a 4 in 1 Romance & Sci-Fi Bundle with super savings...

592 pages to fill your ereader with.

Dark Wizard—Paranormal Romance
Kan not only has complete amnesia but superhuman strength and the ability to bring back the dead. Then a beautiful girl complicates things even more. When Kan learns his identity, he finds he is faced with a deadly evil and a cosmic mission.

The Blue of her Hair, The Gold of her Eyes—Paranormal Fantasy
Rachel's mysterious disease causes everyone, including her husband, to fear and reject her. Then her body starts to change in amazing ways.

More Stately Mansions—Sci-Fi
Captain Temple leads an expedition to K22, an exotic, tropical planet, hoping to create a great new market for the Merchants Guild. But why are the beautiful cities empty? Where are the inhabitants, and what terrible secret does this world conceal?