Here's to another quiet, relaxing, and restful Sunday and a visit with our Musing Musers.

What's this week's topic? Well, it's one I opened with years ago when Sunday Musings was a magazine column. It's a topic that, at the time and probably stil, hit a few hot buttons.

To overly generalize an amateur is to say they are someone who lacks skill, experience, and are not paid for pursuing a hobby.  A professional can be generalized as someone skilled, experienced, and is being paid for pursuing a career.  However; everyone is capable of an amateur attitude and behaviour just as we are all capable of handling ourselves in a professional manner.

For the record, I didn't ask...hobbist. This was another sore point twenty odd years ago. Ready for some writers' insight? So am I...let's get musing.

I was going to write a long post for this titled "The Seven Deadly Sins," but then I thought about it and decided it all boiled down to one thing: Attitude. If you have an amateurish attitude about writing and publishing, that's what you are: an amateur writer. Amateur writers don't write, don't edit, don't listen to criticism, give up, and take their ability for granted. Why? Because they don't see themselves as a professional and therefore don't strive to act like a professional.

A professional writer writes when they don't feel like it (though breaks are allowed), they edit, they listen to criticism, they get back in the saddle, and they are grateful (if not fully aware) of their ability. They treat themselves like a professional, therefore...

...am I over-simplifying things?

This is a good question that I want to put a lot more thought into, but my first thought was attitude. Clothes make the man? No. Look at your heart first.

It’s about standards in the end. An amateur does it literally for the love of it while a professional represents themselves publicly as good at what they do and demands payment for it. Either can be “amateurish” in approach. If any of you are involved, as I am, in voluntary work, you will know that, these days, most charities require their volunteers to be trained and kept up to requirements, ie “volunteers but not amateurs”. Neither would we have malpractice suits against paid practitioners in various “professions” if at least some weren’t negligent or incompetent some of the time. I’m not sure what to say of the writing world. Self-regulating to an extent, but anyone can publish anything within reason these days, and the standard does vary! I certainly don't earn much from it, but like to think that I bring professional standards to what I do produce, as I'm sure all my Muser colleagues do too.

The first thought that hit me when I saw the topic of professional vs amateurish is how professional authors react to bad reviews. I think we all know we can't make everyone happy with our stories, but we do submit books which we have worked on and done our best. One person out of 100 may not like that story. Unfortunately that is the one review we focus on and can't forget. However, the pro will let it go without comment. The amateur will respond with snarky comments which may inflame another comment from the reviewer and the two commence to say things that should not be said and especially recorded forever in an online comment section. The pro has learned to let the comments slide off her "tough" skin and appreciate the great reviews even more.

One definition of an amateur is someone who occupies his/her time studying or participating in an activity such as a sport as a pastime, who does not earn money from it.

Another definition is someone, who studies a science such as astronomy as a hobby not a profession.

With regards to the arts I would describe an amateur artist as one enjoys painting for its own sake, and amateur authors as those who enjoy writing, whether they express themselves in a diary or write fiction, non- fiction or poetry for pleasure. However, some artists and authors serve long apprenticeships learning their craft with the intention of selling their paintings or being published.

A professional is, for example, an author whose work has reached a publishable standard and is paid for it.

The Fire King by Kevin Hopson 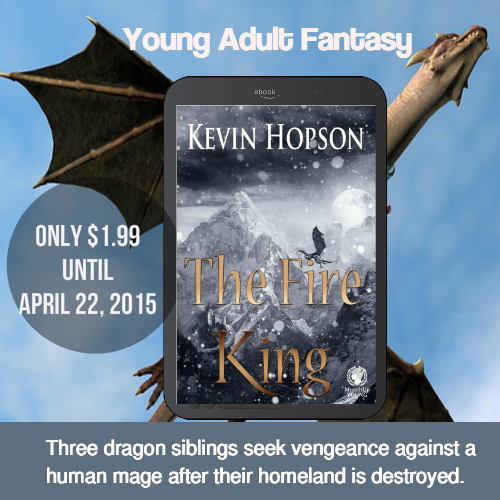 The planet Oabrora faces a perpetual winter after a human mage, Vico, causes all of the volcanos in the dragon homeland of Jifihx to erupt. Three dragon siblings—Mianth, Tulvir, and Hirador—survive the blast and set out on a journey to bring Vico to justice. However, when they cross paths with two humans, they discover a far worse enemy than Vico.

HOT OFF THE PRESS!...and still at its pre-order special until tomorrow.


The Fire King by Kevin Hopson

Hopefully, this isn't the weather you're experiencing, but today we're musing on how to write a foggy scene without telling you it's foggy.

Have a fun week!

It was difficult to see my hand in front of my face, let alone the traffic signals. Why was I driving on such a morning? Oh yes, work. I had to get to work. So, as I puttered along, I prayed that I wouldn't miss a red light, and if I did, there wouldn't be someone in the intersection.

Oh my. Didn't see that light. But then again, neither did the cop beside me.​

The ship creaked as it changed course, heading straight for the ragged, jagged rocks which would shortly tear its heart out. From the cliff path, I could just make out the diffuse light from its lanterns, glowing eerily in the sea mist.

It didn’t seem possible that the decoy lights on the beach had been sufficiently bright to slice through the thick, grey blanket that enveloped the cove and everyone in it. Had the merchant ship been further out to sea, it would have passed by unaware of the treachery that awaited it and its crew, but as so often happened on nights such as these, the boat hugged the coast, and it would soon pay the price.

I couldn’t see the men and women who were poised on the beach, ready to salvage the cargo and to deal with any survivors, but I knew that almost every villager would be there, somewhere. Tiny noises came from all parts of the cove confirming their presence - a muffled cough, a whispered command, the soft footfall of someone clambering over rock down by the waves. But everyone was invisible, concealed in the murkiness which would hide their deeds tonight.

Beside me, my mother tensed as a cry rang out through the gloom, followed by the thunderous crash of splintering wood. The ship struck the rocky pinnacles and the lanterns on the mast slowly sank towards the sea, as the vessel listed. The noise was all the more alarming because it was so close, yet the ship was completely obscured behind the impenetrable greyness.

On deck, someone was frantically ringing a bell as men screamed and jumped into the freezing sea. But still I could see nothing, even the lanterns on the masts had been extinguished.

‘’Tis begun, Mary,’ said my mother, ‘wait here ‘til the goods come ashore, then carry as much as you can. You’ll have a full belly before you sleep tonight, if all goes well.’ And with that, she melted into the mist.

‘But Ma, how long will I have to wait?’ I called after her.

Her ghostly voice floated out of the gloom, ‘As long as it takes.’

But I needn’t have worried about a signal. The unmistakeable sounds of merciless slaughter echoed round the cove and I cowered in the shroud of obscurity until the piercing screams and guttural voices were silenced under the waves, in explosions of bubbles.

When I could only hear familiar voices, I knew it was time to help.

I shivered in the damp, clamminess of the air.

The open carriage windows let intense cold and damp into the hired vehicle. Merril shook her head hoping to clear her vision, but that made matters worse. If it weren't that the horse's clopping on the soaking cobbles hinted at a coachman, she could be alone on Castle Hill Wynd. She could be alone in the city dragging her way through a bowl of soup; black, glutinous soup with odd floating lumps. Auld Reekie's hundreds of small cooking fires added their smoke to the miasma and she sank back against the carriage swabs. She sighed.  Lucky stars? Where were they when a girl needed light?