Hey gang. Stuart R. West here, author of the new book, Zombie Rapture. Now before you run to the hills trying to avoid the dreaded "Z" word, let me say a few quick things. It's not really a zombie book, not in the traditional sense. Although several of the main characters are teens, it's not a YA book. I wouldn't call it horror necessarily, although there are definitely horrific elements. Heck, there's even dark humor and satire involved. And a love story is at the hear of a heroic quest. So...let's not put a label on it. If anything, it's a character-driven, suspenseful tragi-comedy of epic human and Godly "whoopsiness." But there I go again...labeling. 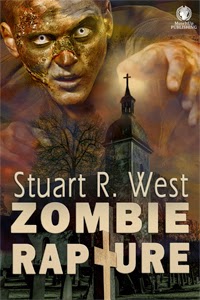 Let's have one of the characters speak for themselves. Meet Grandpa, aka Earl Wright. We pick up with him when he's first introduced in Zombie Rapture. Fair warning! Grandpa gets a little...um, cantankerous from time to time. Hold on tight:

Well, hell's bells! Bad enough my own kin stuck me in this waiting house of death--the Silver Years Nursing Facility is what they call it; more like "House of Old Biddies"--for a bad leg. A bad leg! I got more good years left on me than a cat's got lives. Hell, I once ripped the throat out of a rattlesnake. Never been scared of anything, saw front-line action in Korea.

But between you, me and my shadow? I'm a little spooked right now.

I'm holed up in my "luxury suite (nothing more than a ironing board bed, a bathroom fit only for little people, and a window that looks out onto a big ol' field of nothin')," got the door locked, a chair jammed up under the knob.

Why?  Can you hear 'em out in the hall? Pounding on my door? Spouting their nonsense? Something about "Praise him!' and "We want to save you!" and "Come to us, come to Him!" Usually the only thing they're screeching 'bout is they want more oatmeal or how it ain't fair Gretchen gets the run of the TV (damn controlling ol' bat).

That was awful in a whole different level of hell. But now? There's gunfire blasting down the hallways. More screaming than at a...who's that hot pop band that's so popular with the kids now?...Beatles (that's right!) concert. Fights breakin' out (although truth be told, that's something I'd pay to see). And one of these old coots has taken an axe to my door, trying to get at me.

Yep, I'm not ashamed to admit I'm a lil' scared. No shame in that. And the reason I'm shakin' in my boots? I don't understand any of this. A rattlesnake? Him, I get. Reminds me of myself, a tough, weathered and experienced survivor.

Here's the thing, though. Those crazies out in the hallway? I don't think they're alive. Now afore you think I've gone off my meds (never took the damn meds in the first place. Heh.), let me tell you what happened minutes ago...

I was hidin' out in my cubbyhole (socializing with the old folks? No thanks, not for me, no siree Bob cattail!), mindin' my own affairs. Well, the wrinkled ol' bat next room over wobbles in, pert near a creature on four legs with her walker, and starts spoutin' all her silly babblin' about come-to-Heaven and the rest of it. Of course, I tell her to get the hell out. Them words didn't seem to sit too well with her. She pulls out a steak-knife (where she hid it in her nightgown, I reckon I'd rather not know. Things are scary enough.)! A dad-gum steak-knife! She rushes me with it. Course I snatched it away from her. And still she wouldn't give up. Finally, I shoved the knife straight into her hand. Thwack! Went clean through! I give it a good yank, pull it out.

Not a drop of blood. Nothin'. Nada. Nunca. Zilch. Just a hole as black as the starless night.

So here I sit, waiting. I've called my boy, his wife. No answer. And now I've been tryin' to get ahold of my grandson, Hunter. Who I shoulda' tried first. He was the only one who didn't want to lock me up in this Godforsaken human mousetrap.

Now the door's beginning' to rattle, loosening around the hinges. Just a matter of time afore they get in. And I'd rather not go out by the hands of crazy, dead ol' folks, no glory in that.

There's Grandpa, one of my two favorite characters in the book. Who's the other? You'll have to read to find out (Hint: She's fourteen and just as tough as Grandpa!).