With Different Sight by Charles Mossop 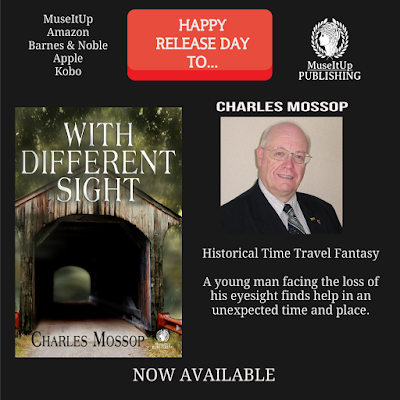 A young man receives a medical diagnosis which condemns him–or so he believes–to a meaningless and unproductive life as a disabled person, In a final, desperate effort to find a cure, he journeys to Boston. On the way, he meets a woman who seems to know about him, in spite of his never having met her before. This woman makes it possible for him to visit the world of eighteenth century Europe and America, as well as Ancient Greece. In these lost worlds of the past, he meets and converses with disabled persons, and comes to a new understanding of who he is and what life can hold for him.

About the author:
Charles Mossop, now retired from a forty-two year career as a post-secondary educator, administrator and private consultant in international development, lives on Vancouver Island on Canada’s west coast. Legally blind  since the age of nineteen, he enjoys hobbies of gardening and playing classical guitar when he is not writing. A long-time lover of mystery and adventure stories, Charles has become a professional writer and using his background as a social scientist and historian has published a number of short stories as well as numerous articles on historical fiction. His first novel, Jade Hunter,  appeared in 2007, and his second The Devil At My Heels, in 2010. Charles has recently completed a six-year term on the National Board of Directors of The Canadian National Institute for the Blind (CNIB), and now serves as President of the North America/Caribbean Region of the World Blind Union. As an advocate on behalf of people who are blind or partially sighted, he is active as a blogger and motivational speaker.