Pauline (P. M.) Griffin has been writing since her early childhood.  She enjoys telling a good tale, and since she always works with characters and situations deeply interesting to her, she finds the research as rewarding as the scribbling/keying.
Griffin’s Irish love of story telling coupled with her passion for history, the natural world, and the above-mentioned research have resulted in sixteen novels and nine short stories, two Muse Medallion Award winners among them, all in the challenging realms of science fiction and fantasy.
She lives in Brooklyn, New York, with her cats Nickolette, Jinx, and Katie and three tropical fish aquariums.

Who are some of your favorite authors?
J.R.R. Tolkien
Andre Norton
Jane Austin

What motivated you to become a writer and at what age?
That’s hard to answer.  I was playing with my own stories preschool.  I began writing “real” stories mid grade school, about fifth grade, my first novel in sophomore year high school.  (All of these were learning experiences, totally unpublishable.)  However, the moment when I knew I must write is fixed in my memory.  I was in the second grade, 7 years old, and I had borrowed Andre Norton’s STAR RANGERS on my first visit to the public library.  One scene so affected me that I knew I had to do the same thing, that I had to create on the same level, had to give on the same level.  I describe all this as an adult, of course, but I’ve never seriously wanted anything else.  That does not meant I did not intend to support myself and live as a decent, functioning human being as well.

What 3 words describe you as a person?
Animal lover
Responsible
Serious minded

What 3 words describe you as a writer?
Enthusiastic
Dedicated
Just plain happy writing (well, that’s more than a word, but it’s accurate)

When not writing, how do you spend your time? Hobbies?
I read, mostly nonfiction, interact with my cats, tend and watch the fish, listen to music.  I also speak with (via telephone or e-mail)  or see my brother and friends frequently.

Do you remember the first story you ever read, and the impact it had on you?
No.  I was reading preschool, at about 4 years old and had stories read and told to me prior to that.  I do know that I almost always took the tale in question, say “The Tree Little Pigs,” and carried it on in my mind, working out what the pigs and the wolf did next.  I would also try to figure out how the wolf came into the neighbourhood and set him on their track in the first place.

Describe your desk.
My desk contains the computer and peripherals, printer, some general reference material, and my pencil mss.

Who is the main character?
In HAUNTED WORLD, Ranger-Colonel Dermot O’Donnell, commander of the Fivenations’ Fourth Regiment.

What is his story?
O’Donnell was a Ranger occupied with wildlife study and restoration until the outbreak of a war propelled him into a combat command.   Currently, he is on assignment to prevent an anticipated invasion.  He must also interact with a large number of incorporeal neighbours while his regiment labors to raise the required defences.

Where/when does the story take place?
HAUNTED WORLD takes place primarily in a vastly altered continent that was once Europe  some six centuries after the near-simultaneous eruption of three supervolcanoes almost completely destroyed the earth and most of the life on her.

How did the story come to you?
The core situation for HAUNTED WORLD arose out of an article I had read.    It fascinated me.  I played with it for some time before the spark tying everything together arrived.  At that stage, I sat down and wrote the book.

Who is your target audience?
Since I write primarily in the fields of science fiction and fantasy, I naturally attract people who read speculative fiction.  However, anyone who enjoys a good story and reads reasonably well should enjoy these tales.  I know from my mail that men and women of every age and a multitude of professions are numbered among my readers.

What makes your book different from other similar ones?
The fact that my work is centered on the characters, human and animal, and carried by them rather than being focused on the dramatic events and conditions around them.  This is frequently not the case in speculative fiction.

The research is also thorough, and I respect my findings particularly in regard to the natural world and forces of nature featured in the tale.

What do your fans mean to you?
My readers are very important to me, especially those who take the time and effort to contact me with comments and/or questions.  I always respond and answer the inquiries to the best of my ability.  I take their ideas seriously and incorporated some corrections and suggestions in the later books of the Star Commandos series.  I’ve also entered into ongoing, long-term correspondence with a number of readers.

Where do you get the inspirations for your book(s)?
The ideas come as a flash, often no more than a line of dialog.  That’s what happened for STAND AT CORNITH, something the protagonist said near the end of the novel.  For HAUNTED WORLD, it was the idea of the lake’s erupting.  As I worked the scene in my mind, I could watch and feel along with the characters.

Any advice for new writers just beginning this trek down the wonderful world of publishing?
Write.  It’s the only way to learn how to use words, how to get them to convey your ideas and emotions to others.  They are to us what notes are to musicians and paints are to artists.

Remember, once you seriously begin to write, you may have to wait awhile to be a published author, but you are an author.  Don’t lose that knowledge.

Thank you for your time, Pauline. For more information on Haunted World which released today and Pauline's full list of published books with MuseItUp Publishing, please visit her AUTHOR PAGE. 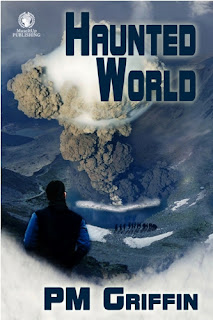