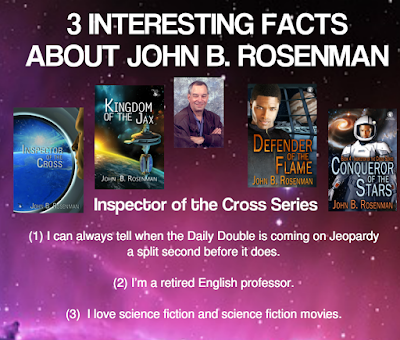 JOHN B. ROSENMAN was born in Cleveland, Ohio, and he is a retired English professor from Norfolk State University in Norfolk, Va.  He has published three hundred stories in The Speed of Dark, Weird Tales, Whitley Strieber's Aliens, Galaxy, The Age of Wonders, and elsewhere.  In addition, he has published twenty books, including SF novels such as Speaker of the Shakk and Beyond Those Distant Stars, winner of AllBooks Review Editor’s Choice Award (Mundania Press), and Alien Dreams, A Senseless Act of Beauty, and  (YA) The Merry-Go-Round Man (Crossroad Press).  MuseItUp Publishing has published five SF novels.  They are Dark Wizard; Dax Rigby, War Correspondent, and three in the Inspector of the Cross series: Inspector of the Cross, Kingdom of the Jax, and Defender of the Flame.  MuseItUp has also published the paranormal fantasy The Blue of Her Hair, the Gold of Her Eyes (winner of Preditor’s and Editor’s 2011 Annual Readers Poll), More Stately Mansions, and the dark erotic thrillers Steam Heat and Wet Dreams.  Musa Publishing gave his sci-fi time travel story “Killers” their 2013 Editor’s Top Pick award.  Some of John’s books are available as audio books from Audible.com.

Two of John’s major themes are the endless, mind-stretching wonders of the universe and the limitless possibilities of transformation—sexual, cosmic, and otherwise.  He is the former Chairman of the Board of the Horror Writers Association and the previous editor of Horror Magazine.

I grew up when there was no TV and listened to The Shadow and similar programs on the radio in the dark.  They fired my imagination.  Then books like Men of Iron and SF magazines.  I can recall scribbling cartoon panels when I was really small, five or six or so.  I liked to make up stories.  Oh, yes – my father used to tell me bedtime stories in the dark about a boy and his adventures.

It’s kind of messy.  To my right, a black tower of the PC; a 24-inch monitor in the center; to my left, a wireless modem and an ancient Samsung printer which I bought for $45.  I won’t buy a new deluxe printer until I use both my toners, which I bought on the cheap.

Who is the main character in Conqueror of the Stars?

What is his story?

He’s an elite agent or Inspector of the Cross who tries to save humanity from the aliens.   He’s lived 4000 years because he’s travelled in suspended animation between the stars searching for a device which can defeat the Cen.

I wrote the first novel in the series over thirty years ago.  The story just came, but also it was partly inspired by Joe Haldeman’s The Forever War, which is also about a hero/soldier who has fought to save humanity from aliens and lived over a thousand years.  Why did I write this?  It was natural, what was in me, and what I wanted to write.  But I write other things, too.

Science fiction and science-fantasy readers.  Much of my fiction has a traditional, Golden Age of SF feel and flavor.  Star Wars, etc.  Mind-blowing concepts that make your imagination stretch.  I hope readers who like such things will be drawn to my writing.

My hero has lived over four thousand years and has sacrificed everything to save the human race.  He has had many lovers and mates, and he has outlived his great, great, great, etc. grandchildren.  Also, the mind-blowing concepts, which I introduce to challenge the reader and myself.  Such as travelling down a black hole and what it’s like.

Everything.  Recently two readers asked me online when and if my next book in the series was coming out.  I live for that.

Sometimes it’s from almost nothing.  I used to go to a local Barnes & Noble and walk about, letting my eyes roam.  I’ve had stories leap almost whole into my mind in an instant from something I glimpsed.  In other cases, my inspirations are more structured and I can identify a specific cause.  Recently, for example, I was asked to contribute a story to an anthology of “strangely different” western stories.  That inspired me to write a story, “State of the Art” in which I combined a traditional western with science fiction. 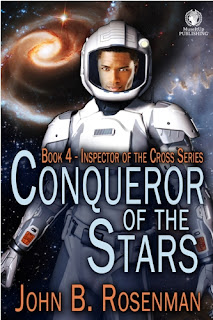 “Enemy Class I Battlecruiser nine point seven-three klicks dead ahead,” Doc said. Christ, this gigantic monster was practically on top of them with enough armor and firepower for a small fleet. Even at a hundred thousand kilometers they’d be gobbled up.
“Shields up!” he ordered, but of course Dr. Glitch had already done that as well as activated the sound suppressors to discourage eavesdropping.
He slipped into the command chair and strapped himself in. “Fire!”
Even as he gave the order, he saw that Sky’s ship had beaten their mighty adversary to the punch. Her missiles struck the Cen’s force field amidships, only to explode outward in a blinding white glare. An instant later, Turtan’s birds bashed them head on, likewise to little effect.
“Warheads coming in,” Doc warned. “I’m taking evasive action.”
Turtan saw the Cen missiles approach. Victory veered to the left, but the bastards were heat-seeking and hungry for movement, and they caught them right center. Their shield absorbed the blows and transferred their fury outward. Still, Turtan’s body rocked, and he heard the bulkheads almost crack.
“They hit Sky’s ship hard,” Doc said.
He couldn’t worry about that. After all, it was a warship, and Cen technology was superior to humans’. The best thing he could do for both of them was find a way to beat the enemy.