5 STAR Reviews for The Dark Days 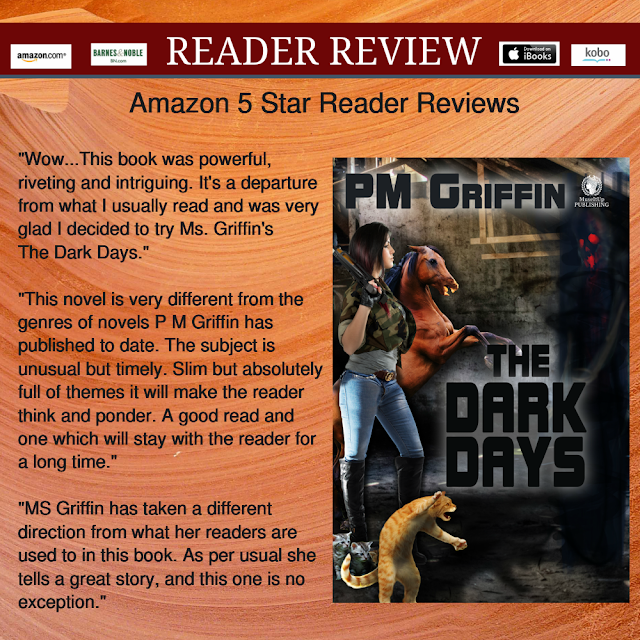 Awesome reviews for
The Dark Days by PM Griffin

As it becomes ever more evident that the long-promised divine chastisement is close at hand, Helena Moriarty, her associate Doctor Leonard Duck, and her family hasten to make what preparations they can and to warn others in the community around them. Disbelief is strong even among their own kin, and when the disaster strikes, all too many are unready to meet it.


The people and their animal charges brace themselves to endure and to survive as total darkness and bitter cold envelop the world. Fiery bolts sear downward, and walls of flame sweep through the streets, but these pale into insignificance as Hell’s demons are released to take whatever humans they can claim or slay those who refuse submission. These infernal entities cannot be fought by mere human strength or weapons, yet Helena must fight, or she will fail the two small creatures she is pledged to defend.

Sunday Musings: How and where to start


Everyone keeping well? Hearing my part of the world is getting a snow storm tomorrow. Well, you know what they say about March...in like a lamb out like a lion and vice versa. What does the middle of the month mean?


Last week we talked titles or story first and this week's question from my teen, I think, follows the next course:


How do you know where to start...how to start?


I generally dismiss my first idea for the start of a story on the grounds that if it came to me so easily, it's probably boring! Having done that, I try to think of something a bit more offbeat and memorable. Sometimes, I like to plunge the reader into the middle of the story first, then backtrack and find the real start of the story. Wherever I start, I always try to make it so interesting the reader can't wait to find out what happens next.


Knowing where to start a story is hard, and it's not something that I always get right on the first try. I have to write the story – the whole story – from beginning to end. Only after that can I go back and see if the first chapter – or chapters – are really backstory that needs to be cut and worked into the text bit by bit. Nothing, IMO, loses a reader faster that starting with a couple of chapters of background material.


I think about my seed idea until a potential book forms in my mind and then normally start at the beginning.  There have been a couple of cases where I began writing in the middle, continued to the end, and returned to do the beginning.  This happened with PARIAH.  I couldn't get myself to postpone the specific scene and so obeyed the book and went with it.  Everything worked out smoothly.  I've learned over the years not to fight with what my books or characters really want to do.


Usually I get a sentence in my head and I put it down. This will bring me to the next one and suddenly I have an idea. Or, as in the case of writing my sequel to If I Could Be Like Jennifer Taylor, “Who Is Jennifer Taylor?” I thought about what if we could see Jennifer’s side of the story and it brought me to the idea of writing about her the year after the first story.


I’m a plotter and before I start writing a new book, I create an outline. When it comes to writing the actual beginning scene, I do that much later.


I wait until I know my characters really well, and what secrets they might be hiding, and then it becomes clear where the story is supposed to begin.  I find it’s easier to have my characters fully fleshed out before I write that first page. When I know their quirks and habits, and I know what is coming ahead plot-wise, I can sprinkle in some in mystery and foreshadowing and humour and all the good stuff.


So, the beginning is really one of the last things I write.


And, yes, I'm putting this together in the right time to meet today's publishing...finally, LOL.


I think March's Sunday Musings are going to be one of our best months for topics...no not just my questions. My daughter has asked a few. But, let's get to one I'm asking and one I know LEA SCHIZAS, Publisher and Mainstream author:  needs a title first.


What comes first...title or story?


Usually I write the story first and then think of a title when I've finished, although sometimes an appropriate title pops into my mind while I'm in the middle of writing the story. I rarely think up a title first although at my writers' group we sometimes have writing prompts which may include a title and I quite like the challenge of writing a story to match it.


The story comes first.  Sometimes I know the title that fits it right away, sometimes coming up with the correct one requires a bit of thought and a few false starts.


That depends on the story. Usually the title comes first. With If I Could Be Like Jennifer Taylor I thought of the title and then began the story. The same is true with After, but the original title was When My Life Changed. With Who Is Jennifer Taylor? this was the question I had in my head when I started writing. She is discussed in the first story and we learn a little about her, but we don’t really know her life and why she is doing what she does. The main character in the first one is Carolyn.


For me, the story always comes first.


Now that I think about it some more, I knew the title of my next book long before I began to write it.


Oh....but I already knew the gist of the plot, so I’m back to my first answer.