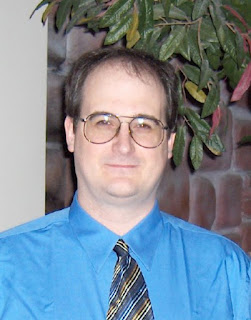 Cue the Sac
'Til Death
It's the Little Things You Miss

Glad to have you with us, Bill.


Who are some of your favourite authors?
Rex Stout
Raymond Chandler
Rhys Bowen
Jim Butcher

What motivated you to become a writer and at what age?
As a little kid, around 1974-75, I woke up early to watch Scooby Doo with every intention of solving the mystery. Part of that was coming up with my own ideas to fit the clues. I was about 5 then, but some of those altered endings have stuck with me to this day.

When Captain Caveman aired in 1977, there were two episodes that made me think I'd like to make up a story using those ideas. I've since heard one of those used in two different radio shows from around 1952.

Re-imagining the paths other stories might take continues to this day.

My handwriting is shameful, so I didn't toy with actually writing until I finally got a computer back in 1991 or so. What I did write, I kept to myself,

The next step was writing up the back stories of characters for an online computer game about super-heroes which I started playing in 2005. My group sponsored a contest, and I ended up placing second in one category and winning another, and the overall. Another story led off the second of two issues of the game's official fan magazine, and no one on the forums went out of their way to shred it. That made me think I might write well enough to try it for real.

I used a fan-fiction site for the game as a practice ground and got some good initial feedback, then took the plunge into the real world.

What 3 words describe you as a person?
Quick-witted
Reclusive
Rational

What 3 words describe you as a writer?
Vacillatious (How is this not a word?)
Unconvinced
Over-thinker

When not writing, how do you spend your time? Hobbies?
Plotting
Watching TV (For inspiration, you understand.)
Reading/listening to books, old radio shows, and music.
I'm sort of learning to paint.

Do you remember the first story you ever read, and the impact it had on you?
Not specifically. I started reading very young, but non-fiction. The first thing I remember was an Encyclopedia Brown collection. I'd already been a mystery fan for years at that point, so it just set the hook.

Describe your desk.
I do most of my writing at work, where I sit alone in a room and wait for a phone, which seldom rings, to break the silence. The desk is a large, office cubicle-style one with three tables and two walls. I use a blanket for a tablecloth. There are no windows, but I do have the feeds from four security cameras so I can watch the semi-feral parking lot cats, or the skunks and raccoons who share the lot with us.

At home, my cave is too small to lie down in. The desk is in the corner of the room and often has a cat on it. The floor is covered with small dogs or their toys.

Who is the main character in your series?
Raymond Jaye – Former Detroit Police detective who fell back to private investigation following an explosion that took his left hand.

What’s his story?
In Ray’s first story, Cue the Sax, we learn Ray’s grandfather managed to build a huge library of old radio shows. As a kid, Ray listened to them more than he watched TV, and they had an effect on him. When he was older, he joined the Detroit Police Department. After fourteen years on the job, he lost his left hand when he picked up a pipe bomb hidden in a beer bottle.

With his career and life at a turning point, he moved to Los Angeles to become a private investigator. That didn’t go well for reasons he’s not allowed to discuss due to a Non-Disclosure Agreement he signed to get his one paying job. He left LA and moved to what he thought would be the more morally acceptable Salt Lake City, Utah.

These facts came out during the interview with Detective Ortega following the death of a woman who Ray claimed knocked on his door, passed out in his arms, then woke up and jumped from his third-floor balcony. Ray eventually discovers the truth about her death.

In Til Death, we learn more about his past, including the fact that he was nearly killed when he stumbled upon a serial rapist in Detroit. His first day back to work ended with a second chance encounter, and the death of the rapist, at Ray’s hand.

News archives of those events led to his being drawn into a case in Salt Lake City many years later.A woman named confessed to her big, but dim, husband, Ernie, that she’d been having an affair. She named Ray as her partner, much to Ray’s (eventual) surprise. The men first met when Ernie attacked Ray, and their first talk came at gunpoint. When Ray suggested they go speak to Ernie’s wife to clear it all up, Ernie agreed. They found her dead on the kitchen floor.

During the investigation, Ray met two more people who will become involved in his life to some extent. The first is Charlie Watt, another private investigator. The second is Nancy, a waitress at Vickie’s Kitchen. Nancy will become a friend and advisor to Ray as time goes on.

It’s the Little Things You Miss refers to both the small details often overlooked, and the small traits of those who have left this world before us. For Ray, the latter brings back memories of a woman he knew back in Detroit, as he searches for Eric Tanner.

Future stories will expand on his history, as well as see Ray finally deal with the loss of his hand, find an office, make friends and allies, and even (possibly) find a family. Of course, not all changes will be in his favor.

Where/when does the story take place?
Ray lives and works in the modern world, in Wasatch Hills, which is a fictional city on the East Bench of the Salt Lake Valley. On a real map, it would exist between I-215 and 9400 South, and east of 700 East all the way to the mountains.

How did the story come to you?
This one came slowly, with many changes and versions. The main idea evolved from another story I wrote, where a minor character hid a message using the order of the CD's on a shelf. The idea being that anyone searching for a message would destroy it when they rifled through the discs. That eventually led to the idea that nearly everything around us could be a message in some form or another, but we never think to look for them. The story shows several examples of this.

Who is your target audience?
Anyone with an interest in the old radio shows, detective stories, or someone who just likes a guy who's tough without pushing the boundary of super-heroic.
What makes your book different from other similar ones?
Most private eyes are established and experienced. Ray is not. He's a good investigator, but he still thinks like a police detective. In some ways, that makes his an ‘origin’ story as he learns the tricks of the trade.

What do your fans mean to you?
The existence of fans means I've met my first goal. I've written something that people, who feel no sense of obligation toward me, don’t hate. In turn, that instills me with a sense of gratitude, and puts the pressure on to make sure the next one is at least as good.

Where do you get the inspirations for your book(s)?
Inspiration comes from everywhere. It might be a passing phrase overheard in a restaurant. It might be the way I think a movie will turn out based on the first three minutes. Old radio shows play a role in the style and flow.

For other stories, it's a more direct approach where I think, I'd like to do a story about X, then power though until I have one.

Still others come to me while I'm daydreaming about something else. Most of these happen in the shower.

Thank you for your time, Bill.

Book 3 from his series, It's the Little Things You Miss, is now available at a super deal. 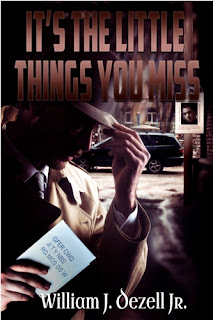 Raymond Jaye figured fourteen years as a cop prepared him for anything he could encounter as a private eye. He was wrong.

Eric Tanner was missing. That much was true. But was he really in danger, or just nuts?

Erica Tanner, Eric’s headstrong twin sister, begins her search by hiring some help. All Ray has to do is watch her back while she follows Eric’s trail of cryptic notes all over town. A trail that crosses paths with a killer.

Is Eric imagining things, or is he hiding because he saw the murder?

Once the gunfire starts, Ray falls back to what he knows and sets off to get one step ahead of a desperate man.

He should have tried for two.