The Story Behind Isle of Savages by T. Briar 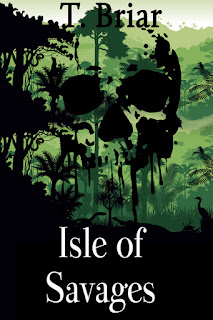 Have you heard the story behind Isle of Savages
by T. Briar?

Hi, there. My name is T. Briar, the author of Isle of Savages. Thanks for taking time out your busy day to drop by the MuseItUp blog to visit with me. I really appreciate it.

Now I have a few confessions to make… Isle of Savages isn’t my first published book. As a matter of fact, I’ve published twelve other books in a different genre.

You see, I never really had any aspirations of becoming a thriller writer even though I’ve always loved the adrenaline rush the genre provides. Yep, survival tales rank especially high on my reading list.

You probably know the kind of tale I’m talking about. It’s always set in some sort of dark and foreboding environment where the threat of imminent death looms around each unexpected twist in the story. And you just know that with one accidental misstep the hero’s and heroine’s lives will end in bloodshed. Without a doubt, those are my absolute favorite kind of thrillers to read.

But still, I never thought the genre was for me as a writer. I mean, when I first started writing, life sort of pushed me in the other direction. And, after many years of dedication to learning the craft of writing, I finally got a book published. Other books followed the first. One of them even became an Amazon Bestseller.

So how in the world did I ever come to write Isle of Savages since I’m adamant that I never thought I’d write something so different from my usual genre?

Well, it’s not that complicated an answer. I simply saw Eric in my mind’s eye, lying face-down in wave-wash, coughing and sputtering, simply trying to live.

At the time, my first thought was: What in the world happened to you, buddy?

When he didn’t answer right away, I decided to take a closer look to see what was going on with him. Yeah, just call me a Good Samaritan because I couldn’t let him or his story die on that beach, all alone in the dark.

To my immense surprise, by the third page, I was completely hooked on the story. I quickly discovered that Eric was only seventeen years old and had shipwrecked along with a group of students on a seemingly deserted island. That he was desperate to reconnect with his only friends amongst the students, Mia and Keri. But the girls are nowhere to be seen.

To make matters even worse, the despicable captain and his watchdog of a first mate have survived also. Those two villains have sinister plans for Eric, Mia, and Keri, as well as the other students if they can only catch them.

The hair-raising chills and thrills that followed were especially exciting to write.  On one hand, the captain and first mate are treacherous adversaries for the trio. On the other hand, the subhuman inhabitants proved themselves even more treacherous as they start collecting what the storm has delivered. No one was ever really safe and it was a race to the finish to see who would live and who would die. And yes, people did die on the island. Some even died badly.

To be totally honest, once I’d finished writing it, I reread it and thought it a pulse-pounding story, full of unexpected twists and turns, and adrenaline-filled to the very end.

But what was I ultimately going to do with it? I wasn’t a thriller writer. I’d always written in that other genre.

As it turned out, I agonized for over two weeks before sending it in. I finally decided I couldn’t not send it in. Lea Schizas, my publisher and editor, said she’d take it on and here we are. Only a little over a year later and it’s releasing on June 13th.

Now you know the story behind the story.

Oh yeah, I almost forgot. One last confession to go. In that other genre, I go by the name of Thomas Briar.

Thanks again for visiting with me today!

T. Briar’s Bio
Always striving for pulse-pounding action, sitting-on-the-edge-of-your-seat suspense, and hair-raising thrills, T. Briar’s mainstream thriller writing places courageous heroes and heroines in the fight of their lives against the elements, hostile surroundings, morally bankrupt villains, and any other obstacles T. can think of.

But be warned, once the wheels are set into motion with the first sentence, it’s a twisting, turning journey to the end to see who lives and who dies. And make no mistake, someone’s going to die. Some will even die badly. That’s just the way it is when fighting for survival under perilous conditions.

T. Briar’s target audience is New Adults who boldly step up to meet life’s challenges with the confidence of youth urging them on.

Through strangled, sputtering coughs, Eric Kovac’s eyelids flickered open to stark darkness. He lay face down in receding wave-wash, naked except for a pair of board shorts, drenched to the bone. A tortuous grittiness seared the tender linings of his mouth, nose, and throat; pain wracked his body, inside and out. As he struggled to make sense of his peril, the sound of crashing waves thundered. A sudden rush of warm saltwater buried him underwater.

Choking and coughing violently, he forced himself up onto his hands and knees, stomach clenching in excruciating spasms as he vomited up great bouts of saltwater. Although the purging left him weak—on the verge of blacking out—it cleared the irritating sand from his breathing passages. Survival instinct, more than cognizant reasoning, sent him crawling further up the shoreline. After only a few feet, his battered body could go no further and he collapsed onto wet sand while his feet and legs still lay in the incoming tide.
The sound of crashing waves slowly returned, and with it, the recognition of something new. Wind buffeted his body from all directions…storm-washed, freshly cleansed wind. Beneath the dizziness threatening to overwhelm him, he had only one coherent thought.

What happened to me?

For the life of him, he couldn’t remember how he’d come to be on this beach, hurting and possibly grievously injured. Despite the horrendous pain, he rolled over onto his side to lift himself on an elbow and scan the darkness for clues.
In the edge of the surf, a dark silhouette resembling the shape of a human body floated, the incoming and outgoing surf pushing and pulling at it. It was a tossup as to which would win the tug of war.

Instantly, the memory of the ship’s boom careening into his forehead materialized out of nowhere. In something akin to shock, distorted memories of the chain of events leading up to the blow that had laid him low flitted through his mind…
The storm had come out of the northwest late yesterday evening, the leading edge blue-black and roiling. It’d chased after them relentlessly, finally howling down on their sixty-foot blue water cruiser in the middle of the night, crackling long streaks of lightning that were blinding in their frequency and intensity. Fierce winds and towering waves tossed the yacht to and fro as if it were a toy. Deafening claps of thunder reverberated through the vessel to drown out the terrified shrieks of the sixteen students cowering below deck. Then, without warning, when only the tiniest tendril of hope remained, the yacht ran into something, cementing their fate—

That’s right! We’d run from the storm well into the night, hoping to angle out of its path to safety. But we hit something…

Snapshots flashed through his mind, one after the other in quick succession: the sickening crunch of fiberglass shattering; the non-stop rush of water breaching the hull; the ear-splitting cries of his classmates’ despair; the captain ordering everyone from below deck to abandon ship; the screeching wind and stinging rain above deck merciless; brilliant veins of lightening illuminating the pitch blackness to reveal the shoreline of an island; so much water in the air, breathing seemed almost impossible; a boy and a girl at the very end of the line of joined hands snatched up like kites and flung out into darkness; the terrifying fear that the rest of the line would quickly follow; the glassy, shock-stricken stares of his classmates waiting their turn to be helped over the side into the life raft; the white boom breaking loose from its mooring and whipping toward him; trying to duck and almost making it; total blackness…

Eric, trembling in the aftershock of surviving the impossible and being grateful simply to be alive, remembered something else…there had been a girl he was intent upon saving…and one of her friends. He’d helped them into the raft right before his accident. But what were their names? Who were they to him?

He concentrated on summoning their faces, unable to shake the feeling they had been his close friends, or perhaps, one of them had been more than a friend.

Slowly, like gooey fluid forced through a half-clogged strainer, the image of a dark-haired girl—seventeen years old and of Asian-American descent—with a beautiful oval face, olive skin, and dark eyes took form in his mind’s eye. The face of a pretty, blue-eyed blonde with curly, shoulder-length hair quickly followed.

Mia! I was trying to save Mia Miller! And her best friend, Keri Shaw!

Peering at the floating body again, a burst of adrenaline coursed through his veins, energizing him into action. The sickening hollowness in his stomach and the aches in his body disappeared. He flipped back over onto hands and knees to scramble toward the dark silhouette in the white surf. As of yet, he couldn’t tell if the body was male or female.

Please don’t let it be Mia. Please, anyone but her.

His eyes made out what he thought looked like the muscled back and arms of a young man and his fear receded…somewhat. Grasping the corpse by the hair of its head, he lifted the face out of the water to ascertain that it wasn’t Mia—instead was Charles Darry, a Low Country kid from South Carolina. He’d been the only other Southern student on their cruise of horrors, which had given Eric and him something singularly in common, although they had never become what one would call friends. He released Charles, frantically glancing around the darkness.

“Mia!” he attempted to yell, but the name came out strangled and weak. He tried again and it came out clearer and louder this time.