Seasonal Effects on Writers and Their Characters 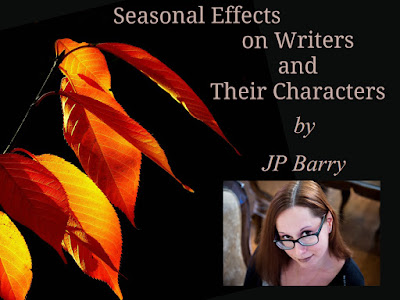 Seasonal Effects on Writers and Their Characters
by JP Barry
Dusk approaches where days often began mere weeks ago.  Soft colors vanish under the unstoppable control of new, daring, bright ones that are ready to invade a palate far too mild for their liking.  The light breeze once felt against our bare skin is gone, now replaced with layers of protection used as a shield from the elements.  An amber haze sets the sky on fire with striking shades of violet, orange, and yellow.  Instead of fresh linen and honeysuckle, we now take in an earthy, sweet pleasantness.  Lush green grass turns into crunchy leaves underfoot.  Within a moment, carefree days become filled with anticipation for new beginnings and holidays.  Some enjoy and embrace the boldness and the pumpkin spiced smells of everything, while others muddle through.

I’m okay with waving goodbye to spring and summer, mainly because I’m not a fan of playing daily games of hide-n-seek with the hot sun.  At the first sign of fall’s impending arrival, something awakens.  Exactly what?  I have no idea, but, the draining heat of those previous days vanishes, transforming into a surge of the senses.  Perhaps the colors, sights, sounds, darkness, and chill all work as one to inspire; but my soul comes to life and remains that way until spring returns.  In the midst of one of the busiest times of the year, my characters come back to life, much like myself.  Of course I write and edit April through September, but the fall and winter months have always been more intense, producing a far better output of work.

As time changes for the character, much like the seasons, each creation responds differently.  In The Nearer the Dawn Saga, many positive events occur for Nina, Chase, Gabriel, and Orifiel starting at summer’s end, while most of the major negative ones happen when winter closes.  Now, this isn’t to say, good things don’t happen in June or July for anyone in this series. It’s perhaps an unconscious glimpse into me, the author, and my preferences.

Some characters, such as Olivia and Jax, in The Cain Trilogy never discuss seasons.  Life for them is one continuous moment.  Maybe they’re overworked or other elements of existence hold more importance to them, because they’ve never expressed the desire to speak about holidays or seasonal snapshots of time.  However, for someone like Cain, this wouldn’t be the case.  Holidays would be spiked with pleasure and pain.  Pleasure drawn from material gain from receiving presents, but pain because of family circumstances, being ignored by others whom are suddenly busier than normal with their own non-dysfunctional families, and distress over lack of customer’s money because they can’t afford to pay him a visit.  I’d imagine he’d loath the beginning of fall and the self-reflection it would cause, and much like a squirrel, would deem this a time to stock up and store not only cash, but an emotional supply of some kind to sustain the cold, long, winter.

Honestly, until this blog idea was pitched, I never thought much about this topic.  I’ve always been aware that this time of year was a personal favorite, but never put much stock into how seasons actually affected my writing, or if they even did.  Apparently, they do.
For now, as the air hints and teases with moments of cool crispness, this author will happily pack away her tank tops and flip-flops, eager to throw on a warm cozy sweater and pair of boots.  Goodbye, iced coffee.  Hello, hot pumpkin, spiced latte patiently waiting for me to sit in front of the computer as creativity once again bleeds through my characters in a way only fall will allow. 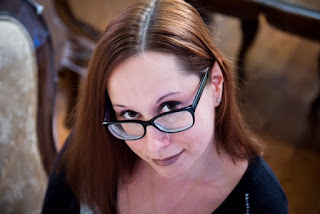 J.P. Barry is a freelance writer from New York. Combining her passion for all things spiritual and romance, blank pages began to fill with the words for The Nearer The Dawn Saga. 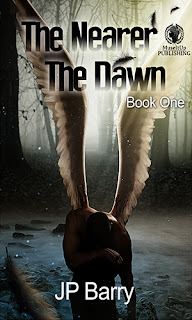 One moment can change everything … Darkness is near. 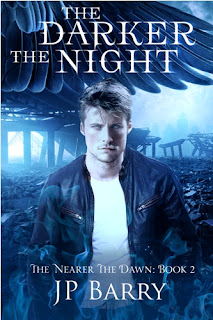 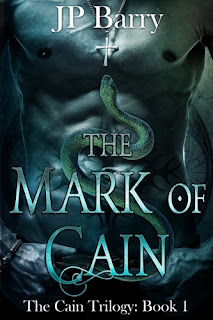 He'll leave an imprint so dark and deep you'll be branded for life with his mark - the mark of Cain. Are you ready to beg for mercy?